And now, for a few words (well, more than a few) about wordless spreads in picture books...

I'm a published poet, so I feel I have some justification for writing a rhymed text. But what about those illustrator notes? As Deborah Underwood once said, "It's not the illustrator's job to tell you what to write -- just as it's not your job to tell her [or him] what to draw." I agree, whole-heartedly! So...why the notes?

Long-time readers of the GROG may recall my fondness for making picture book dummies by laying out my text in spreads that mimic a finished book. When I did so with the new book, I discovered a spot where I could cut lots of text by letting an illustrator go crazy with a wordless spread.

Before hitting the "submit" button, I thought it wise to study up on picture books that contained just one or two wordless spreads, to see if my suggestion made sense. I knew of several books to consider, and a shout out to members of PiBoIdMo bolstered my list.
I discovered some interesting things:

From my sampling (16 books), a wordless spread was more likely to occur in the second half of a book.

Wordless spreads were as likely to occur in books authored and illustrated by different people as those by author/illustrators.

In many of the books, the spread served as a pause or slowing of pace, a chance for the reader to reflect.

The spreads served other functions and conveyed varied messages (sometimes more than one, which is why the percentages below add up to way more than 100%!).

• 50% were humorous (many LOL). A majority of these happened in the second half of the book.
• 50% demonstrated change, either within the character or in his/her situation.

• 33% portrayed setting out on a journey or adventure
• 33% showed a difference in size or scale. This contrast between two characters, or between a character and the surroundings, elicited a variety of emotions from fear to loneliness to sweetness to wonder.

• 25% portrayed the culmination of a quest/resolution of a problem.

• One book introduced the main conflict through a wordless spread early on (pages 10 & 11).
• The spreads were all worth their weight in wordless gold-- with the illustrations doing the work of many, many words. 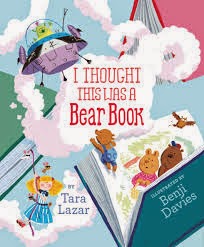 Tara Lazar mentioned that her upcoming book, I THOUGHT THIS WAS A BEAR BOOK, contains a wordless spread. I asked her about it.

Me: Where does it occur?
Tara: The wordless spread is in the second-to-last spread in the book, right before you make the final page turn.

Me: What's its purpose?
Tara: It restores a sense of calm to the reader and conveys that everything has been settled. (Or has it????) It gives the bears some time to return home.

Me: Did you request the wordless spread?
Tara: This wordless spread was not in the original manuscript. It was suggested by my editor and illustrator after we made changes to the resolution. It helps with the pacing and sets up the final guffaw.


In the end, I feel a bit bold to suggest the wordless spread, but I feel it's the best vehicle to show lots of activity and a passage of time. Reassuringly, my sleuthing uncovered QUEEN VICTORIA'S BATHING MACHINE by Gloria Whelan and Nancy Carpenter. 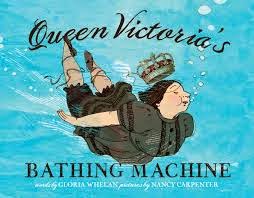 Like my manuscript, this story
1) is written in rhyme
2) is rooted in history
3) contains a wordless spread at the same spot that I am considering
4) shows the resolution to a problem

And so I am emboldened to go where manuscripts are suggested not to go -- to submission, WITH illustrator notes! Wish me luck!

Thank you to Tara Lazar! (Visit Tara here.) Thanks also to PiBoIdMo members for your suggestions!