Bookish books to the Rescue!

Button It! The A, B, Cs of a Closed World
Sneeze! - Achoo! to Zeus!
Ancient to Zebra, the A,B, Cs of Lint
(In my defense I have heard someone say Zeus! when a sneeze escapes.)

But I do have a real alphabet book I think most writers can enjoy.

Through my interest in the 26 letters,
I found MYSTERIES OF THE ALPHABET by Marc-Alain Quaknin.
This illustrated guide to nuances of each, reveals
the discoverer of the believed-to-be first alphabet that led to ours,
(which was all consonants) Sir Flinders Pietrie, in 1905 in the Sinai Peninsula.
It also reports that my favorite letter - A - called aleph, represents the ox,
or strength. It explains why O is round. And much more in 368 pages, with
lavish illustrations. What would happen if you invited students you present to/teach
to invent their own letter? This book is a font of creative eyedears.

There is a very fine picture book for young readers on
A through Z - OX, HOUSE, STICK, The History of our Alphabet, by
Don Robb with illustrations from Anne Smith.

Back to adults, the alphabet picture book by Steve Martin & artist Roz Chast
is a hoot - THE ALPHABET from A to Y with BONUS LETTER Z!
(Also suitable for high school students & some middle graders.)

For fun, here are other bookish books.  While not guides
to spark writing or filled with ideas about honing the craft,
they tickle my softball-sized gray matter & get neurons pumping.

People Words by Bill Severn explains the origins of cereal,
(Roman agricultural goddess, Ceres, gardenia (one Alexander Garden
who worked in South Carolina) mentor (friend of Homer’s Odysseus),
shrapnel, (an English artillery officer) & many others in 174 pages of
eponyms, a person or character whose own name has become a term.


What the Dormouse Said, collected by Amy Gash with illustrations
from Pierre Le-Tan. You'll find clever cautions from our favorite characters
in The Phantom Tollbooth, Winnie-the-Pooh, The Yearling,
The Trumpet of the Swan & about 200 other books.
As in -
“I never knew words could be so confusing,” Milo said…
“Only when you use a lot to say a little,” answered Tock.
-Norton Juster, The Phantom Tollbooth

Rotten Rejections, A Literary Companion is edited by Andre Bernard.
If we feel a rejection note is unworthy, take cheer with these actual editorial
rejections of manuscripts.
For example, on Christina Rossetti’s classic, GOBLIN MARKET, the editorial
opinion was, “She should exercise herself in the severest commonplace
of meter until she can write as the public likes…”

In a favorite drawing shared in BOOKS, BOOKS, BOOKS, a librarian at a huge
desk doesn’t look up at the patron while intoning, “You have find the Do-It-Yourself
Books, yourself.” Edited by S. Gross and Jim Charlton, each page brings a chuckle to
me. Another source of laughs is The New Yorker Book of Literary Cartoons,
collected by NY Cartoon Editor Bob Mankoff, featuring
Roz Chast, Edward Koren, James Thurber, Mankoff himself & many other huge talents.

Finally, it is pure pleasure to settle in, every few years, with Helene Hanff’s
84, Charing Cross Road (made into a movie, too) This slim volume is the
clever & also bittersweet story of one American writer’s developing love
for a previously unknown to her British bookshop, fueled by parcels of book
& paper letters sent back and forth across the Atlantic Ocean. Favorite quote: “I do love
secondhand books that open to the page some previous owner read oftenest.”

I'm popping bookish books into a spiffy Silent Auction donation bag
for the FL-SCBWI MidYear Conference & I'm curious to see what auction item
I might win. And to see friends & make new ones. And most of all, to learn everything
I can about providing great stories for young readers in this digital age. 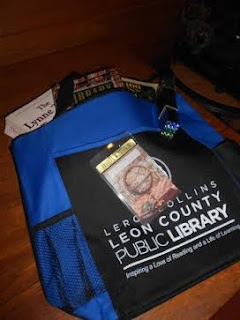 Everyone who has shared here on their retreats/conferences set a high bar with those
articles & I'll hope to also provide a nourishing report later this summer back here
at Good Ole' Group Blog. (p.s. this image was taken before I spiffed/puffed/charmed
up the bag...)