Chatting with YA author Ann Jacobus about her debut novel: Romancing the Dark in the City of Light -- Christy Mihaly

Are you interested in books for young readers about serious issues -- like depression or suicide? Could you use a few pointers about school visits? You'll love today's interview.

I’m thrilled to be talking with a college classmate, Ann Jacobus, for GROG. When Ann and I knew one another many years ago, neither of us could have predicted that our paths would be crossing decades later in the universe of YA/Children’s Literature.

Ann’s debut book, Romancing the Dark in the City of Light, was published by St. Martin's Griffin/Macmillan in October. (Read the Publishers  Weekly review here.) This brooding and funny, dark and hopeful YA novel is set in Paris, where Ann was lucky enough to live for several years. Ann and I met up again recently in San Francisco.

Ann, thank you for agreeing to answer some questions for GROG.

AJ: Thank you for having me here, Chris! 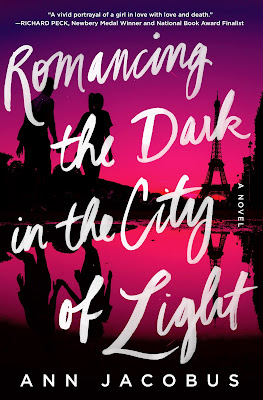 Q: Congratulations again on the publication of Romancing the Dark in the City of Light. After reading your wonderful book from cover to cover, I have a few questions.

It's such an intriguing title – did your manuscript always have this name or did it develop over time?

AJ: The working manuscript had at least three different titles over the seven years it was “in development.” Before submitting to editors after a final (umpteenth) revision, I came up with a list of probably 90-100 potential titles with my agent, and then asked friends to vote. "Romancing the Dark in the City of Light" won, although we thought it was possibly too long and submitted under "Romancing the Dark." My editor preferred the long version, and she was right.

·  Q: I love hearing about all those titles! Tell us about writing this book. It deals with mental health issues, including depression, alcoholism, and suicide. What drew you to these topics? Did you start out with these themes in mind?

AJ: In late 2003—we were living in Paris at the time—someone ended up on the tracks in front of our metro train. I was with my daughter and got her out of there as quickly as I could so never learned exactly what happened. However, since I could find no mention of it in any media afterwards, I had to assume it was a suicide, as an accident or homicide would have been news. The incident haunted me, and I started writing about it several years later.

I’ve been interested in the subject of suicide since I was a teen. I’ve done a fair amount of reading and research over the years and have volunteered on a couple of suicide crisis lines (currently San Francisco Suicide Prevention). I wanted to write a book about a suicidal protagonist, with a hopeful message. Lots of YA novels deal with the effects of suicide on others, fewer are told through the POV of someone who is suicidal. I struggled with feeling suicidal as a fifteen year-old, briefly, but unforgettably. I spoke of it to no one at the time. Decades later, I acknowledged it only after I started writing about it. There's a stigma about suicide that makes most of us uncomfortable. Sadly, it affects far too many teens but we can fix it if we’ll talk about it.

Alcohol abuse often goes hand in hand with both depression and thoughts of suicide. Alcohol can be used to “self-medicate” by those suffering from mental anguish, and it can remove inhibitions that might otherwise prevent someone feeling suicidal from attempting. While I didn’t start out planning to include alcohol in the story, it was a natural fit and helped make things tougher for my protagonist–which of course, is what we writers must do.

·  Q: Your book has a lot to teach readers of all ages.
What’s different about your life, post-publication – what does being published change?

AJ: Publishing a novel with a major house was definitely a big milestone and one I worked toward for fifteen years. But it happened in so many increments over such a long period of time in my case, that it doesn’t feel much different! The biggest moment had to be when my agent and I received the offer to buy my manuscript. After the contract was signed, I felt like a published author but it was another year and a half until the book came out. Having less time to write my next novel now is one of the more challenging differences of life post-pub.


·  Q: Have you done school visits? What do you like and dislike about them? Words of advice?

AJ: I’ve only done a few school visits, and I really enjoy them. RTDITCOL is appropriate for high school-aged kids and up. I have taught writing to younger kids and adults both, but talking about this edgy story as well as mental health with high school-aged readers is especially rewarding. They aren’t as locked into the stigma and are open to information about suicide and its prevention. There’s a lot we can discuss and share, and getting teens (or any students) involved in interaction helps hold their attention. Visuals help too, but you need to be able to carry on if the projector doesn’t work.

I try to think in terms of the audience. What information will interest and help them? Also, how can I entertain them? In this case, I’m giving them facts about suicide prevention. They also want to know about us as authors, but not too much. How did we get where we are? What did we have to overcome? How did the book evolve from idea to printed copy? It’s fun to show them how nerdy I was at their age and also let them in on a few inside secrets, i.e. chewing bubble gum aids in concentration and is my go-to for solving plot and character problems. One high school student assured me that studies have shown chewing gum improves concentration and focus.

The best advice I ever got about visits is “over prepare, then go with the flow.” Things will go wrong or at least not as you planned, so having back up plans and knowing your stuff cold is key. Finally, allow yourself to be nervous. Work with it and it will (ideally) eventually go away.

·  Q: What other promotional efforts have you made? How do you feel about this aspect of the writers’ life?

AJ: YA readers are online and can be reached via the hundreds, probably thousands, of YA blogs out there. Most of my promotional efforts have involved interviews and guest posts with YA blogs starting as early as last spring with the Fearless Fifteeners, a group of YA and middle grade debut authors with novels coming out in 2015. To date I’ve written about 25K words total, many for a “blog tour” that took place in the weeks around release.  Then social media, especially twitter and facebook, along with my web site, support all my other efforts. Targeted conferences are another good bet, such as those for YA librarians, or YA novel cons or festivals. I hope to land some presentation opportunities at mental health gatherings. You can see one of the big YA blogs here.

While I’m not as crazy about promotion as I am about writing alone at my desk, I am up for talking about mental health and suicide, especially with teens, anytime, anywhere, and am grateful for any opportunity to do so.

·      Q: Is there anything you wish that you had known before you started on the path to publication?

AJ: I would try to make better use of the time prior to publication for working on the next novel. Yes, I heard this advice a long time ago but didn’t heed it. Also, don’t be afraid to throw out entire scenes that aren’t as strong as they need to be. Every time you re-write something it’s better (usually, anyway). Keep re-writing, re-visioning, not just tweaking the same stuff over and over. Finally, more than anything else, we need perseverance and patience. I heard that, too, and didn’t quite believe it.

·   Q: Great advice, no matter how many times we hear it! What’s next for you in your writing life?

AJ: I’m working on a companion book to RTDITCOL that takes place a year and a half later in San Francisco and features some of the same characters as well as some new ones. For a complete welcome change of pace, I have a middle grade novel about a talking, flying dog I’d like to revisit, as well.

Many thanks for your time, Ann. And below are some resources (with links to websites) that Ann has provided, about suicide prevention and related topics:
Ann Jacobus earned an MFA in Writing for Children and Young Adults from Vermont College of Fine Arts. She lives in San Francisco with her family.
Find her at: www.annjacobus.com.
Twitter: https://twitter.com/annjacobusSF
facebook: https://www.facebook.com/annjacobus.author

For books tackling tough topics for younger readers, see our earlier GROG post about picture books on these subjects. Thanks for stopping by GROG today.
Posted by Christy Mihaly at Friday, December 11, 2015