Lola Schaefer Discovers a Book in an Acorn

Lola Schaefer has written more than 270 books, from picture books to easy readers and informational texts – and she’s still got more to come. One that particularly caught my attention is Because of an Acorn which she wrote with her son Adam, also a children’s author. I love the simplicity of the language in Because of an Acorn, and the ecological layers that are revealed page by page.

Ideas for books come from many places, says Lola. This one grew out of a conversation with her editor at Chronicle. It turns out that the Natural Resources Defense Council (NRDC) partnered with Chronicle Books in an effort to inspire young people to safeguard the earth’s natural resources. The editor asked whether Lola might be interested in writing a book that highlighted some aspect of their conservation work.

After checking out projects NRDC was involved with, Lola decided she wanted to visit and write about the Cumberland Plateau – a diverse hardwood forest ecosystem stretching across a broad swath of the southeast United States. She made a few calls and found a ranger at Fall Creek Falls State Park in Tennessee who would share his knowledge of the forest.


For three days, Lola headed out with state naturalist Randy Hedgepath into the woods. As they walked, Randy stopped every now and then to elaborate on individual plants and their relationship to each other and the forest.  That’s when Lola found her story. “Everything comes down to the acorn,” she said.

In writing a book, as with teaching, you have to know so much more about your topic than you’ll ever put in the book. “You have to immerse yourself in the topic,” Lola said, noting that only a small part of that information actually makes it to the book. During her forest walks she took lots of notes and drew sketches. Once home she added these to her inch-and-a-half-thick file of research notes. Now all she needed was a structure for the story. 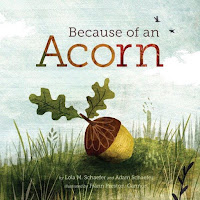 
Not one who readily gives advice, Lola shared a couple things she’s learned on her writing journey.

As for agents, they may be more important now than a decade ago. For the first 10 years of her writing career, Lola didn’t have an agent. Now she does, and believes that they do play an important role in the submission process. “A single editor can receive 8,000 manuscripts a year, and of those only 80 might be well written,” she said. When a manuscript comes from an agent, it lets an editor know that someone other than the author has had eyes on it.

Lola has a new book coming out in July called Hidden Dangers. Learn more at her website.
Posted by Sue Heavenrich at Monday, February 06, 2017