FAMOUSLY PHOEBE thinks she's famous and who among wouldn't like to be famous for a bit? I predict PHOEBE will be famous as she finds her way into the hands of children and parents everywhere. Phoebe and Lori have toured several blogs since the launch last week, but hopefully you'll glean more from our Q & A as she answers my writerly questions. Go scout out Phoebe at your favorite book store/library NOW.

Oh-oh, this just in... we have a winner from Tina Wheatcraft Cho's post last week. Rebecca Koehn you are now famous for winning  the very famous Alayne Kay Christian's chapter book critique of the first three chapters of your chapter book. Please message me or Tina via Facebook. 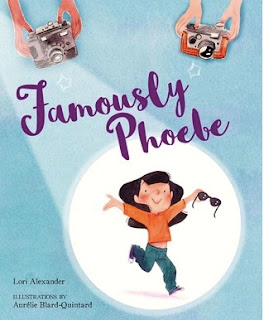 Phoebe's been under the lights for as long as she can remember. Parents, grandparents, her adoring family have surrounded her with love and camera time. From her point of view this means... she's famous. As first born, Phoebe enjoys her portrait gallery and the perks of being only child, until another ingenue steals the spotlight. Little sister Rose now receives the star treatment, but Rose is fussy and demanding. She doesn't even like the camera until big sister Phoebe makes her smile with her antics. 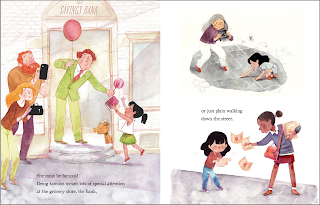 This is a fun, modern twist on the evergreen topic of sibling rivalry and new baby. Yet, in Lori's hands, the theme of looking at life via the camera or ever-present "device" is also addressed in an engaging way. Lori weaves fabulous vocabulary and star-studded situations into Phoebe's story for great effect. Even though it's a long picture book via pagination, it feels short and bouncy. As a writer, I especially appreciate her spare text, deadpan humor, and use of page turns to develop rhythm. May I say...a star is born with this book. K: I seem to remember that your son inspired BACKHOE JOE, correct? What was your inspiration for this book?

Lori: Great memory, Kathy! This time, it was my daughter’s turn to inspire. I was a shy kid and still quite the introvert as an adult. Not sure how I ended up with a kiddo who is my complete opposite—very dramatic, outgoing, and perfectly at ease in front of a camera, of course.

K: Is Phoebe based on anyone you know? How did your main character change over time, through revisions?

Lori: See above, but my daughter’s “look at me” personality was just a starting point. With the way parents post their kids’ milestones to social media these days, I got a chuckle daydreaming about a character whose family snaps so many pictures of her, she thinks she might be famous. That’s how Phoebe was born!

Here’s a mini rundown of the FAMOUSLY PHOEBE plot: The center of her family’s attention, only-child Phoebe feels like a celebrity. But after a new co-star arrives (baby sister), Phoebe feels more like an extra. Or worse yet, a person assistant. The baby only drinks from one kind of bottle, only plays with one kind of toy, only sleeps in one kind of way. What a diva! After lots of adventure, drama, and comedy, Phoebe lands a new role—big sister!
hoebe didn’t change too much over the course of revising. While developing her character, I aimed for sweetly misguided rather than overbearing or conceited. Phoebe loves her family as much as they love her. There’s a spread where she “gives back” to her fans.

Did you use any mentor texts or plan out how to re-imagine the typical sibling rivalry/new baby trope?

Lori: I did check-in with some mentor texts while writing PHOEBE. The ones I remember using the most were THE BOSS BABY, KEL GILLIGAN’S DAREDEVIL STUNT SHOW, and THE RETIRED KID. These weren’t books about sibling rivalry but they did compare everyday kid experiences to something else entirely, similar to what I was trying to craft with PHOEBE. For more info, check out my blog post on ReFoReMo (a site devoted entirely to reading for research and the use of mentor texts).

This will be your second published picture book. What did you learn from debut to book two?

Lori: I learned having one published book under your belt doesn’t make it any easier to sell book two! There’s still all the work of writing, revising, seeking feedback, and revising some more. And unfortunately, the rejections are still there, too. Another thing I’ve learned is to be flexible. When I was feeling a little discouraged about the difficulty of selling fiction picture books, I tried my hand at writing a nonfiction PB. And when an editor suggested expanding the text into chapter book format for middle graders, I tried that, as well.

The now 7000+ word manuscript is called ALL IN A DROP. It’s a biography of Antony van Leeuwenhoek, the first person to extensively use a microscope back in the late 1600s. As a cloth merchant, Antony had no advanced education or scientific training. Yet, he was the first to discover microscopic life! Needless to say, it took some time for others to believe him. The story sold to Houghton Mifflin Harcourt in 2016.

K: I love the humor and spare text in PHOEBE. Art and text work so well with this book. PB writers sometimes struggle with art notes. How did you approach notes and being open to the illustrator? 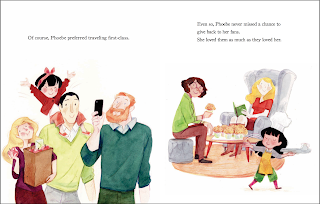 Lori: I did include a handful of art notes. Let’s see… the original text I submitted was 410 words and I included about 70 additional words in art notes. Some of my suggestions made it into the final spreads and a few did not. Here’s an example:

“Being famous meant lots of special attention at the grocery store, the bank, or just plain walking down the street. Of course, Phoebe preferred traveling first-class.” [art: on daddy’s shoulders]

I could have added more art notes (Phoebe gets a free cookie at the grocery store, a sticker at the bank, her picture taken at the park, etc.) but those scenarios seemed self-explanatory so I left well enough alone. With the “traveling first-class,” I envisioned Phoebe riding high on her father’s shoulders, so I added the note. That suggestion made the cut!

My editor at Sterling was kind enough to share the sketches and artwork as they were being discussed and revised. I was able to offer a few more ideas but Aurélie didn’t need much help—she did an amazing job bringing starlet Phoebe to life!

K: Suggestions for pre-published writers/those who are submitting work?

Lori: Keep at it! It took me a year of writing and revising to get my debut picture book, BACKHOE JOE, into shape. Another 3-6 months to query agents. My three sales each received their fair share of rejections during the submission process. My lovely agent, Kathleen Rushall, remains positive and encouraging. She always reminds me, “It only takes one!”

K:What projects are you working on now?

Lori: I’ve been busy promoting FAMOUSLY PHOEBE but I’m also working on a handful of new picture book texts. I have a proposal out to HMH for a second chapter book biography. Fingers crossed for good news there!

K: Let's find out about five of your faves:
A current PB that inspires you
Lori: For an “Aww”: WALK WITH ME by Jairo Buitrago
For a “Ha, ha!”: BROBARIANS by Lindsay Ward
K: A writing craft book
Lori: BIG MAGIC: CREATIVE LIVING BEYOND FEAR by Elizabeth Gilbert
K: Munchie/drink while writing
Lori: Dark chocolate Hersey Kisses & iced tea
K: Motivation technique when you are “stuck” on a story
Lori: Switch gears—start a new PB, catch up on blog posts, offer to critique something for one of your writer buddies, etc.
K: Best revision technique
Lori: Don’t be afraid to chop. You need fewer words than you think!

Lori Alexander is the author of BACKHOE JOE (Harper Children’s), FAMOUSLY PHOEBE (Sterling Children's) and the upcoming ALL IN A DROP, a biography of scientist Antony van Leeuwenhoek (Houghton Mifflin Harcourt). She lives with her husband and two children under the star-filled skies of Tucson, AZ.