Writing from an Osprey's Point of View

Osprey are hawks. Big hawks who thrive on fish. Over the past 18 years, they've been moving onto platforms erected around Cayuga Lake, in the Finger Lakes of New York. When summer comes to an end, they head to parts south.... some flying more than 3,000 miles to winter in Brazil.

A lot of what we know about ospreys comes from researchers like Rob Bierregaard, who has been tagging young ospreys with radiotransmitters and following their migratory paths. One of the cool things he discovered is that young ospreys - at least those on the east coast - tend to make their initial southbound journey over the ocean.

Five years ago Dr. B (as his students call him) was waiting for a young osprey to return to its nest so he could fit it with a backpack radio transmitter. A neighbor, seeing him there, suggested he write a book. So he did.

His book, Belle's Journey, An Osprey Takes Flight, illustrated by Kate Garchinsky was released in May. Divided into 19 short chapters, it tells the story of Belle, hatched into a fine family on Martha's Vineyard.

By the middle of July, Belle and her siblings are nearly as big as their parents, and they're stretching their wings. Dr. B captures the young osprey, secures a backpack radio transmitter harness around her wings, and then follows the signals to map her flights.

Here's the thing about a young osprey's first migratory flight: they don't have maps. Not only that, osprey moms head south when their job is done. Dads hang around until the youngest demonstrates some proficiency in survival skills, then he heads for warmer weather. So young ospreys are heading out on a grand adventure on a wing and a prayer. 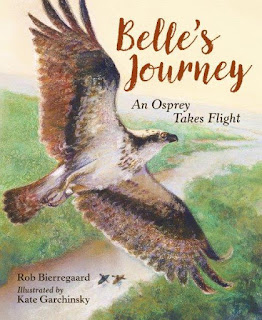 Here's the thing about Belle's Journey: The story is written from Belle's point of view. So I gave Dr. B a call and we chatted about osprey, migration, and the secret life of this book.

Dr. B: After that incident, the neighbor suggesting I write a book, I went home and brainstormed a storyboard. We'd been following Belle - she was one of the young osprey who flew the farthest out over the Atlantic, and went the farthest south. By that time she had two migrations under her wings. But I wanted to include some of the adventures of the other young ospreys, so Belle became a composite character. That way I could more fully show some of the dangers they faced in migrations. Things like hurricanes, or being shot at, or narrowly escaping attack by an eagle.

GROG: Why did you choose to write from Belle's point of view?

Dr. B: I wanted young readers to see the things Belle saw on her journey, and to experience the things she experienced. I want kids to get a feel for flying over a rainforest, to feel the adventure of migration. But I had to be very careful not to anthropomorphize - to make sure Belle didn't express human sentiments. So early on, when she's learning to fly, she makes a clumsy landing and ends up hanging by one foot, upside down. So I wrote, "If she were a human, she probably would have been pretty embarrassed." In alternating scenes, or chapters I write about the scientists using a third-person point of view.

GROG: There are a couple of children who get involved in tracking Belle's journey. Was that based on an experience?

Dr. B: We always had kids who visited us when we were putting the backpack radios on the osprey. None of them worked with us, but several teachers got their classrooms to follow the data that came back from the transmitters. They mapped the migration paths of individual osprey. (you can find interactive maps here)

GROG: Writing a children's book is a lot different from writing an article about your research for a scientific journal. Tell us about your book journey.

Dr. B: It was fun to write! I started writing in August of 2013, and by December I had a first draft - though the entire process took nearly five years. This was my first book and I had no idea what to expect. A friend who knows Kate [Garchinsky] helped us connect at an ornithology meeting. Kate looked at the manuscript and wanted to illustrate the story. She connected me with Harold Underdown who helped put a package together to submit to Charlesbridge. I think we were unusual in that we were an author-and-illustrator combo. Of course there were revisions. In an earlier draft I'd written the scientist chapters in first person, but then switched point of view. They flowed better that way.

GROG: Now that you've got your talons wet in kid's publishing, do you have another book in the works?

Dr. B: Yes, one about Barred owls from the work my graduate students and I did in Charlotte, North Carolina.

Thanks to Dr. Rob Bierregaard for sharing his journey - and Belle's Journey - with us.