Teresa Robeson, The Queen of Physics, and a Swag Giveaway! by Kathy Halsey 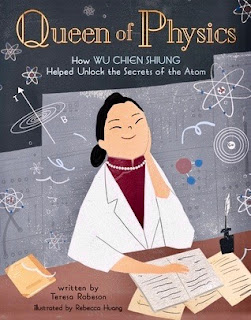 Teresa Robeson has long been drawn to science, writing, and creative pursuits. So kismet, her talent and hard work paid off in her debut picture book, The Queen of Physics: How Wu Chien Shiung Helped Unlock the Secrets of the Atom, illustrated by Rebecca Huang. The book drops October 8, 2019, but you can pre-order here https://www.teresarobeson.com/my-books.html, Meanwhile you can find out more about Teresa and possibly win a cool "Women in STEM" bag if you leave comment on the blog. (My rescue boy Wiley Corgi will pick the winner.)


Book Review
The Queen of Physics has already received a starred review from Booklist and praise from Teresa's We Need Diverse Books mentor, Jane Yolen. "A wonderfully written biography of an important woman scientist hardly known outside her field." Jane goes on to say, "Not just for little girls, but for children of all ages. About achievement, honesty, hard work that follows a passion. Do not miss this one."

As a layperson who doesn't know my neutron from my proton, this book lays out physics concepts in an enjoyable and even lyrical way. For example, she explains beta decay (a seminal part of Wu's life work) like this: ". . . where a neutron inside an atom broke into an opposite nucleon . . . It was like opening one present and getting three different gifts inside." With four pages of back matter, we learn more about Wu Chien Shiung's story as well as science terms used in the biography. Robeson includes tidbits of humor in these definitions, too. ("Positron - the antiparticle of an electron—sort of like the electron's opposite evil twin, except it's not evil.")

This 48-page picture book biography, designated for grades K-2, can easily be used as an introduction to physics to older students, too. Teachers and librarians will appreciate the historical context of Wu Chien Shiung's life over the decades from protests against warlords, then against Chiang Kai Shek, to Madam Wu's struggles in the 20th century gaining acceptance as an Asian woman in the male-dominated world of science. Readers will root for Chien Shiung, the courageous hero, who proved herself in every arena in China, the United States, and the world.

Q & A with Teresa Robeson
K: Queen of Physics and your 2020- release, Bicycles in Beijing, both feature diverse characters or settings. How do your own life experiences work to influence your books and what you write?

T: Being an Asian American who is an immigrant gives me an outsider’s view of this society--I feel like I can see both the forest AND the trees. But, primarily, my culture is the lens through which my experiences are filtered. It permeates pretty much everything I write. My very first published piece was a short story in Ladybug Magazine about my kindergarten graduation in Hong Kong. Since then, nearly everything I write has had a Chinese touch or influence…even the adult works (I have received very good reviews on Amazon for a short story I wrote called Unfillable Void with a Chinese woman as the central character. It was published in an anthology called “Out Of Time” by my sci-fi group, the Minnows Literary Group).

Since I mentioned the Minnows’ anthology, I want to add that every penny earned from the anthology goes to Doctors Without Borders!

K: Tell us a bit about your WNDB mentorship with Jane Yolen. What did you learn that best helped you on your writing journey?

T: The Penguin Posse, my wonderful picture book critique group, convinced me to apply to the We Need Diverse Books mentorship. I didn’t think I would get it so imagine my surprise (and joy) when Miranda Paul called and told me that Jane Yolen picked my manuscript to work with!

Jane, as you know, is the consummate professional. She taught me through example how to put BIC (butt in chair) and focus. She also taught me how to paginate pages to get a sense of the rhythm and pacing for the story, as well as how to take a piece of prose and make it more lyrical. Those are strategies that I am still using.

K: I know you have many interests and talents – illustration, soap-making, and gardening to name a few. How do these pursuits inform your writing?

T: They don’t inform my writing so much as distract me from my writing…LOL! I do sometimes work gardening and my love of nature into stories. Illustrating has also inspired me; I’ve drafted several stories based on drawings I’ve done (though, sadly, none of those stories have sold yet).

K: Your critique group, The Penguin Posse, was recently featured in a Mid-Atlantic  SCBWI publication. What tips do you have for writers on critique groups? How did you find your group?

T: I’m actually in more than one critique group. The Penguin Posse was founded when some of us in 2013’s 12x12 Picture Book Challenge decided to form a group. My in-real-life SCBWI critique group, the Scribblers, was formed in 2011 and encompasses writing from PBs up to NAs. The third one is the Minnows Literary Group, also formed in 2011. That’s my critique group for science fiction and fantasy for older kids to adults.

For anyone thinking about forming or joining a critique group, I highly recommend the book, The Writing & Critique Group Survival Guide: How to Give and Receive Feedback, Self-Edit, and Make Revisions by Becky Levine. It has pretty much everything one needs to know to be a part of a successful group.

I learned critiquing rules from taking classes through Gotham Writer’s Workshop. I want to give a shout-out to Michaela Rossner who taught the SF I and SF II classes I took, which were truly amazing.

The key to having a long-lived critique group is having committed members who are also flexible as the group grows and changes directions. It may sound heartless, but it helps to have firm rules about kicking out members who continually shirk their duties. The group cannot grow intellectually if the members don’t take it seriously.

I'd also like to give a shoutout to these debut groups who have helped me in my journey to publication: The Notable 19, Picture Book Buzz, and the 19 PB Bios (not a debut group but a group for biography PBs.)

K: You write across genres – fiction, nonfiction, from PB to YA.What skills transfer from one type of writing to another?

T: Jane Yolen’s evergreen advice of BIC (butt in chair) is a skill that everyone should learn and that can be used no matter what you write. Another skill I am still trying to master is making my words sing: writing lyrically yet with lightness. That is something that can elevate any piece of writing for any age and genre.

K: What’s up next for you? Book launch, author visits, what else?

T: Oh, my goodness, I have a lot of things going on! Yes, a book launch, some author visits, plus doing a small blog tour, and setting up a pre-order contest. (K: YOU can order now!)

I have to make time for actual writing, too, since I am in the midst of revising a couple of picture book manuscripts. I’m writing a nonfiction MG proposal and a contemporary MG. On top of that, I just started my term as the Illustrator Coordinator for the Indiana chapter of SCBWI. My predecessor, Sharon Vargo, did an incredible job and I want to live up to her legacy.

K: Hey, readers, here's a shot of the cute tote bag that Teresa and Wiley Corgi will give away to one lucky person who comments on this post. The winner can choose a bag with a white handle or a blue handle.

Teresa Robeson, a transplanted West-Coast Canadian lives with  her professor/scientist husband, quirky kids, and even quirkier chickens on a moderate-sized hobby farm in the Midwest, U.S.
Born in Hong Kong in 1964, she was lucky enough to view the first lunar landing and be raised on a healthy dose of Star Trek. This series of fortunate events turned Teresa into a total nerd/geek-girl who loves to write and read science fiction, science, and modern fantasy. She also have a life-long love of children’s lit, having never really grown up. The Queen of Physics: How Wu Chien Shiung Helped Unlock the Secrets of the Atom is her debut picture book.

Teresa's newest picture book, Bicycles in Beijing, illustrated by June Wu, is set to release spring 2020. Connect with Teresa here on her web site, Twitter, and Facebook.
Wiley Corgi and I are ready to ready to read comments and pick a swag winner. 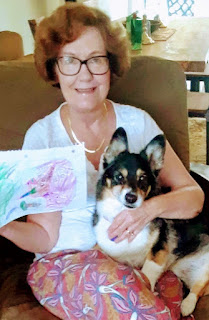