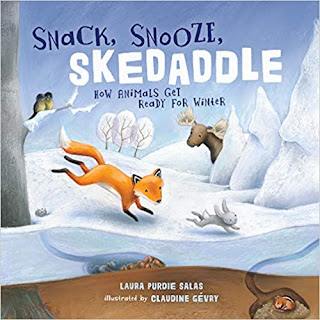 Writing good rhyming text is difficult, and writing nonfiction poses its own challenges, but if you know Laura Purdie Salas's books, you know she has mastered the art of rhyming nonfiction. Her "Can Be" series ( A Leaf Can Be; Water Can Be; A Rock Can Be) uses spare verse to introduce big ideas in nature.

Laura writes poems--and has published several collections--and also pens lovely unrhymed prose. But she has developed a specialty of rhyming nonfiction. Her latest picture book creation is Snack, Snooze, Skedaddle: How Animals Get Ready for Winter. Laura's lively rhyming text and Claudine Gevry's adorable illustrations show young readers three ways in which animals prepare for, and survive, winter: migrate (that's SKEDADDLE); hibernate (SNOOZE), or tolerate (that's SNACK, plus adaptations such as growing heavier coats). It's a layered text, with short factual notes offering additional information for adults and curious kids. And, as a nonfiction nerd, I loved the informative back matter.
Laura graciously dropped by GROG to answer a few questions for our readers. She shares many valuable resources here--just click on the links below.

GROG: Thanks for stopping by, Laura.Your newest book is a real pleasure to read. Can you tell us what inspired you to write about animals weathering the winter?

LPS: Thanks so much for having me here, Christy.
I grew up in Florida, where winter is practically nonexistent, and I was SO excited to move up to Minnesota and get a taste of winter! After our very first snowfall as Minnesotans, though, I looked around at the snowy white cushion all around and started worrying: Where were the squirrels? What did the rabbits do? Did the snow freeze and kill all of them? I was incredibly relieved to learn that snow actually insulates animals in winter and helps many small mammals survive the cold. Whew! My interests in animals and in the four seasons kind of inevitably led to this book.

GROG: I love that your first thought was concern for the critters. It's really interesting to learn how well adapted they are, right? Better than humans! But inquiring minds want to know ... How long did it take you, from the initial idea to the finished book?
LPS: I'll tell you the story. Here’s the original idea in my Picture Book Ideas document:

A few weeks later, I emailed my awesome editor at Lerner, Carol Hinz:

She thought the idea was delightful, and I was off and running (or flying or swimming).
But.
The manuscript did NOT just pour out easily. For several intense months, I tried one different approach after another.
·      Could the animals open fortune cookies that would reveal their winter tactics? “You will go on a long journey,” etc. But I couldn’t get enough variety.
·      Could I highlight numbers? Work in lots of winter survival facts by highlighting one size or speed or something about each animal. Mind-boggling numbers, and also use maps, graphs, and charts, etc. Nope. That was a big fat zero.
·      Could it be a school play or school newscast with students sharing what they did for winter break? It could, but it wasn’t.
I tried a lot of different approaches!
Eventually, I decided to use a before-and-during structure. The left side of the spread shows how an animal prepares for winter (by gaining weight, swimming south, growing a new coat, and so on), and the right side shows what it actually does during winter. So, the hummingbird gains weight so that it can fly south for the winter. The whale swims south so that it can mate and eat lots of krill where it’s warmer. The moose grows a warmer coat so that it can withstand brutal winter temperatures. I liked the idea that some of the winter survival strategies start happening months before winter arrives.
I submitted two different versions of the rhyming manuscript to Carol. (I wouldn’t recommend that unless you have a very good, long-standing relationship with an editor!) I sent those in August of 2017.
In September 2017, Carol took the manuscript to an acquisitions meeting, and it was approved. If only EVERY book moved along this smoothly. But even on a manuscript that moved this quickly, I did a ton of brainstorming and trial-and-error. I considered probably 25-30 different approaches, and I tried out 4 or 5 of them with a first draft—or at least the start of a first draft.
GROG: One thing I most appreciate about you is your generosity in sharing the truth about how this business really works. You've given us a good reminder that even when it looks like someone had a smooth and easy path to publication, writing that little picture book required much more work (and waiting) than most people realize.
Here's a question I've been anxious to ask: How do you decide when a book should rhyme, and when not to rhyme?
LPS: Oooh, that’s a good question. Sometimes I know ahead of time. With A Leaf Can Be…, for instance, I specifically went hunting for a nonfiction topic I could write about in very spare verse.
Other times, though, as with Snack, Snooze,Skedaddle, I didn’t plan to write in rhyme. Most of the approaches I tried were in prose. But once I settled on the before-and-during (or sometimes cause-and-effect) structure of each spread, it seemed to fall into couplets naturally. One line for the before, and then a partner/rhyming line for the during.


I have a picture book coming out next spring called Secrets of the Loon, and this was a project where the editor approached me, which is unusual. I tried four different approaches and wrote the first few spreads sharing the same information in each of all four different styles: haiku, diary, rhyming, and straight prose. Everyone’s favorite (including mine) was the rhyming, so that’s what I went with.
My other picture book coming out next year, Clover Kitty Goes to Kittygarten, is in prose, with just very brief rhyming passages at the huge points of conflict. But it’s mostly prose, and it always needed to be in prose. I wanted to go into more detail and move the plot along quickly, and it would have been very difficult to accomplish that and also still get some emotional resonance in a short rhyming story.
Here’s the thing: I am at least as interested in words as I am in any topic I write about—leaves, water, animals, loons, seasons, etc. So more than half the fun of writing a book is in choosing the structure and words I’ll use. It’s only partially about conveying information or telling a story (for me—other writers might be different). It’s kind of like music. Sometimes I want to listen to haunting folk music, other times power rock, and still other times singer-songwriter stuff. And sometimes I just want a good rhythm I can dance to. The magic of writing each different project is in getting to listen to the words as they start to shape up and then deciding what kind of song they best fit into. Maybe it will rhyme and maybe it won’t. Honestly, it’s trial and error much of the time for me.

GROG: I like the music analogy. And I'm glad to know we have these other books to look forward to!
But meanwhile, would you care to share a tip or two about how to write in rhyme so that editors like it?
LPS: I suppose “Don’t suck” sounds awfully harsh, but it’s what I tell myself when I start revising a rhyming draft. Some things I focus on are:
o   Using fresh and vivid language
o   Not letting the rhyme obviously drive the arc of the story (If a reader knows you wrote a line just because it could rhyme with the previous one, you’re busted.)
o   Perfecting the meter, except when…
o   Breaking the meter purposefully to emphasize a certain point
o   Not getting carried away with too much metaphor and wordplay (This is my biggest hurdle.)

GROG: These are excellent reminders, Laura. Do you have any advice for writers who want to try rhyming nonfiction?
LPS: I shared a great exercise years ago on the Teaching Authors blog, here. It breaks down my general approach to rhyming nonfiction, and I invite you to give it a try.
On my website, I have an area with resources (including ones on poetry and also on nonfiction) for kidlit writers, here.
For folks interested in becoming Patrons (through Patreon), I’ve been sharing step-by-step videos of the process of writing Secrets of the Loon. There’s quite a bit of my joys and struggles with rhyming nonfiction in there!
The book Rhyming Picture Books the Write Way, by Lisa Bullard and me, is full of great, simple to understand (but hard to master, I’m afraid) concepts that will make your rhyming picture book stronger.
And if you are looking for a course to take, I highly recommend Renee LaTulippe’s Lyrical Language Lab. I’ve co-taught it with her twice now, but with me or without me, it’s fabulous! Her materials are terrific, and she is SO knowledgeable about all things metrical!
GROG: Wow! These are some great resources and recommendations. Thanks again, Laura.
One last question, out of writerly curiosity. What does your writing space look like?

LPS: My husband and I moved last year, and for the first time in my life, I have a space that is JUST my office. Not a guest bedroom, not the dining room, not a closet. (Well, it is about the size of a closet.) I use a treadmill desk, and I have a window to see sky and trees…It’s all mine, and I adore it.

GROG: Now we all really have something to aspire to! Good luck in getting this beautiful book out into the wider world, and thanks again for all your words of wisdom.

For more thoughts related to rhyming nonfiction, click below for GROG blogs from the archives:
Making Science Sing
Rhyming Nonfiction PBs
Whose Hands Are These?
Writing Rhyming PBs