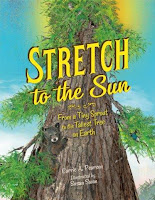 A Book turn is exactly what you think it is: the use of images that require a reader to turn the book as they engage with the story.  If you’ve read Stretch to the Sun: From a Tiny Sprout to the Tallest Tree on Earth (by Carrie A. Pearson; illustrated by Susan Swan) you’ve noticed that as the tree grows it gets taller. To emphasize that, the illustration of the redwood tree requires that you turn the book 90-degrees. What makes this book fun is how readers need to unfold one of the illustrations to capture the height of “the tallest of the tall” in the redwood forest. 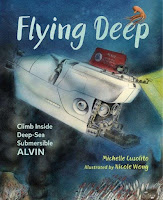 Flying Deep (by Michelle Cusolito; illustrated by Nicole Wong) also uses book turns to great advantage. The book takes readers on an adventure down, down, down into the ocean to investigate a site where underwater volcanoes erupted. To give more depth to this journey, the illustration uses the longest spread – again, a 90-degree turn to capture the extent of this journey into the deep and dark unknown. Then, after checking out the ghost crabs and six-foot tall tube worms, and toggling the controls of the well-named Slurp Gun, it’s time to turn the book and return up, up, up to the surface. 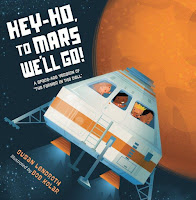 But the book that made me pay attention to the whole idea of turning the book is  Hey-Ho, to Mars We'll Go! A Space-Age Version of "The Farmer in the Dell" (by Susan Lendroth; illustrated by Bob Kolar). The artwork on the title page shows a van driving to a rocket on the launch pad. But flip the page and … you’ve got to turn the book. Because rockets are SO tall that we need a vertical view of the gantry. A couple pages later we’re in space and diving through a hatch. Without gravity, the text slides to a corner and you’ve got to turn the book 45-degrees to read it.
... And keep turning the book as we flip to the next page, and the next until the book is completely upside down for a couple spreads. 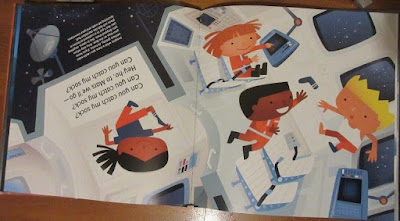 Then a 90 degree clockwise turn and …
whew! … back to “normal”. Like the space voyage it portrays, this book design defies gravity!

It just so happens that all three books were published by Charlesbridge in 2018, so I was thrilled when Diane Earley, art director at Charlesbridge, agreed to a phone chat about book design. She’s responsible for the design department and has four designers working with her. And she designed Flying Deep and Stretch to the Sun.

The designers work closely with editors. “We discuss how we want the art to look,” says Diane. “Should it be serious or stylized? Whimsical or realistic? A lot depends on whether it is fiction or nonfiction.”

Once an illustrator is chosen, Diane gives them the manuscript pages and lets them have at it. “I let them use their creative brains to sketch out what they want on the page.” For Charlesbridge, publishing children’s books is a collaboration. The illustrator should have a say about what’s on the page.

“We’re a team,” says Diane. In some cases she’ll suggest to the illustrator that they do a vertical spread. Other times the author or editor may suggest that. And the design team is always open to art notes and comments from the illustrator, as those generate conversation.

Creating a vertical spread sounds simple: turn the spread 90-degrees. But which way? In Flying Deep the top of that vertical spread is the left hand edge because you can see that you are diving deep into the ocean. But for Stretch to the Sun, she wanted to use the gate-fold to reveal the tree, so that unfolds on the right side.

As for that trip to Mars … illustrator Bob Kolar remembers working with the creative director, Susan Sherman. “We were talking about space, when Susan mentioned that there was no gravity, and suggested we play with that concept.” As he began to lay out the illustration, the idea of turning the book took hold. 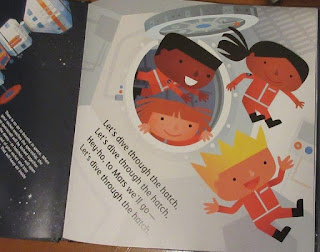 “The lack of gravity is a hard concept for kids to grasp,” Bob said. “Turning the book helps reinforce the idea of no gravity in space.” Bob also loves playing around with end pages. “They are one of my favorite parts of doing a book, so I think about how they could help frame the story.” He does that well with Hey-Ho: the front endpaper shows a view of Mars from Earth; the back shows a view of Earth from Mars. And sandwiched in between is the adventure.

A huge Thank You to Diane Earley and Bob Kolar for answering my questions! You can find out more about Charlesbridge books here and Bob Kolar's books here.

Full disclosure: While I do have a book forthcoming from Charlesbridge, that did not play a role in my decision to blog about these books. The truth is, I fell in love with the interactive nature of Hey-Ho and wanted to share my delight. Review copies provided by the publisher.