Diving into the First Amendment with Chris Mihaly 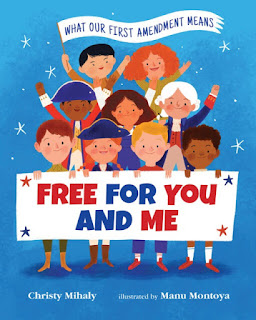 Free For You and Me: What our First Amendment Means
by Christy Mihaly; illus. by Manu Montoya
32 pages; ages 4-8
Albert Whitman, 2020

There are forty-five words to the First Amendment of our United States Constitution. In clear, unambiguous language those 45 words – about the length of an average sidebar in a kid’s nonfiction book – guarantee us the freedom of religion, speech, press, assembly, and petition. And yet…

“Adults are confused about the First Amendment,” says author (and fellow GROGger) Chris Mihaly. “I want to make sure young people understand what it is.” Using a combination of rhyming text and speech bubbles, she developed a contemporary story to show how kids might use the freedoms enumerated in A-1.

The first freedom: religion. “The constitution makes this clear: every faith is welcome here,” Chris writes. So simple a notion, even a child can understand it.

Freedom of speech is a big issue for people of all ages. The First Amendment allows us to speak out, share our point of view, disagree, discuss, argue. It even allows us to criticize our own government. Illustrations in the book depict an event in 1798, when Vermont congressman Matthew Lyon was arrested for criticizing President John Adams. Imagine being tossed in jail for criticizing your town’s mayor, the governor, the President of the United States. The First Amendment prevents that today. And yet, Chris notes, there are some countries where people are arrested for criticizing the government.

Chris addresses each part of the First Amendment, aka A-1, as they are listed in the Constitution, so next up is Freedom of the Press. Her main point: a democracy needs a free press so people can make informed decisions.

“That’s why reporters keep track of events,” she writes. Reporters ask “hard questions to help things make sense.” Parents and teachers tell children that knowledge is power, but how do you gain that knowledge? Chris wanted to depict a modern situation in which readers could recognize the importance of news in their lives, so she shows children discussing a news story that affects them: a potential closing of their playground. 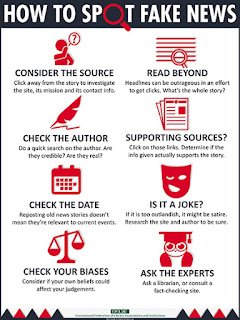 The trick, Chris says, is to help young readers learn to read critically and to assess which media outlets are reliable. So when she visits classes, she talks about how to spot fake news.

Does freedom of the press include lies? I asked. It's complicated, Chris says. The Supreme Court has ruled that intentionally false statements may not be protected, depending on the circumstances. When a newspaper makes an honest mistake, they print a correction of the fact.

Freedom of assembly is specifically listed in A-1. That means people can hold marches and rallies, demonstrations, parades, and protests. “Regardless of your point of view, people have a right to assembly,” Chris says. “And our government should be helping to keep people safe when they are protesting.”

Chris chose to frame her story in rhyme because these freedoms have become complicated issues for people to discuss. And for those who want lots more details, she includes back matter where she explains each part of A-1 in detail. She also includes a timeline of examples when people exercised their First Amendment rights: petitioning for the right to vote (1913), marching for civil rights (1963) and more. There’s also a great bunch of resources for learning more about the Constitution and Bill of Rights.

You can find out more about Chris and her books and articles at her website.