I met Patricia Saunders at a WOW Writing Retreat in the summer of 2014 and then, in 2016, at the third WOW writing retreat, I was in a small critique group when she read a draft of what would be her second book. How cool was that? She was gracious enough to answer some questions for the GROG.

Tell us what you want readers to know about Mother Teresa: The Little Pencil in God's Hand.

I would like to say this isn’t about the Catholic religion nor a religious book. I have dedicated it to all the caregivers in the world. That’s what Agnes grew up learning to do from her mother. As an adult, Mother Teresa continued spending her life caring for the sick, the hungry, and helping those in need.

I think you told me you were self-taught? Have you always enjoyed art? Taken any classes?

I have always been into the arts. As a child, I loved to sing, dance, draw, paint, and make things like paper-dolls. My cousins and I put on plays and charged everyone 10 cents to watch us perform. I did not like to read. I preferred to watch a movie. I did not like school either. In fact, I vowed to never go to school ever again! So, I am a late bloomer and did not start college until I was about 34-ish. I only planned to take one drawing class. Well that lead to many others along with academics. I decided school wasn’t so bad after all and loved it! What I really wanted to do was learn all I could about visual art and I wanted to go to graduate school. But that was going to be a big financial problem. However, the University of Dallas in Irving, Texas gave scholarships. In fact, getting a scholarship was the only way to get into their graduate program. My knees knocked as I handed over my application. Usually there were only about eleven students and took about 2-3 new ones annually. I believe I was supposed to be there. I earned my Master of Arts in Art and was invited to stay for my Master of Fine Arts. Before I became the illustrator for my book, I had taken Mira Reisberg's illustration class. Maybe it was a hidden desire of mine. Nevertheless, I learned how to navigate around without photoshop. I would recommend her class.

How did you decide to write this book about Mother Teresa? What piqued your interest? 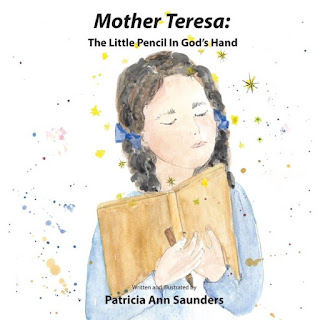 I was raised Catholic, but catechism was a hit-and-miss. My parents divorced and that stuff got put on the back burner. However, I’ve always known who Mother Teresa was. But when I read about her childhood . . .wow! I didn’t know any of it. I found it interesting especially how she spent her time---reading and writing. Now why the surprise? It shouldn’t be because she’s left a legacy of writings. I found her childhood fascinating.

What medium did you use, and why?

Ages ago, I began water coloring. It comes easy to me. The softness seemed to go along with this story. I’ve had some of my flowers reproduced by the New York Graphic Society. That was 1984 and 1986. My last name was different than it is now. I still have the main catalogue showing my first two images, which I will share if anyone wants to see.

As an author-illustrator, I always wonder what came first—the text or the art, or did they come into being side by side?

I am not a trained illustrator and I never dreamt I’d become one. I had the story written and Clear Fork Publishing, Callie Metler-Smith, wanted to publish it. I approached each illustration as a painting. I kept reminding myself how I drew fifteen huge pastels and made the frames for my MA Exhibition and how I sculpted twelve huge sculptures for my MFA Exhibition. I didn’t let anyone down then including myself. My logic said, “If I could do that, I could do this!” Making a book dummy is very important. I found arrangement and illustrations were changed around a little by considering both.

How long from start to finish for the book to be sold? Were you ever discouraged during the process? Do you have an agent? 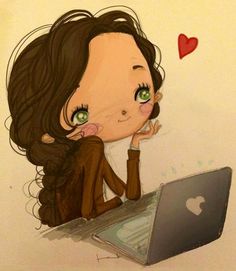 I began the writing and researching in 2015 and sold the book in 2017. Yes, I have been discouraged. I wrote a whole lot of examples to share but I’ve deleted them. Glean what criticism works and forget the rest. You must be thick skinned. Yes, I have had an agent. I seem to be doing better on my own.

Do you have a favorite spread or spreads?

I like them all! But I suppose I really like the one where she’s giving food to the kids. 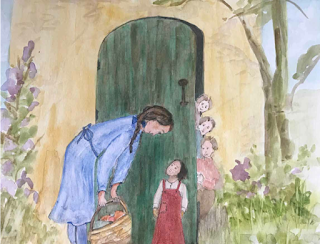 Did you have some trouble spots that you had to iron out?

Yes! Originally in my research, I read Mother Teresa had a club foot. This is in many books, not just one. I wondered which foot it was and wrote to many places including the authors of those books. They didn’t answer. I also wrote to The Sisters of Loretto in Ireland. They didn’t know and suggested I write The Mother Teresa Center in Rome, Italy. It took a month or so to get a response. They wanted to know where and who told me that? In the end, Sr. M. Callisitta said Mother Teresa did not have a club foot and they only consider one book to be 100% accurate. My heart sank. Was my entire book going up in smoke?! It’s an older book and I only found it in the library downtown Dallas. I also bought it on Amazon so I could have it forever. Nevertheless, what I had written checked out! Relief and Hooray! If it had not, then the book would have been untrue---fiction and that would have been a real bummer.

You have extensive back matter. How did you decide what to include?

Initial reading of this book is for the very young. The back matter makes it an interesting read for the older ones. Overall, I wanted my book to tell the whole truth about her childhood. But who can write that many speculated her father was murdered in a picture book? I couldn’t but it’s important to know along with other things. The back matter and timeline add to a student’s research for a class paper. The Catholic schools always teach about the saints and this book gives a lot of information about Mother Teresa.

Any helps or hints for others who want to go the author-illustrator route? Any pitfalls to avoid?

When I first started writing in 2014, the word was to not submit illustrations with a manuscript. I heard publishers wanted to find their own artists. Now it seems like author/illustrators are in demand. So, I’d suggest finding a publisher that wants both in one package. As for myself, I am not planning on illustrating books for others. I’ve got plenty to do with my own stories.

Tell us about any new books in the pipeline.

It’s a Muffuletta! It’s a Whata?
A fun picture book about Senor Salvatore Lupo who wants to open a little shopa and sella delicioso salami, provolone and lotsa stuff. It’s about the origin of the world famous Muffuletta Sandwich in New Orleans, Louisiana. Yummy. It includes a version of the recipe too.
Published by Clear Fork Publishing, Callie Metler-Smith.
Release date: It was scheduled for the end of May 2020. Due to the Covid-19 it is going to be late August 2020.
This spring, Callie Metler-Smith at Clear Fork Publishing, has asked to publish my new series titled: Wesley Rose and . . .
They will be Early Reader Chapter Books. We will have 5-6 for openers. I’ll also be the illustrator.


Can you give us a little bio blurb and contact info for our readers?


As a child, I loved traveling and meeting people from all over the world. When I was growing up, most people did not ride on airplanes or go to many faraway places. In fact, when I was born in Alaska, it was not even a state.I was in 6th grade when I realized the opportunities I had been given. Inside the world history textbook was a photo of the Inca ruins in South America. I clearly remember thinking how I had stood on that ground. From that day on, I appreciated moving ‘almost’ every year and making new friends.
I have always been into drawing and painting. Teaching art to the younger grades allowed me to notice the illustrations in picture books. Now I love adding words to my pictures. Somehow, it has come full circle and I am blessed.