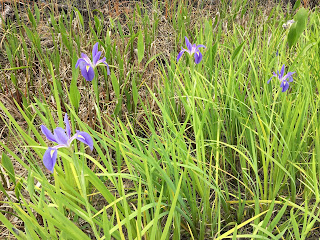 Hi again, weary travelers.
I may be preaching to the choir here, but who doesn't like a smile.
Especially in these stressed & crucial to pay-attention, times.
Fortunately,  this post is a Group Blog visit with biographer
of Rachel Carson, Stephanie Roth Sisson. It's from an earlier
visit at my site, Bookseedstudio. - J.G. Annino

Q You write, “I have long loved Rachel Carson’s writing, especially,
her books about the wonders of nature where she writes so poetically
about science.” How did that long connection to Rachel Carson inform
your proposal to write about her?

Stephanie:
I keep files with potential candidates for possible biographies. There were a few things that came together at that time to make it clear that Rachel Carson should be the subject for my next book. But, although I had read her more poetic books which completely transport the reader to this universe of interconnected lives in the natural world,  I had not yet read Silent Spring. My husband and I had just moved to Mauritius from our uber environmentally conscious bubble on the coast of California. The house we first rented in Mauritius was at the edge of a sugarcane field. So we could see everything that went on in that field from the house. I had never seen so much pesticide use and it shocked and worried me. Even inside the house there were these little thimble sized cups of gecko poison (which we immediately removed) to kill the very geckos that if you left them alone, would eat
the bugs that were also being “treated” for.  We saw pest control making regular rounds in our little neighborhood. So at that point Rachel Carson’s Silent Spring became immediately relevant to my life. Then there was my dear friend, Sharon Lovejoy. She was a cheerleader for choosing Rachel Carson for my next book. Her books, well, you should get them and read them, they are a genuine and heartfelt connection to nature.  And of course the politics around the E.P.A. starting in the first months of 2017 and continuing on now were also an influence. 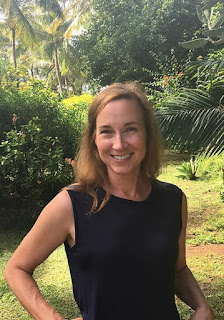 Q How does an author already familiar with a subject discover
new details? And bring a fresh perspective to the story?

Stephanie: What I try to do in the picture book biographies that I write is to not only tell the story of a person’s life, but also to explain about a field that they contributed to. For example, Star Stuff, Carl Sagan and the Mysteries of the Cosmos is also an astronomy lesson, and Spring After Spring, How Rachel Carson Inspired the Environmental Movement is a lesson in ecology.
There is so much information that it isn’t hard to get lost in it. There are so many things to convey, but I try to remember the child who will be “meeting’ this person for the first time and who probably knows nothing about Rachel Carson, the time she grew up in, the things that influenced her and what was important to her and why what she did was important. Also, I put in things that I think that another child could relate to, like Rachel had a dog named “Candy” who was her constant companion growing up. When she was older she always had at least one cat, and so I showed her always with her pets at home- always with that relationship to her fellow creatures.  Then there was the shell that her mother had that you see throughout the book which represents Rachel’s connection to the ocean and that you can see throughout the book. 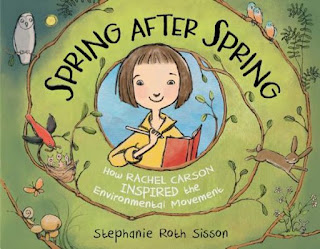 Q What are your processes, tips, organization plan, in
winnowing an extraordinary amount of information on record about
someone who travels from being an unknown child of farm origins,
to testifying before tough inquisitors in Washington, D.C.,
changing U.S. history?

Stephanie: I love researching, as I mentioned before. I do so much that my editor has to say, “stop!” And then I sit there with my piles and look for threads that I can pull through a narrative both in words and images that I can use to illustrate a concept.
Then I try to get a theme down to one sentence, which is SO hard to do because as I research I find so many interesting things out and want to share them all. Every page in the book should harken back to that one theme, sometimes there are sub themes in the images or hinted at elsewhere.
I like showing my subjects as children and what they were like. There is a clear thread going from Rachel’s childhood and the experiences she had as she grew up, becoming aware of threats to the environment and seeing their consequences.
Another parallel to now is that she had to contend with a lot of disinformation and personal attacks to discredit her. So, her coming forward to testify was an amazing act of bravery. The science she had behind her as she spoke and her thorough and clear presentation, including in her book Silent Spring, appearance on the CBS Reports television show and her testimony showed people that she was credible and should be listened to. 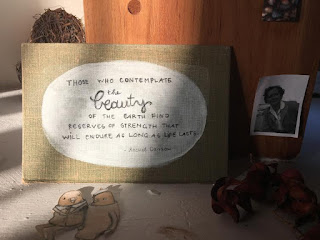 all images copyrighted, used with permission of Stephanie Roth Sisson

Q What sorts of materials relating to Rachel Carson did you find in research?

Stephanie: A constraint I had was not being able to visit the places she grew up in or was associated with because I was living in Mauritius at the time. So I had to rely of print media, film and the internet. Our U.S. home base was still California at the time, so when I could fly home I would fill my suitcases with books I found about Rachel.
Particular materials that I felt gave the most insight into Rachel were her own speeches she delivered that gave a few sentences here and there describing her childhood. There is also a collection of letters between Rachel Carson and her very close friend, Dorothy Freeman where I think you can get a really good sense of what she might have been like. And also another great resource was The Lost Woods: The Discovered Writing of Rachel Carson, edited by Linda Lear.
I read everything I could find on Rachel Carson and then I researched topics related to Rachel Carson. I kept thinking about the title Silent Spring and the iconic first chapter where Rachel paints this picture for us, with a landscape without birdsong. I used the idea of having a lot of creature voices in the beginning and then showing less as we go on could help kids get what was going on. I had also stumbled on an interview with Bernie Krauss, who wrote The Great Animal Orchestra. The book talks about how the sounds in nature represent the health of an ecosystem and that each living thing has its place in the “orchestra.”  You’ll notice that in Spring After Spring that in the first few pages hours are passing and that first we hear birds in the dawn chorus, then insects after their bodies warm up and they are able to produce sound, etc. Then in the next few pages it’s the seasons and then years. I used the idea of the health of an ecosystem being represented by sounds to not just talk about birds, but also the entire web of life as it relates to the over-use of pesticides. 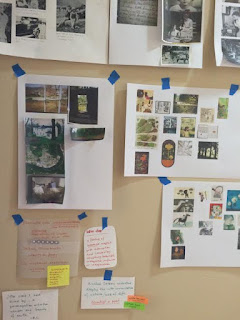 Q  Do you mind sharing how your mother, who you dedicate the book to,
helped create your love of nature?
Stephanie: My mom is amazing. She had always had this connection with children and the kid in her that I benefited from immensely. She always had a garden growing, flowers all around the house …But it was this one moment that I remembered, that made this her book. I was living on an organic farm and environmental education center called “Ocean Song” in Occidental, California when I was maybe 19 or 20. I had packed up all of my possessions and left to live in this place and my parents and sister had come out to visit me (aka check up on me and make sure I hadn’t joined a cult or something). We were all walking through his beautiful forest with towering redwoods, lush mosses and ferns, when my mom launches into this, “I’m very botanical” speech. All of this while she is petting the mosses and is clearly “in” the moment of being swept away with all of this aliveness around her. I love that memory. 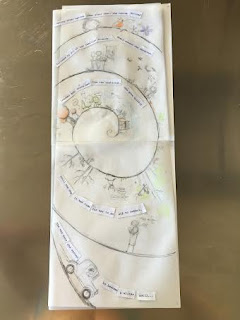 Q With appreciation for your time, incredible great stories & use of these creative images from your studio Stephanie, is there an extra, random or other surprise thought to share?
On a side note, there was a subtlety that I wanted to mention in this biography. When you look out into the world at what people have written about Silent Spring and DDT many articles vilify Rachel Carson saying that she contributed to deaths from malaria because of her cautions about pesticide use. These articles mischaracterize her stance. I wanted to make clear that she never said to not use pesticides ever, she was concerned with the inappropriate use and the overuse of pesticides and herbicides. If you want to see something shocking you can find videos online of people almost bathing in DDT. It was everywhere on everything because no one thought there were any dangers associated with it.
Also, a lot of people don’t notice this, but the front endpapers are little vignettes of Rachel and her mother, but the back endpapers are of Rachel and her adopted son, Roger, her nephew. So while she was doing all of this writing she was also a single mom. 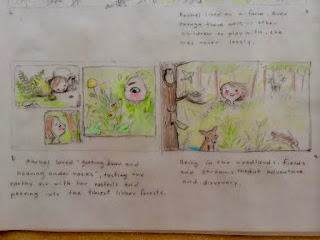 SPRING AFTER SPRING is a multi-textured book, with extra pleasure for
little readers in voicing spelled-out animal sounds captured throughout the story,
and yet, it’s a title equally appealing to older nature-loving students,
who will dwell with nuggets of the fascinating end notes.
Adults who are besotted with the best picture book bios will savor it, too.

Here is the link to what KIRKUS said about Stephanie’s achievement.

Each time I read this book I am struck by how Stephanie folded a
gargantuan amount of information, conclusions and nuances, into a
smooth-flowing entertaining story.
I’m especially delighted with how the book is sprinkled with animal
word bubbles, which children will love
enacting out-loud, as they page through the story.

(p.s. Another Group Blog member is acknowledging comments, for this post’s
writer. Appreciations :)