Years ago, when there was such a thing as in-person conferences, I traveled from Wyoming to Georgia to a lovely state park to participate in WOW, A Week of Writing. I met the other Groggers there as well as many other talented writers, one of whom was Shannon Hitchcock. Shannon recently released her debut picture book biography, Saving Granddaddy's Stories. I caught up with her via email and I'm so happy she let me tell the story of this wonderful book. 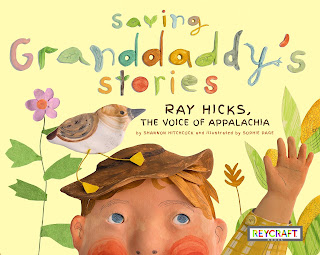 Where did the idea for your book come from? Why was it important for you to write this story?

In 1983, the year I graduated from Appalachian State University, Ray Hicks was named a National Heritage Fellow by the National Endowment for the Arts. I tucked that information away in my mind, and many years later when I was searching for my next writing project, I dreamed about Ray. Ray is famous for telling Jack Tales, and my mother read Jack and the Beanstalk to me many times when I growing up.

How long did you work on the manuscript?

This is a really embarrassing question. I tried writing picture book biographies, (with no success), before I ever tried writing middle grade novels. In 2009, an early draft of this manuscript was nominated for the Sue Alexander Most Promising New Work Award, but never published. The feedback I received was it was too regional.

You usually write MG novels? Why did you want to write a picture book?

Do you have other pb manuscripts in the works?

Yes, I recently signed a contract for two more picture books. Saving Granddaddy’s Stories will be the first book in an Appalachian trilogy. I asked my editor, Wiley Blevins, if he would be interested in looking at a second manuscript of mine about an Appalachian ballad singer. He really liked the manuscript, but thought it should be a trilogy. I didn't have a third book written so I got busy and wrote one. It really was a case of an editor connecting with a story. Wiley is from West Virginia so the mountains and Appalachian culture resonated with him. I also included in my pitch that educators could use Saving Granddaddy's Stories as a tool to  teach figurative language, for analyzing how Jack and the Beanstalk has been retold by different cultures, and for exploring the Appalachian Region and its traditions.

Do you have an agent and who publishes your works?

My agent is Deborah Warren at East/West Literary Agency. My middle grade novels are published by Scholastic Trade and my picture books by Reycraft.

Do you have a favorite page in the book?

Yes, I like the spread with the beanstalk and the cow.

Did the publisher pair you with the illustrator? What do you like about her illustrations?

Reycraft chose Sophie Page to illustrate the entire series. Sophie is a graduate of the Rhode Island School of Design, and the folk art feel of her illustrations pairs perfectly with my figurative language. Sophie crafts her images in two and three dimensions using clay, paper, fabric, and wire. 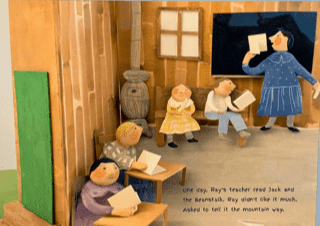 How are you promoting your book during COVID time?

Covid complicates everything, but I’m doing virtual events and blog posts and hoping for the best. I will be participating in an SLJ event tomorrow, but it will be taped and available until December: https://www.slj.com/?event=school-library-journal-day-of-dialog-fall

I also have a middle grade novel, (FLYING OVER WATER) releasing on October 20th and I'm doing a virtual launch through The Writing Barn, but will also give a shoutout to Saving Granddaddy's Stories: https://www.thewritingbarn.com/class/free-book-launch-celebration-shannon-hitchcock-n-h-senzai/
I'm scheduled to appear on Kirby Larson's blog for Friend Friday on January 29th. 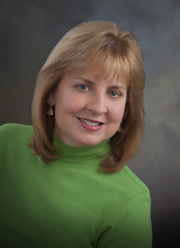 Thanks, Shannon for giving us this wonderful story. I really enjoyed reading it and think it will resonate with lots of children and adults.
Posted by Leslie at Wednesday, October 28, 2020