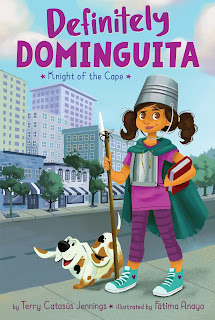 Meet Dominguita Melendez, intrepid knight of the neighborhood, who, along with her squire, Pancho Sanchez, have brave adventures and do good deeds just like Don Quixote in Dom’s favorite book.

Definitely Dominguita is a delightful chapter book series for ages 6-9 released this month by Aladdin/Simon & Schuster. In a starred review, Kirkus called it “a charming adventure that will encourage kids to become knights in their own communities as well.”

In Dominguita, better known as Dom Capote, Cuban-American author Terry Catasús Jennings has created a character who is determined, independent and resourceful, and who just happens to be a child of immigrant parents.

Terry Catasús Jennings knows what it’s like to feel different. Her family, including her father who had been jailed during the Bay of Pigs invasion, emigrated from Cuba in 1961 when she was twelve years old. Terry was immediately enrolled in an American school. The problem was that she only knew enough English to recite the days of the week and months of the year. Like Dominguita, Terry found refuge in books, especially the classics she read with her abuela.

Each book in the Dominguita series is based on a beloved classic: Knight of the Cape on Don Quixote, Captain Dom’s Treasure on Treasure Island, All for One on The Three Musketeers, and Sherlock Dom on—you guessed it—Sherlock Holmes and The Hound of the Baskervilles.

I had the pleasure of chatting with Terry about the series and her writing career.

Tell us a little about your journey as a writer and how it led to this series.

I always dreamed of being an author, but family pressure led me to a more “practical” career. I majored in math and physics and worked in finance for many years before I decided to give writing a chance. At first, I wrote articles and essays. The first essay I ever submitted—about teaching my daughter to drive—was published by The Washington Post. Then I moved on to writing educational content for the Smithsonian Science Education Center and non-fiction books for children. Finally, I decided to try my hand at writing a novel, an upper MG book about a Cuban girl.

Submitting that novel (still unpublished) led me to my agent, Natolie Lakosil. I pitched the idea for the Dominguita books to her in 2018. She was enthusiastic, so I got right to work. The series sold rather quickly. I signed the contract in May of 2019, and the first two books are being released this month, March 2021.

Tell us about the illustrator. 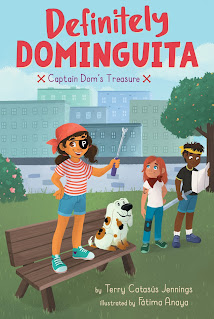 The books are illustrated by Fátima Anaya, who lives in El Salvador. I LOVE the illustrations. Fátima got the characters just right—Dom’s spunky face and the wonderful Roco, the dog whose belly is so low it almost touches the ground and whose ears are so long that they do. The costumes are so creative—and the colors she uses are wonderfully vivid. Her work is just terrific.

In the first book, Knight of the Cape, Dominguita is reading Don Quixote to stay close to her Abuela who’s had to move to Florida because she’s getting forgetful. When the class bully says Dominguita reads because she doesn’t have any friends, she has to come up with a better idea: she’s studying to be knight. He laughs. “Girls can’t be knights.” Dominguita decides to prove him wrong. She adopts the name Dom Capote, Knight of the Cape.

Both Don Quixote and Dom Capote failed spectacularly! But both eventually transition from fantasy to reality. They come to understand and accept themselves as they are, including their shortcomings and failures. They both recognize the value of love and friendship.

Having based the characters on those in Don Quixote, how does that work in the rest of the series, where the books are based on other classics?

In each book, the character relationships stay the same. Dom is the visionary, Pancho brings her down to reality, and their friend Steph is the even keel rule-follower. The events and key scenes echo the classics but the novels are each a contemporary story. For example, in Captain Dom’s Treasure, Dom finds an old map in a library book with a telltale X marking an unknown place. She and her crew set off to find treasure like Jim Hawkins did in Treasure Island. 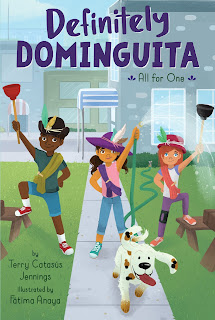 These books are filled with the kind of humor that kids love. Give us an example.

In All for One, inspired by The Three Musketeers, Dom and her friends set out to foil a villain’s dastardly intention to spoil their friend Leni’s quincerañera party. They use the ultimate musketeer weapons—chocolate covered toilet plungers.

I sure did. I belong to two critique groups, and at one point, I was writing too fast to be able to wait for the meetings. So one group critiqued the second book, and the other did the third. They were a big help!

What do you find most rewarding about writing children’s books?

The reward is connecting with a reader and making a difference. My hope is to reach children and cement the belief that there are no “others.” Dominguita is every child. Whether she is American, Cuban or the descendant of a purple popsicle, she loves and misses her grandmother, tries to manipulate her brother, sometimes disobeys her parents, loves sweets. She has moments of brilliance and moments of sheer folly. She is just a kid who happens to live in a household where black beans and rice with a side of plantains are a staple.

Thanks, Terry, for sharing your journey with us. We wish you every success with Definitely Dominguita.