What is "Showing not Telling"

When the GROG had its first anniversary, we queried readers and asked what topics they’d like to see featured in the blog. We got many great responses and will be working through the list as the year progresses.

Today I’m covering some information about that perennial writers’ nemesis, Showing not Telling.

So what is Showing not Telling? Often writers hear from critique partners or agent/editors, “Show me, don’t tell me!”  What exactly does that mean? Let me show you.

I recently checked out E.B. White’s Trumpet of the Swan from our local library. Here are some ways E. B. White shows us information instead of telling us.

Instead of telling the reader, “Sam was happy,” E. B. White says,

“His heart thumped from excitement and joy.”

Which sentence is more interesting? Which sentence better transports the reader into Sam’s life? That’s what ‘showing’ does. It gives the reader a richer experience, one with depth and substance that draws them into the story and keeps them there.

Here are more examples. The author could have said, “The swans trumpeted loudly.”

Instead he paints us a picture,

“Every wild creature within a mile and a half of the pond heard the trumpeting of the swans.” 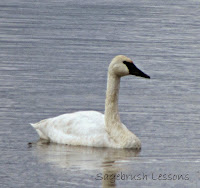 When the female begins building her nest, E. B. White penned,

“The female reached for grasses, for moss, for twigs – anything that was handy. Slowly, carefully she built up the nest until she was sitting on a big grassy mound.”

I also reached for another classic, Laura Ingalls Wilder’s Little House on the Prairie. In Chapter 16, Fire in the Chimney, the author never once tells us it’s autumn. Instead she uses words to give us clues and pictures for our minds, 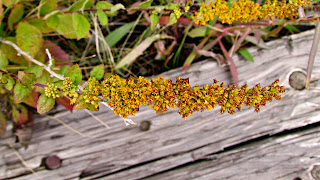 “The prairie had changed. Now it was a dark yellow, almost brown, and red streaks of sumac lay across it.”

“The wind was cooler now, and all along the creek bottoms flocks of wild ducks were rising, flying and settling again.”

“The tree-tops along the creek were colored now. Oaks were reds and yellows and browns and
greens. Cottonwoods and sycamores and walnuts were sunshiny yellow.”

What a lovely way to inform the reader of the change of the seasons.

I know. All you picture book authors out there are thinking, “That’s all well and good for middle-grade books. But words are high-priced real estate in the realm of picture books. Wouldn’t it be better to be succinct and just tell the reader what’s happening?

Not necessarily. Granted, you can’t wax quite as lyrical with picture books, but you can still provide the same depth by showing the reader what’s going on. 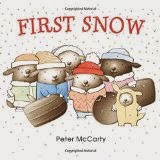 Peter McCarthy’s latest book, First Snow does just that. Instead of writing, “The children were excited to go outside and play in the snow,” Peter writes,

The excitement coupled with his incredibly beguiling drawings of the animal children made me want to go with them. Then when Pedro falls off his sled, we are treated to this description,

“Over a bump and into the air, Pedro flew! Thump! Bump! Fump! he went, into the snowbank at the bottom of the hill.

I probably would have written, “Pedro sailed off his sled and landed in the snowbank.” Fewer words yes, but less life as well.

Here are some practice sentences for you to change from telling to showing. How will you transform these boring sentences into something the reader actually wants to read? Post your ideas in the comments so we can applaud your efforts. Also, search the Web for classroom lessons on Showing not Telling. If it works to make kids better writers, it'll work for you.

Think about how you can bring these sentences to life using words that beckon to the reader and draw them into the story, living and breathing the plot, the characters, the surroundings. Play with the words in your stories. Weave those strands into a richness that makes your reader want to experience the story again and again and again.