First People/American Indians/Native Americans
In October/November + All Year Round
by J.G. Annino

SCBWI co-founder Lin Oliver is known for saying that

writers of picture books should read, digest & understand (not skim)

at least 100 picture books before attempting to write one. If they aspire to

publish a mighty fine p.b. of their own.

Here are resources so that illustrators & writers, for children, can glean

writing for children may also enjoy time spent with the resources, too.

Seeking out new titles, or, titles new to you, although written by Native

Americans decades back, helps counter books that don’t stand up to critical scrutiny.

Websites on the topic, operated by Tribe museums or Tribe governments are also

resources for titles & other information.

that a book for children could emerge in better shape as a collaborative effort,

or at least with review during the process, by a Tribe member/Tribe staff who have

How to Find Titles

AMERICAN INDIANS IN CHILDREN’S LITERATURE –Dr. Debbie Reese who
created & administers this encyclopedic site, is an enrolled Nambe Pueblo Tribe member & an expert on children’s literature. On the right hand side of the AICL resource, find articles & pages, such as books by grade & how to evaluate a book on a Native American topic. Also note her tabs at the top, where there is also a world of illumination such as, “We are not people of color.” If time is really limited, that one article can be a game-changer.
http://americanindiansinchildrensliterature.blogspot.com/

Below is a book I’m currently enjoying.
Memoirs, written by Native Americans/First Peoples, help us understand the benefit for
the eventual child readers, if non-natives, or those without deep Tribe connections, such as years
teaching American Indian students, collaborate with Tribe members, in crafting books for children. 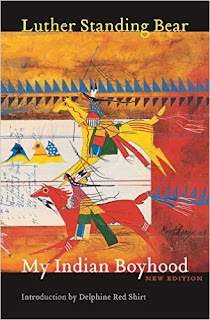 “The first white men to come to this country thought they had discovered
India, a land they had been searching for, so they named the people they
found here Indians. Through the mistake of these first white settlers, we have
been called Indians ever since.” c. Chief Luther Standing Bear

Topics covered include - food traditions, riding his dear pony in a way nearly invisible
to anyone by clinging to the side, only one leg slung over the animal’s back at full speed
from age six, survival skills for a child alone on the Plains, high standards of cleanliness,
using plants for perfumes & much more is covered in an eloquent way.

If you are wondering about the timing of this post, it appears
on Monday, Oct. 12, 2015 the famous Columbus Day in the great U.S.A.
It is also published early enough that if you seek titles to read in school
or share with young people at Thanksgiving, you can use these resources.

It’s awkward for our profession to know that some well-intentioned
Thanksgiving holiday books have sections that may not stand up to solid
critique, applied by American Indians in Children’s Literature, Oyate & similar
expert sites.

Once I answered a challenge about these ideas from a fine person, a children’s
writer appearing at the same time I was at a big city book festival. The writer thought to
change (“retell,” in the writer’s word) a Native American teaching that this writer termed
a legend. It was a sacred teaching received by young Tribe members from Elders; not
something to change. It was not thought of that way by the writer, who seemed frustrated
that a Tribe member might not be thrilled with any attention given to the Tribe by a traditionally published children’s author.  My understanding was that an editor had already turned down the project, citing similar reasons. I said,  “We don’t know, what we don’t know.”

Also, American Indians in Children's Literature has several articles about
Thanksgiving books for schools and children.
There are at least 500 recognized Tribes in North America. Their
traditions, history & status is complex & fascinating to study. I am only
beginning to learn.

So, Why I Am Writing This?

One of our group members thoughtfully suggested the topic.

I waved my hand. In a long literary odyssey, I worked with a Tribe
member/family members & that person’s Tribe museum, (affiliated with the Smithsonian)
to bring an eye-opening p. b. biography to children in 2010. It is in print & used
in many classrooms and libraries. Although it received good national & state
recognition, the honor that I held my breath to receive, is that it is sold in the
Tribe’s museum bookstore & was promoted to their membership.  The family
sent me a kind note after publication.

I appreciate you for being interested in the American Indian/Native American/
First Peoples topic.  Happy Columbus Day!