For a decade, Joanne Fritz cuddled at home
with the best children's books in the form of
advance reader copies (ARCs), before the
real deal ever popped into reader hands.

And she met the best children's authors in the
bookstore where she hand-sold their books.

She also read the best children's magazines,
such as those from the Highlights family of
publications.

Now, she is refining her writing for children, with
help from the best author-teachers we love to
read & study. 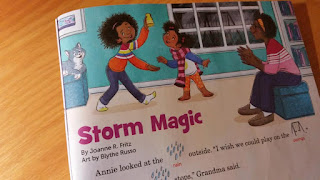 What were the best things about being a children’s bookseller?
Besides meeting all those amazing authors, I loved finding the right book for a child.

If the parent told me a few things about their kid and what they liked to read (or didn’t like to read!),
I could always make several suggestions for books they would love. Parents and grandparents,
as well as librarians, learned to look for my Staff Pick shelves or seek me out to ask for further recommendations.
By the time I left I had quite a few loyal customers who only wanted to deal with me, especially at the holidays.
Another favorite part of my job was recommending books for Indiebound. They used my blurb for
Padma Venkatraman’s first novel (back when Indiebound was still called Booksense), hence it was
fantastic to finally meet her at the Highlights Foundation workshop on Novels in Verse in 2016.
I also wrote children’s book reviews for a local newspaper that was distributed to all the area schools.
Now I review books on my blog, My Brain on Books.
What were 5-8 titles, off the top of your head, that were guaranteed sellers in
picture books, middle grade & YA?

It’s been a few years, so this may already seem outdated, but in PBs, Olivia was always popular,
and any funny books about animals, really. The Pigeon books, Richard Scarry books, etc.
Anything about trucks sold well, like Goodnight, Goodnight, Construction Site.
We also sold a lot of classics like Goodnight Moon and Where the Wild Things Are, and
Caldecott winners too because they made nice gifts.

In MG, after Harry Potter died down, we sold anything by Rick Riordan and really anything in a series,
but we also had plenty of customers buying stand-alone Newbery books and whatever our current
Staff Picks were. And in YA, Hunger Games, Twilight, and similar books sold well back then, but so
did YA contemporary, like anything by Sarah Dessen or Ellen Hopkins. Now, I think contemporary rules,
but there will always be fans of fantasy and paranormal.

What are your favorite kinds of children's books? What did you read as a kid?

As a kid, I absolutely loved The Secret Garden, James and the Giant Peach, and Charlotte’s Web.
But I would read anything then, even comic books.
Reading was by far my favorite thing to do, besides climbing trees.
My favorite books remain MG, though now I lean more toward historical fiction and contemporary
than fantasy, but I do try to read adult fiction occasionally (my favorite read in 2015 was
All The Light We Cannot See).
In general, I’m not big on nonfiction (I know I should read more).
Just give me a good story and I’m happy.

Did you write as a kid?

Yes, I did, starting at about the age of eight.
But for a long time I thought of it as a secret I needed to keep.
I didn’t tell my family or friends.
For many years after, I wrote secret stories and poems but never tried to write
a picture book until the birth of my first son.
I also didn’t write on a regular basis back then, only when I felt inspired.
I didn’t start writing novels until 2007, so I’m relatively new at that. 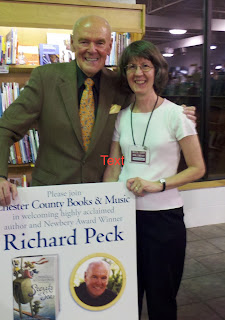 How did the shop prepare for author appearances?

It was a team effort.
The manager took care of ordering books for the signing, basing it on how many
people we expected to attend. We advertised in the local paper, and more recently, online.
The day of the signing, we’d set up chairs, a podium, and test the microphone a few hours in advance.

For the children’s authors, I frequently introduced the author myself.
The first time I had to do that I was extremely nervous, but everyone told me I did a great job.
From then on it was fairly easy. I still got nervous and weak-kneed, getting up in front of 50 or
100 people and talking into the microphone, but I managed.
I also moderated Q&A sessions after the author’s speech, and helped keep the signing
line moving along smoothly. After a signing, we usually asked the authors to sign stock for our shelves,
so I got extra chances to talk to them.
Over the years, I was privileged enough to meet many distinguished children’s book authors,
including but not limited to, Laurie Halse Anderson, Patricia MacLachlan, Richard Peck,
T.A. Barron, Dan Gutman, Jerry Spinelli, Ellen Hopkins, Beth Kephart, A.S. King, and
K.M. Walton (whose launch party for CRACKED was by far the biggest of any we had for a YA debut author.)

You undoubtedly have a deserved advantage in becoming a children's writer & author, due
to your bookshop background. Perhaps it's from seeing so many titles.
Perhaps from meeting children's authors in the shop? And from hearing what young
readers in the shop, said?

There were many advantages to working in a large children’s book department.
Probably the biggest advantage was having access to so many ARCs.
Since I was able to read (for free) as many current books as I could, I learned a lot about
writing from that
(and I think any aspiring author should read as much as possible in their genre – if you don’t
have access to ARCs, go to your local library!)
Restocking shelves helped me learn what books were flying off the shelves and what weren’t,
so I learned what books were successful, at least in our area. I’m sure every bookstore is different.

As a bookseller, I devised a pitch for each book.
So when my customers asked for a recommendation I could pull out a few books and
describe each one in an enticing way.
It’s a bit like hooking an agent or editor with the first few lines of your query.

Meeting authors is always wonderful, and some of them I’m proud to call friends now,
but it really didn’t give me any advantages as a writer. Talking to my young customers h
elped me realize what they look for in a book (as opposed to what their parents look for).
My customers were diverse and their tastes varied widely.
What one young reader liked, another wouldn’t.
But they all knew a good cover can make a potential reader pick up a book, but if the first page
doesn’t deliver, they’ll put it down again.

Before you leave a note/comment for Joanne here, read some more about her:

A lifelong avid reader, Joanne majored in English at Dickinson College, intending to work in publishing.
She spent a couple of years as an editorial assistant in New York City, before moving back to Pennsylvania
and working first in a greeting card company and then in a school library.
After a stint as a stay-at-home mom, Joanne re-entered the work force as a children’s bookseller in 2002 at Chester County Book & Music Company, in West Chester, PA. At one time, it was one of the largest independent bookstores in the country. It opened in 1982. The bookstore no longer exists, unfortunately, but there are still several indie bookstores within a reasonable driving distance of Joanne's home.  When the bookstore closed, she began writing full time.

You can meet up with her at MY BRAIN ON BOOKS, her book review blog.

"Storm Magic," (above) a rebus by Joanne R. Fritz, was published in the October 2016 issue of Highlights.