My last two posts until summer break will uncover new ways for picture book writers to see craft/story by focusing on complimentary arts – storytelling and illustration. Storyteller/author Lindsay Bonilla uses writing to feed her storytelling craft and the art of performance to enhance her writing. 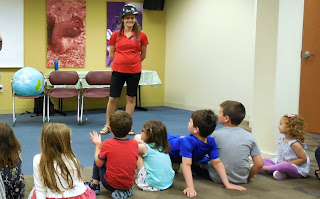 I accompanied Lindsay to a recent library story hour where she shared tales for this summer's theme, Peace Builders. I observed, took notes, and watched the engagement levels of adults and children as she woven her magic tales.

Good Storyteller and Writers...
1. Set the stage immediately. Believe in the world you create for the reader, and they'll follow along.  Lindsay greeted children as they entered the room. She gave them imaginary hard hats and even extended the imaginary world. One child asked about her glasses, and Lindsay said, "What? You want safety google, too?"
2. Engage the audience with questions, action, refrains. With a sea tale, Lindsay instructed kids to show the motion of the ocean, and act out the story as she became the guide on the side. What props can we use to entice kids to interact with the characters/plot?
3. Be cognizant of children's differences. A young boy who had trouble settling/attending to the story became a participant who moved the pace along. As writers, we must never lose sight of our readers' entry point with the material.
4. Our roots as writers are from the oral tradition. Read a craft book on storytelling, attend a storytelling circle, or take a class. As Judy Sierra and Robert Kaminski say, "Nothing has ever equaled for us the intensity and excitement generated by a good tale, well told."(TWICE UPON A TIME.) 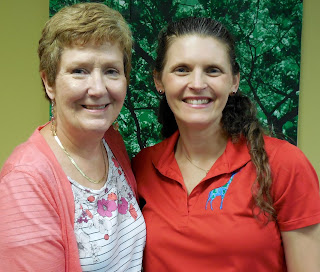 
K: How did you first become interested in storytelling?
L: I like to say that I sort of stumbled upon storytelling. I was a theatre and religion major at Northwestern University. During my senior year, I signed up for a storytelling class that was offered by the theatre department because I I loved the professor, Rives Collins, and would have taken anything he offered. The class was magical. Each student had to share multiple types of stories. It was amazing to see how quickly the sharing of our stories created a bond amongst us, not only as we shared, but as we LISTENED!
K: What led to your interest in cultural stories?
L: For one of my class projects, we created a bibliography of stories that we could tell. At the library, I poured over tons of story anthologies  but the ones that captivated me the most were folktales. I love travel and learning about other cultures. I loved the way these stories could transport us to different places and that the wisdom in these stories seemed simple yet had incredible depth. I fell for folktales and knew I wanted to have a company dedicated to sharing them with children.
K: Take us through your career path.
L: After graduating from Northwestern, I spent two years doing children's theatre in my hometown. Then I made a big move  to Madrid, Spain. I took a month-long course to become an ESL teacher, but at the same time I was looking for theatre work. I found a company called Interacting that presented English-language theatre programs for Spanish-speaking audiences.  With them, I toured Spain and Portugal doing interactive programs to teach English. Although we performed in two-person teams, occasionally I would do solo performances.
They also had me writing/developing new programs. I loved their interactive approach and the way it  engaged the audience. After a bout a year, I knew that I had all of the tools I needed to start my own company dedicated to sharing other cultures through their folktales. I moved back to the states. It was a slow process, but my husband (who I met in Spain!) would not let me give up. He actually forced me to turn down paying work at a time when we could have used some stability because he believed in what I was I doing. My company, World of Difference Ltd., would never exist if it weren't for him. 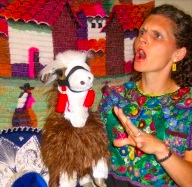 K: For you, how do the worlds of storytelling and writing intersect?
L:   This is a great question! I think that storytelling and writing are two sides of the same coin. You can't really separate them. Here's how I see the intersection in my work. Storytellers are not like actors in that we don't memorize our stories. We are taught to visualize a story – to see it playing out in front of us and then to describe it. (Like authors, many storytellers use storyboarding as a tool for learning their stories.)
This definitely informs the way that I approach writing. I tend to visualize my own stories. I see my characters and the world that they inhabit. I hear their voices. During my current phase of life, where I'm at home with a 3 year old and an almost 4 month old, it's rare that I have time to write. So being able to visualize the story comes in very handy. Sometimes I'll also start to tell the bare bones of a new story aloud or act it out with my son. It's amazing what you can discover when you take a different, more playful, approach!
K: What’s up for you next Lindsay?
L: I'm in the middle of my Summer Reading Program tour right now. That will keep me busy over the next few months, visiting libraries across Ohio and even one in New York state! After that wraps up, I begin work on a program featuring folktales about turkeys  for Thanksgiving.

As for writing, I'm currently working on a picture book that I'm really excited about. I've approached it in three different ways (meta-fiction, traditional 3rd person, and as told by the main character). I'm not sure which one I'll ultimately land on, but I do know that trying it in so many different ways has helped me make discoveries I never would've even considered if I'd only stuck with my first version.
Also, I'm hoping I'll be able to share some exciting writing news very soon! So stay tuned! (K: I know her news and it's very good!)