What's New at the Library?

We order new books every month at our public library and since I'm in the cataloging department, I get to see all the new titles as they come in. Here are a few picture books that have hit the shelves recently. This is a mixed bag of stories - hopefully there's something in here for everyone. 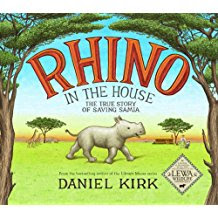 Rhino in the House - Daniel Kirk (author of the Library Mouse series)
Because I can't pass up a great animal story, this was the first book I picked up in our children's library. It's a true story with a great ending so it's a win-win for me. In his author notes, Daniel Kirk explains he wrote the story because he found a photo of a woman, Anna Merz, sitting next to a black rhinoceros, Samia. In his research, he discovered that Anna founded a rhino sanctuary in Nairobi, Kenya to protect the animals from poachers. Samia was a calf born on the sanctuary, but wasn't being cared for by her mother.  Anna took the baby to her house and successfully raised her.

First off, what a great story! As a child, I asked my parents for all sorts of animals (we did have dogs, so I wasn't totally pet-deprived) including a giraffe, penguins (thanks to Mr. Popper's Penguins) and a baby musk ox. A baby rhino would have been right up my alley. I loved that Anna Merz brought tiny (a relative term when speaking of rhino's) Samia to her home and even snuggled with her in bed - this is my kind of woman.

Daniel Kirk did a wonderful job with the illustrations - Anna looks like a nice, loving grandmotherly-type and Samia is adorable. He brings in other African wildlife and gives readers an understanding of what Samia's native habitat looks like. I also love that he included pictures that illustrate Samia's communication with Anna - "Hoo hoo hoo" means "I'm coming!" followed by a picture of a charging baby rhino.

This is a wonderful book for children who love animals. It beautifully illustrates a true conservation idea along with the work of a woman who was determined to see it happen. Rhino in the House is a great starting place to introduce the idea of "passion" to children and how we can all find something we're passionate about. 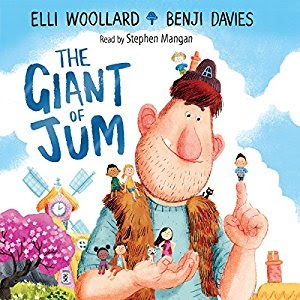 The Giant of Jum - Elli Woollard; Illustrated by Benji Davis
This fun book is a take off on Jack and the Beanstalk. If you have a child that knows the refrain, "Fee, fi, fo, fum ..." this will be a rollicking read. The Giant of Jum is a rhyming picture book about a grumpy old grouch of a giant who pines to eat a child on a dish. He stomps off in search of a child, especially the boy Jack which his brother told him about. The children out-smart the giant by convincing him he really is quite nice and he couldn't possibly eat Jack or any other child. Instead, what giants prefer is . . . cake.

The illustrations are perfectly child-friendly and give an adorable sense of size and proportion. Everyone is excited when the giant cake appears, because seriously, who isn't excited by cake? The rhyme is fun to read and the rhythm accentuates the story. This is a great read-aloud because you can use lots of different voices, especially your grouchy giant voice. 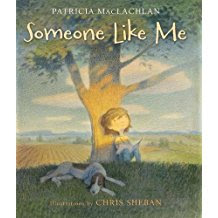 Someone Like Me - Patricia McLachlan; Illustrated by Chris Sheban
The soft edges and subtle colors of the illustrations in this picture book enhance the dreamy quality of the story of a young girl who is a gatherer of stories. When she's not reading, she's listening to people telling stories and trying to teach her dog and chicken to talk. She climbs into trees to watch the sky and like her great-grandmother loves the dark prairie earth. When she grows up she might be someone like the author - a writer.

I really enjoyed this book. The illustrator gave the girl's face a pensive expression - she's thinking deep thoughts about everything, something writers are known to do. There's an ethereal feel to the book, giving weight and importance to words and books and stories without coming out and telling us they're important. Children wonder deeply about their worlds and here's a book that says it's ok to do so. 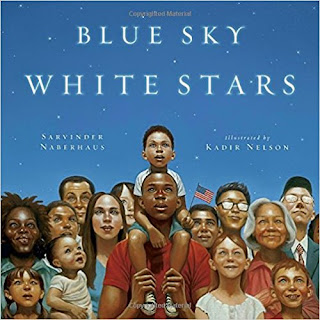 Blue Sky, White Stars - Sarvinder Naberhaus; Illustrated by Kadir Nelson
I saved the best for last. This book will find a home in the hearts of everyone. Using only 68 words (most of them the same on each spread), this book defines America and what it means to be an American. The author takes the symbols on the United States' flag - its red rows, blue sky and white stars - and uses those same words to describe America.

This is a stunningly beautiful book in both words and illustrations. It's a tear-inducing read and kids will wonder why you're all choked up by the end of the story. It's guaranteed to stoke patriotism even in the heart of complete cynics. This is the perfect book to read on holidays like Independence Day, Veteran's Day, Memorial Day, Martin Luther King Day, and President's Day.

Blue Sky, White Stars showcases history, the beauty of the land, immigration, and civil rights, as well as the concepts of achievement and freedom. If you're looking for a picture book to give children a crash course in Civics, this is it. It would also be a helpful reminder for most adults. This book deservedly received four, starred reviews and I hope it continues to win favor and acclaim.