FLASHLIGHT NIGHT: Rhyming picture book to take out to the tree house

Suppose that I want to write a friendship
picture book adventure.
It will come alive through three important elements.

Let's say these are -

And to up the stakes for me as a writer,
let's say I'll pull it off in rhyme.
Beautiful rhyme. Not just rhyme for when you play word games at home.
You know what I mean. The beautiful quality of
the low percent of submitted rhymed manuscripts that can become traditionally published
Hmmm.

I hope you'll sit down soon with the rhyming picture book, FLASHLIGHT NIGHT.
The text is by debut picture book author Matt Forrest Essenwine
& the art is from the well-known award-winning creator, Fred Koehler. 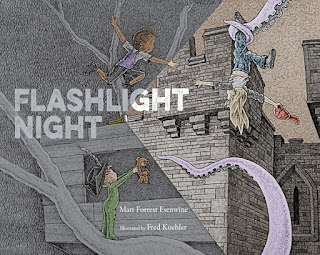 This is a poem story alive with the promise


of high adventure unfolding
in the sedate backyard tree house. The friends
flash the light to discover that it:

The illustrations by Fred Koehler are like a nocturne gallery.
The nightshade from scene to scene heightens the child’s delight in overlooked
but important clues. I went back to look at them up close, as soon as
I read this book about the adventures & friendship of a girl and two boys.

To celebrate publication, the two creators agreed to tell me something about their childhoods.

“Hi, thank you for doing a post, Jan! I really appreciate that.”

(The book deserves a lot of spotlight, Matt.- jga)

“Growing up in rural New Hampshire, I developed an appreciation for nature from a young age.
We lived on 10 acres of mostly wooded property, and although I was not allowed to go
deep into the woods, the woods were all around me and therefore afforded me a great
opportunity to use my imagination.

"I never had a tree house as a child, but I did have something I called my “hideout,”
which was an area just off of our lawn that consisted of lots of large, flat stones, thick juniper bushes,
and a couple of large, easily-climbed trees. Some days I would pretend I was a bad guy
hiding from the law, while other days I was the good guy trying to track down the baddies.
My hideout was also my “secret” place to have lunch. Mom would give me my food
and I would head out to one of the flat rocks there and eat underneath the tree.
And even though this little area was right along the edge of the lawn and only
15 feet or so away from the road, I felt like I was in my own little world!

"I suppose it is no wonder, then, that the natural world and my sense of family have
played such crucial roles in my writing, both for adults as well as for children.
I am fortunate that dad has not sold the place yet – at 82, he still lives on that same
old dirt road surrounded by woods – but I know that a not-so-little piece of me
will be lost the day he does.”

(This paints an evocative picture, Matt. And so great about your Dad. – jga)

I first encountered Matt’s work via the Poetry Friday crowd.
I anticipate Matt’s poems & stories to appear in many forthcoming picture  books. In fact,
his second picture book, which he co-authors, is due out in April.
Go visit him here.

“When I was a kid, our house backed up to an acre or two of Florida scrub.
Through the woods, I had neighbors whose dad worked construction and
brought home all the scraps of job site lumber. In those trees, we would build
the most elaborate fort systems, with tight ropes lines between the trees, trap doors,
and even underground bunkers. We had more fun than any other kids on the planet,
and probably could fend off pirates better than the Swiss Family Robinson.”

(I see the foundations of an artist’s mind in those constructions, Fred.
Thank you! – jga)

Also, travel along as KidLitTV reveals, via a talk with Rocco Staino,
how Fred helped develop this book’s evocative nightscape.

I ordered FLASHLIGHT NIGHT from my local indy, Midtown Reader.

My child days hideout memories include a tree seat my father nailed into one of our beautiful,
old dogwood trees, so I could read up there, undisturbed & also, the creek ravine woods that
beckoned me not far from that tree. Earlier, at our first house, I loved the fresh-scented,
old pine fairy woods. It rose up dark green on damp dirt on the side of our house that was
opposite from the neighbor's aromatic dairy farm.

Readers of the Group Blog: good luck with all your rhymes, especially the picture book kind. - JG Annino