Annette Pimentel on Scaffolding the Past for Young Readers


by Sue Heavenrich, with Annette Pimentel

Last fall I reviewed Annette Pimentel's book, Mountain Chef, a wild tale of a cook in the Sierra mountains. I loved the story and the extensive back matter, and was amazed at how Annette did her magic. She graciously accepted our invitation to write a guest post for the GROG. And now I'll turn it over to...

In the picture book biographies I write, I need to accurately recreate yesterday’s world for my young readers. Only when kids understand how things used to be can they see how a true-life hero transformed society. So, in every book I face the challenge of building a scaffold of knowledge about the past to support my reader’s understanding.


First, I need to decide what is important for my reader to understand. I think about assumptions kids make about their world—that girls and boys both play sports, for example. I try to figure out what essential elements of the world I’m writing about kids won’t already be familiar with.
Once I know what gaps I need to fill, it’s time to build that scaffold.
I’ve learned important scaffolding skills from mentor texts. Here are strategies that ensure kids get the background knowledge they need. 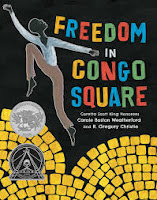 Strategy # 1: STOP THE ACTION AND EXPLAIN
If only I could just stop everything and give kids the background they need! Usually that would be death to a story but occasionally it actually works.
Freedom in Congo Square depicts the joyful Sunday music and dance of enslaved people in New Orleans. But with a topic like that, there is the danger that young readers will fail to understand that those were stolen moments within a life of oppression. So before the book even starts, a Foreword tackles the issue of slavery. 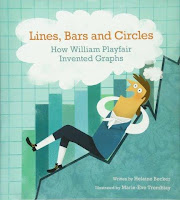 Strategy #2: GIVE NECESSARY KNOWLEDGE IN TERMS OF THE MAIN CHARACTER’S LIFE
Handily, you can often build your scaffolding as you describe your main character since the information your reader needs probably relates to that main character’s passions and desires. 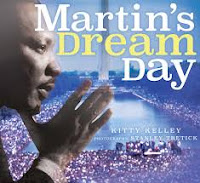 Martin’s Dream Day gives kids information about the state of civil rights in the US in 1963 by explaining Martin Luther King’s convictions:
Martin Luther King, Jr. believed in equality. For everyone—not just a few. He wanted all people to have the full rights of citizenship. That meant the right to vote, to go to school, and to get a job. In the 1960s, African Americans did not have these basic rights. 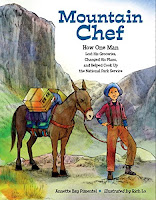 I used the same strategy in Mountain Chef. I needed to explain to kids the ugly realities facing Chinese Americans after the passage of racist laws like the Chinese Exclusion Act in 1882, so I described how my hero ended up in his job as a gourmet trail cook:
Bosses paid Chinese workers less than white workers….Most people with Chinese names ended up cooking in restaurants or washing clothes in laundries. Tie Sing, though, had…dreams as big as the country he loved. Cramped shacks weren’t for him.

Strategy #3: SHOW KIDS SOMETHING THEY RECOGNIZE, AND THEN UNDERLINE THE DIFFERENCES
One great way to scaffold kids’ understanding of the past is to start with something that they will assume they know, and then describe how it was different in the time period you’re writing about. 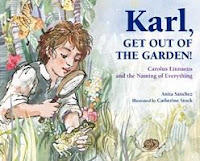 Karl, Get Out of the Garden is a biography of Karl Linnaeus, who set up the system of animal and plant classifications that we still use today. How do you get kids to imagine a world where there simply aren’t consistent names for plants and animals? Here, it’s done by talking about a plant that every kid knows.
Doctors, gardeners, farmers—everybody!—argued about the names of plants. Dandelions might be called blowball, swine’s snout, or yellow daisy—depending on which town you lived in. 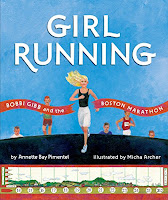 In Girl Running I knew that my soccer-playing girl readers were going to have to imagine a world very different from their own to understand the magnitude of Bobbi Gibb’s accomplishment in breaking the Boston Marathon’s gender barrier. So I start the book in a familiar environment: school.
Bobbi Gibb must wear a skirt to school because she is a girl. She is not allowed to run on the school’s track team. Because those are the rules—and rules are rules.

As young readers dive into more and more nonfiction, their understanding of the world becomes broader, richer, and more nuanced. But that growing understanding depends on the almost-invisible, but carefully-built scaffolds of knowledge constructed within the nonfiction they read.

Thanks you so much, Annette, for filling our writer's tool box with more strategies we can all use.
Annette Bay Pimentel wrote Girl Running and  Mountain Chef: How One Man Lost His Groceries, Changed His Plans, and Helped Cook up the National Park Service, the 2017 Carter G. Woodson Award winner. Every Wednesday she writes about recently-published nonfiction picture books at http://www.annettebaypimentel.com/ You can also find her on Twitter at @AnnettePimentel She is represented by Andrea Brown Literary.
Posted by Sue Heavenrich at Wednesday, February 14, 2018