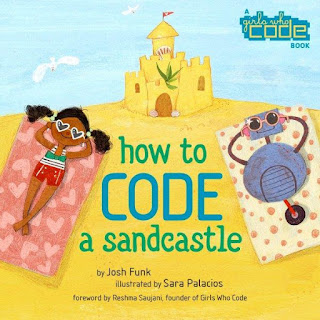 If you know how to code, you can do anything: solve big problems, design a car, print a prosthetic hand - even build a sandcastle! Which is good news for Pearl, when she heads to the beach with her robot buddy, Pascal.

All Pearl needs to do is learn how to tell Pascal what to do, and how to do it. As she learns, when telling a robot (or computer) to do something, you need to give it specific instructions. In a sequence. And if you want it to continue doing something over and over and over again, you might want to know how to create a loop of instructions.

So how did the Josh Funk, author of Dear Dragon and Lady Pancake & Sir French Toast, end up writing about coding?


GROG: Hey, Josh! How did you come up with this fun and sandy idea?

JOSH: Thanks so much for having me on the GROG! I’ve been following since the very beginning!

A  few years back, I started trying to write a fictional story that also relayed some elements of coding that was appropriate for the picture book-aged audience. And let me tell you … it was NOT easy. I went through three and a half completely different stories before landing on How to Code a Sandcastle.

GROG:  How did you determine what coding terms / instructions to focus on?

JOSH: At first, I thought back to my first computer science course in college. Second, I have kids who have been taught certain aspects of coding since kindergarten, so I’ve seen what they do. And third, I did research. (Shocking! I know!)

It turns out that sequences, loops, and conditionals are the first things the Girls Who Code movement introduces in their coding program as well.

GROG: Can you talk about the process of developing a story around showing young readers what these instructions mean and how they are used?

JOSH: This was the trickiest part. But I think things started to click when I realized two things:

First, the setting had to be something familiar to children. Starting out in a made-up fantasy world is complex enough without introducing complicated coding concepts (trust me, I tried). So when I simplified it to the task of building a sandcastle at the beach, this was key. (thank you to my critique partners who continually pushed me in this direction)

Second, I needed to not try teaching everything in a single story. There’s a LOT more coding than just sequences, loops, and conditionals. But when I also tried talking about variables, for loops vs. while loops, and pointers - that was just WAY too much (but YAY for sequels - HOW TO CODE A ROLLERCOASTER is where we learn about variables - in the fall of 2019).

GROG: Pearl tells Pascal "that's enough" - is there a way to code when to stop?

JOSH: Depending on the computer language, there are certainly ways to break out of loops. In fact, in C/C++, you would use the word break - which is why Pearl tells Pascal, ‘time for a break’ to get out of that first loop halfway through the book.

Normally, the best way to get out of a loop is to set the start and end conditions appropriately (for example, you’ll repeat something a certain number of times or while a certain condition is still true) - but that might have gotten a little too complicated for a book like this.

GROG: Aren't you worried Pascal will get sand in his bearings?

JOSH: And this is why I don’t write strict nonfiction. HOW TO CODE A SANDCASTLE is ‘informational’ fiction. Some might even say ‘speculative’ - as we don’t yet live in a world where we can instruct robots to build our sandcastles for us … at least that I know of ….