Superstition says if a person says "rabbit" on the first day of the month, good luck will follow. Lucky for readers,  Cynthia Lord has two new rabbit books!  The picture book Borrowing Bunnies is out now; Because of the Rabbit, a middle grade, debuts March 26, 2019. Read on and leave a comment to win a copy of Borrowing Bunnies! 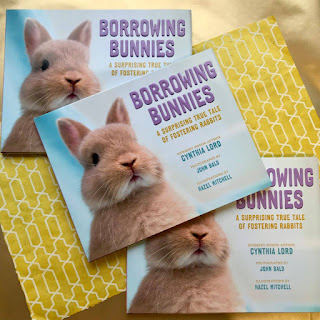 Book Reviews
Borrowing Bunnies: A Surprising True Tale of Fostering Rabbits
Written by Cynthia Lord
Illustrated by Hazel Mitchell
Photographer  by John Bald
Publisher: Farrar, Straus and Giroux
Ages: 3-6
Synopsis: From Amazon
In the spring of 2016, Peggotty and Benjamin were saved by Maine’s Cottontail Cottage Rabbit Rescue after their previous owners had neglected them. But before the two Netherland Dwarf rabbits could be adopted, Cynthia had to help them learn to trust people and feel safe inside a home. The bunnies slowly settled in, enjoying their clean pens, nibbling new foods, and playing with fun toys, while Cindy’s husband, John Bald, photographed Benjamin and Peggotty’s every step toward adoption. At that time, hundreds of viewers were drawn to Cindy’s Facebook page to watch their progress. Now, she has adapted the rabbits’ true story into a picture book that explores love, responsibility, empathy, and letting go―along with fostering’s many surprises, both big and small.
Why I love this book:


Because of the Rabbit 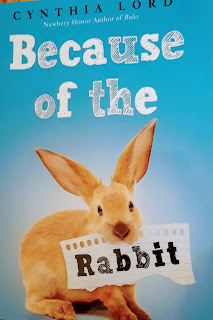 Written by Cynthia Lord
Publisher: Scholastic Press
Ages: 8-12
Synopsis: From Amazon
On the last night of summer, Emma tags along with her game warden father on a routine call. They're supposed to rescue a wild rabbit from a picket fence, but instead they find a little bunny. Emma convinces her father to bring him home for the night.The next day, Emma starts public school for the very first time after years of being homeschooled. More than anything, Emma wants to make a best friend in school. But things don't go as planned. On the first day of school, she's paired with a boy named Jack for a project. He can't stay on topic, he speaks out of turn, and he's obsessed with animals. Jack doesn't fit in, and Emma's worried he'll make her stand out.Emma and Jack bond over her rescue rabbit. But will their new friendship keep Emma from finding the new best friend she's meant to have?
Why I love this book: 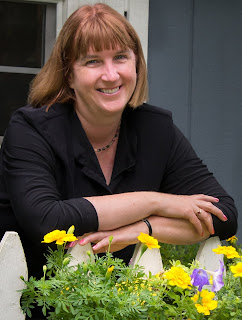 K : It’s interesting you have two bunny books out roughly a month apart. Was the creation/genesis of each book different? I know that Borrowing Bunnies began with the photographic journey of fostering bunnies from your Facebook page.


Cynthia: My stories always begin with something from real life. In both cases, the books began with rabbits, but then the idea went into two directions: a novel and nonfiction.

I’ve been involved in animal rescue for years. We’ve adopted three rescue bunnies and we also foster rabbits. Borrowing Bunnies,began when a foster rabbit gave birth at our house. My husband is a photographer so it felt like a nice opportunity to do a nonfiction book about fostering together.


When I write novels, I’m always drawn to sharp contrasts. When opposites exist within a character, situation, or setting, conflict naturally occurs. Rabbits can be sweet, gentle, and timid, but they’re also clever, fast, escape artists. So that contrast appealed to me.  Because of the Rabbit begins when the main character and her dad find a stray rabbit.

K: Your middle grade, Because of the Rabbit, also gives factual information about rabbits at the beginning of each chapter. Did you use the same research for both books?

Cynthia: Yes, though the research started years before either book. We adopted our first pair of rabbits five years ago, and I needed to learn about them in order to take good care of them. Rabbits are more complex than I first assumed. They have a strict social order and code, and in learning about that, I was amazed at the similarities and difference with our own human social codes.

K: I love the original designs for both books.  In Borrowing Bunnies, original photos taken by your husband John Bard are complemented by Hazel Mitchell's illustrations. In Because of the Rabbit, we find spot art and chapter beginnings with torn, notebook paper. Did you have input on that?

Cynthia: The combination of photographs and illustration in Borrowing Bunnies was the idea of our editor and art designer. Our editor Grace Kendall at FSG, wanted to show movement. That’s tricky in a photograph. For example, I describe a “binky” which is a joyful hop-twist. That’s hard to show in a photograph, because any image caught in mid-air doesn’t convey the right emotion. Designer Monique Sterling combined John’s photos and Hazel’s art in such an appealing, brilliant way.

With Because of the Rabbit, I was fortunate to work with editors Kate Egan and Emily Seife and designer Nina Goffi at Scholastic. The ripped notebook-paper headings were their great idea!

Emily and Nina do give me the chance to offer my opinion on the design and cover art. I see that as a gracious gift, because not every author has that opportunity. I focus my response on two questions. “Does this reflect the story well?” and “Will kids like it?” For the cover of Because of the Rabbit, I showed our preliminary cover at some school visits and asked the kids to give me some honest feedback. When a potential cover flashes on the screen in a crowded gym, I know in the first two seconds if we have a winner. After that, the kids might try to please me, but those first couple seconds are their honest opinion. It’ll either be gasps and cheering or silence.

K: Your motifs feel similar in both books. In Borrowing Bunnies, your foster rabbits move from shy to brave. In Because of the Rabbit, Emma must brave the transition from home schooling to public school. Did you plan this?

Cynthia: Wow, I hadn’t thought of that. I guess that’s a common theme in many of my books. I was a shy child and adults are constantly telling shy kids that’s not the way to be.

We often insist that children try new things, and as adults we forget how hard that is. How often do we choose to try something new outside our comfort zone? But we have some power to say no that children often don’t have.

In Because of the Rabbit, Emma goes to public school for the first time. So I looked for opportunities to do something new that scared and excited me—and to do it alone. For example, I signed up for a writing retreat on an island where I had only a few things in common with the other participants. Many of the other people already knew each other. As an adult, my impulse was to ask a friend to come with me so I’d have someone to sit with at lunch, etc. But I forced myself not to, because I knew the book would be better for it. So I went through that experience alone, as Emma did. As a writer, I paid attention. I listened to what I said, both out loud and to myself. I noticed what my body felt like. What choices I made. I kept asking myself, “Do I belong yet?” Many of those details went into the book, because whether you’re in your fifties or in fifth grade, the emotions are the similar.

K: I love this quote from Because of the Rabbit. “It’s a powerful thing to rescue something. It changes you both.” How did this idea apply to you when you began fostering rabbits?

Cynthia: Every fostering experience has moved my heart outward. The rabbits and their new adoptive families are all special to me. I get photos and notes from those families, and it’s the best feeling to see a former foster bunny happy and loved in their new home.

Not every moment in rescue is happy, though. Some rabbits come to us having experienced abuse and neglect. As a foster, I celebrate the successes knowing that sometimes our own best efforts aren’t enough. That’s the hardest thing I’ve had to face.

K: Many real life details/experiences are found in both books. This makes for a richer read. What writing advice do you have  on weaving personal experiences /passions into our work?

Cynthia: Start by thinking about things you care about and unique experiences you’ve had. Then choose something where you have some mixed feelings or parts of that experience that you don’t understand.  Something that brings up questions without easy answers.  That will bring conflict and make for a much richer story.

Every important experience in our lives has more than one emotion. There’s the emotion that you expect to feel and it’s often easy to admit to. Then there’s another emotion in that same experience: a smaller, less socially-acceptable, harder one. Often the two feelings are opposites. The smaller, harder one is more difficult to admit to, but that’s the one that will add depth to your story. It’s also the one that children need someone to say for them.

Cynthia: This winter I’ve been working on a chapter book series. I also would like to do another picture book with my husband. So for fun, we’re working on a fiction photographic picture book about our two guinea pigs.

Readers, spring into action and leave a comment to win a copy of Borrowing Bunnies signed by Cynthia Lord, John Bard, and Hazel Mitchell. 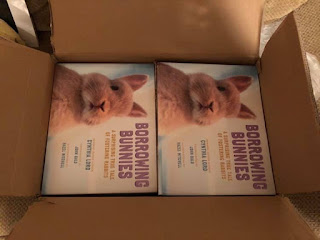 Email ThisBlogThis!Share to TwitterShare to FacebookShare to Pinterest
Labels: Because of the Rabbit, Borrowing Bunnies, Cynthia Lord, Kathy Halsey