WIDE RESEARCH: “WE ARE MADE BY HISTORY” --Guest Post by Author Beth Anderson

I, Tina Cho, want to welcome author Beth Anderson back to the Grog Blog. Both of us had debut picture books in 2018, & you can read about her previous book here. I have learned so much from Beth's blog and expertise as a nonfiction picture book writer. She's the author of An Inconvenient Alphabet: Ben Franklin & Noah Webster's Spelling Revolution (2018) and most recently, Lizzie Demands a Seat: Elizabeth Jennings Fights for Streetcar Rights. (Jan. 2020) Beth is going to show us about researching widely to get to know our character & story. Plus, you can watch her talk about the book at the end of this post. Take it away, Beth!


Martin Luther King, Jr. said, “We are not makers of history, we are made by history.” As I researched, wrote, and revised Lizzie Demands a Seat, I really got it.

I learned a lot about researching wide, as well as deep, with Lizzie’s story. As my reach widened, I saw how delving into the issues and complexities of the time and place can provide valuable insight into character and a deeper understanding of crucial emotional elements like motivation, stakes, and impact, especially when there’s limited information about a person.

I’ll show you what I mean with a few examples, along with some lines from the book, of how wide research opened the story up as I understood more about how Elizabeth Jennings was “made by history.” 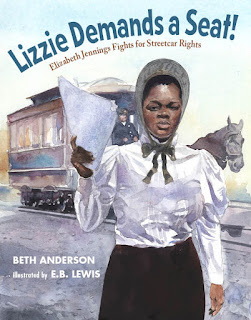 Elizabeth Jennings’ published statement revealed her cleverness, poise, tenacity, courage, confidence, and own sense of self. What shaped her character? Her abolitionist parents, certainly. But beyond the basic meaning, the more important question is how did that play out? I learned about community, social attitudes, and key ideas and goals of the African American movement to abolish slavery and obtain equal rights in the north.

·             Education – One goal was to educate both children and adults in order to better their lives. With that, the fact that Elizabeth Jennings was a teacher makes her part of a movement, which goes much deeper than a “job” and enhances her impact and commitment. As part of the movement, we understand why her fight to ride goes beyond her as an individual to a court fight that will impact all African Americans.
“This wasn’t about her. It was about dignity, about justice—ideas she’d been raised on.”

And when you add her being part of a movement to her upbringing in a home frequented by leaders like Frederick Douglass and J.W.C. Pennington, it underscores her urgency and courage when she stands strong against the conductor.
“Suddenly late-for-church wasn’t as important as late-for-equality.”

·             Public opinion – Another goal of the movement was to affect public opinion to bring about social change. They used newspapers, lectures, and personal narratives to inform, create empathy, and present the idea that democracy isn’t democracy if all can’t participate equally. Knowing about the importance of public opinion, the fact that a white witness offered to testify for her might carry more meaning as a “representative” of public opinion. The fact that no one on the streetcar objected to her presence also reinforces the idea that many whites might believe in her rights. That’s encouraging for Lizzie on more than a personal level.
“As she watched him disappear, a flicker of hope sparked. A witness. Someone who believed in her rights.”

When it came to the court case of Elizabeth Jennings v. The Third Avenue Railroad Company, I had very little information. With no court records and only a few newspaper articles about the ruling, wider research and an expert allowed deeper understanding.

·             Motivation - First, it’s easy to understand her motivation for standing firm against the conductor’s words and for taking her case to court after reading about the African American movement of the time.
“There was one place where justice for one could mean justice for all. A courtroom.”

·             Risk/Stakes – At first glance, her risk was losing due to discrimination. But looking at the history of the right to ride, I learned about a case lost thirteen years earlier that worsened discrimination. To the public, the loss appeared to support segregation. Knowing this increases her stakes and the emotional tension of her decision.
“But if she failed to win, she could make it worse. Thirteen years before, a black man lost his case for the right to ride. No one had dared try again.”

This loss also made it clear why many blacks didn’t want to push too hard for rights and believed that waiting it out was better. With this I understood how crucial community support was for Elizabeth Jennings and why she didn’t take it to court on her own.

·             Jury – While black men could vote at the time and could technically serve on a jury, tradition probably ruled and excluded them. With a white judge and jury, once again we see the importance of shifting public opinion.
“Newspapers printed Lizzie’s account. Her father spoke in churches, wrote letters and articles, and appealed for public support.”

·             Judges – In the cases that followed hers, some people won and some lost. Given her precedent, why? It turns out a judge’s instructions to the jury were key. He could emphasize business rights or individual rights and tip the case. This also provided information for a more complete courtroom scene.
“The Third Avenue Railroad Company argued for its right to do what was good for business.”

Also, after seeing how judges could tip the scale, when the judge in Lizzie’s case said that streetcars were required to carry all respectable, well-behaved people, I considered how the key words, “well-behaved” and “respectable,” could be interpreted differently by different people. No doubt Lizzie knew this all too well, and it presented an opportunity to amp up her anxiety.
“Was it ‘respectable’ to demand her rights? Was it ‘well-behaved’ to fight back? If the jury didn’t think so, they could deny her right to ride.” 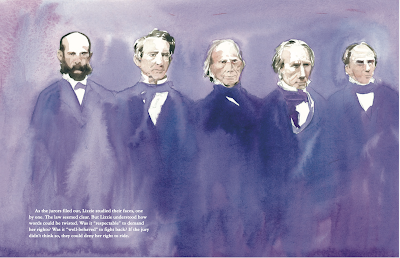 In addition to deepening the emotional impact of Lizzie Demands a Seat, wide research brought my “vital idea” into focus—no hero does it alone, change requires many, creating a “path of inspiration” through history.

It’s true – “we are made by history.” And I think that’s an important concept for us as writers.
Wide research is time-consuming work. But when Kirkus, in a starred review, said, “…Anderson’s third-person text allows readers under Lizzie’s skin…,” that was the highest praise I could ever hope for.

Thank you, Beth. That was very helpful, especially for me & my nonfiction writing. I came across Beth talking about her book on Kidlit TV and know you would all love to watch it. Click here! And below are photos of the neat shoe activity she does on Kidlit TV.

Beth Anderson loves digging into history and culture for undiscovered gems, exploring points of view, and playing with words. A former educator who has always marveled at the power of books, she is drawn to stories that open minds, touch hearts, and inspire questions. Born and raised in Illinois, she now lives in Loveland, Colorado. Author of AN INCONVENIENT ALPHABET (S&S 2018), LIZZIE DEMANDS A SEAT (Boyds Mills & Kane, 2020), and “SMELLY” KELLY AND HIS SUPER SENSES: HOW JAMES KELLY’S NOSE SAVED THE NEW YORK CITY SUBWAY (Oct. 2020, Boyds Mills & Kane), Beth has more historical gems on the way.

From the desk of Suzy aka Prairie Garden Girl--

The winners from the March 18th Giveaway are:
Charlotte Dixon
Janet Smart
Posted by Tina Cho at Wednesday, March 25, 2020