Guest post: The Power of Imagery by Beth Anderson

Beth Anderson is back with us this time with another new picture book biography--Revolutionary Prudence Wright: Leading the Minute Women in the Fight for Independence, published by Calkins Creek, February 1, 2022. Beth shares her expertise, this time, in the area of imagery. 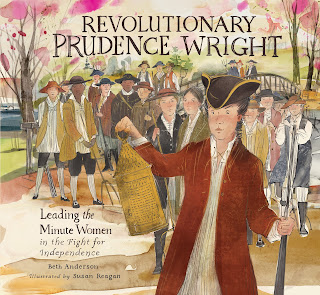 I’m a big fan of imagery – as a teacher, reader, and writer! Imagery elevates the narrative, invites lyricism, strengthens theme, and enhances heart. It’s a much used tool in my writer’s toolbox.

What exactly is imagery? Literarydevices.net defines it this way:

Imagery is a literary device that refers to the use of figurative language to evoke a sensory experience or create a picture with words for a reader. By utilizing effective descriptive language and figures of speech, writers appeal to a reader’s senses of sight, taste, smell, touch, and sound, as well as internal emotion and feelings. Therefore, imagery is not limited to visual representations or mental images, but also includes physical sensations and internal emotions.

Wow! Makes you just want to pour it on! But…imagery should be subtle and not waste words. It should flow naturally and not feel contrived. It should be sprinkled, like spices or herbs, to enrich what’s already there.

In AN INCONVENIENT ALPHABET, I placed “battle” words throughout to reinforce the idea that a revolution is more than a military battle. “Breaking free of old ways” involves many areas of our lives.

The imagery in TAD LINCOLN’S RESTLESS WRIGGLE was also in word choice. I powered the story with his wriggle as an irrepressible force of energy. This doesn’t rob him of his dignity or impose a negative judgement for the reader.

In SMELLY KELLY AND HIS SUPER SENSES, I interwove super-hero imagery with details, words, and phrases. Sensory images abound for this character with super senses.

In LIZZIE DEMANDS A SEAT!, imagery went deeper than word choice. Footsteps echo through the story—a ticking clock, heartbeats, a stranger’s approach, and, in the culmination of the heart thread, others stepping up to carry forward social justice.

I think everything I write uses alliteration, onomatopoeia, and sensory language. But when a story lends itself to using a metaphor, that’s something special! And REVOLUTIONARY PRUDENCE WRIGHT invited the opportunity…

When I dive into a story, I try to think about the different angles I might tell it from, or look for something in the setting that might ring through the story. Then I consider those ideas along with themes and the heart thread, and I start generating word lists that I can draw from as I write. This preps my brain and frames my thinking.

As I researched Prudence Wright, I collected words and phrases in my spiral, beginning with those related to revolution and independence.  One of the first items I wrote was the Thomas Paine quote that starts the story: “These are the times that try men’s souls.” I saw it as a truth, but also as leaving out women. Thus, the addition of “and women’s” seemed to fit Prudence and her story perfectly. That’s where her voice first emerged. 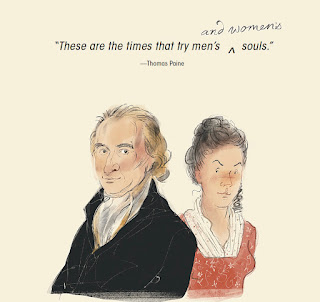 I created a word bank of military and revolution words. I wanted to show that the women’s actions were as powerful as the men’s.

Since the main event occurs in April, one of my first ideas for the “big picture” imagery of a metaphor was that of spring, gardens, and planting the seeds of independence. But, though it fit the home front idea, I knew immediately that it didn’t fit the concepts and had the wrong tone.

One of my Pepperell contacts had shared photos of a few artifacts from Prudence’s life, including her love box and lantern that could easily be used in the story. Prudence designed and created beautiful quilts, but there were no pictures available. Learning about and seeing personal items from my subject’s hands connected me in a special way. Could I use them in the story?

I listed words associated with a lantern and fire, and I also jotted down words about quilts. Could either serve as a metaphor? The idea of quilts really fit the story, not only because Prudence made them, but because they are from the hands, often involve a community of women, are made from remnants of lives, and handed down as family history.

Metaphors fall into place as I write. Lizzie’s footsteps came through during the revision process when I realized I had the pieces and just needed to connect them better. Prudence’s story was about women bound together as community and breaking old patterns. And as I worked to transition scenes, I realized that their boycott actions were like scraps for a quilt, of little consequence until joined with others. Organizing the pattern of resistance was like the larger design of a quilt. Suddenly the quilt idea popped and became powerful! And paired with the scene of the women quilting, it emphasizes that this rebellion is coming from homes. Yahoo! Don’t you just love it when it all comes together!

Illustrator Susan Reagan brought back the quilt image in the art at the end, reflecting the simile on the page, “The women weren’t organized and trained like the men, but they were bound together, like blocks of a quilt.” Use of imagery also opens up potential with illustration, and the merging of art and text tightens and strengthens the story.

The image of a quilt fit every aspect of the story. The metaphor brought abstract concepts “home,” comprehensible in a concrete and beautiful way.

Though we think of imagery as evoking images, as the definition above says, imagery is more than visual or sensory. It touches us internally, emotionally. No wonder it’s so powerful! 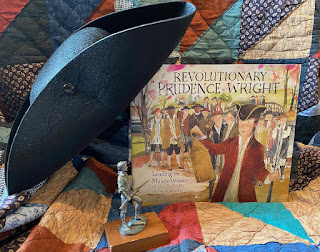 Thank you, Beth! I love this new story and the image of the quilt since my mom quilts. I love how you find unique angles on all your picture book subjects.

You can find more about Beth here! And more blog posts from Beth here and here. 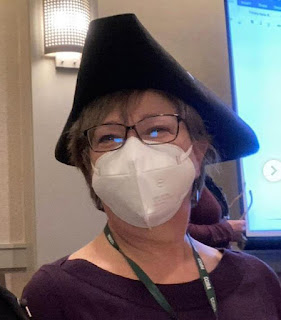 Bio: Beth Anderson, a former English as a Second Language teacher, has always marveled at the power of books. With linguistics and reading degrees, a fascination with language, and a penchant for untold tales, she strives for accidental learning in the midst of a great story. Beth lives in Loveland, Colorado where she laughs, ponders, and questions; and hopes to inspire kids to do the same. She’s the award-winning author of TAD LINCOLN’S RESTLESS WRIGGLE, “SMELLY” KELLY AND HIS SUPER SENSES, LIZZIE DEMANDS A SEAT!, and AN INCONVENIENT ALPHABET. Beth has two more picture books on the way in 2022: FRANZ’S PHANTASMAGORICAL MACHINE, illustrated by Caroline Hamel, and CLOAKED IN COURAGE: THE STORY OF DEBORAH SAMPSON, PATRIOT SOLDIER, illustrated by Anne Lambelet.