As promised from Monday's post, I found two great picture book biographies as my mentor texts for my rough draft on Mary Colter, architect of the Grand Canyon and other Southwest buildings. I've been following the wonderful Nancy I Sanders' Blogzone with her step-by-step directions to crafting a biography in one week. (Nancy also has other series for three weeks and longer. Check it out.) She recommended basing our plot on a published book to emulate pacing, conflicts, and resolution. I was lucky enough to find Jabari Asim's Fifty Cents and a Dream: Young Booker T. Washington and Sonia Sotomayor: A Judge Grows in the Bronx by Jonah Winter. 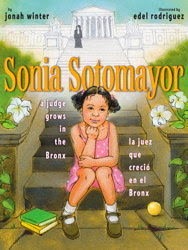 Why I Chose These Two Mentor Texts 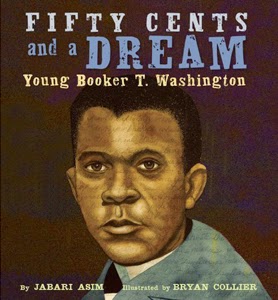 Since I am writing about a "minority," a woman who broke the glass ceiling as an architect, I wanted to see how other diverse figures broke through to their successes. Sonia Sotomayor is our first Latina Supreme Court Jutice while Booker T. Washington's journey to the Hampton Institute on foot with just fifty cents in his pocket breaks barriers of color and poverty.

Metaphors for Life
The other two themes that unified my mentor texts were the glorious way the authors and illustrators chose defining images that illuminated the lives of their subjects. Sonia was seen as a lovely flower that grew and blossomed. From the biography, "Sometimes the most beautiful moonflower blossoms in an unexpected place-on a chain link fence, near broken glass, next to an abandoned building watered by someone whose name you might not even know."
In Fifty Cents and a Dream, Asim focused on four pages in Washington's second autobiography that talked about his journey to be educated. Illustrator Bryan Collier reiterates the journey motif by depicting Washington's shirt as a map. Illustration is married to text in this slice of life biography as Asim writes in one beautiful two page spread,"He walked most of the five hundred miles to Hampton Institute. It was a journey of many days through the mountains of Virginia to reach the sea. The wind nipped at his weary bones, and the hard ground made his feet ache. But he walked on."
Poetry in Biography
I chose wisely for my mentor texts and really learned so much more about two amazing people, Sonia and Booker. The inspiration of creating a metaphor, an overarching image of a person, is so strong in these books, it makes for enjoyable reading. These poetic picture books do not sound like the boring biographies I was forced to read in school! Writers, readers, and teachers rejoice- there is a new way to write non-fiction and I plan to master this technique by reading these two books each time I write more of my rough draft on Mary Colter, architect of the Grand Canyon.