Mining Your Ideas by Pat Miller

It was the third week of January. I had asked my kindergarten students what special day was coming up on February 2. They guessed Valentine’s Day, Halloween, and Mother’s Day. I gave them a hint, “It’s the day when a small, furry animal pops up out of its hole to tell the weather.”
The five year-olds were stumped. Suddenly, one boy pumped his arm and said, “I know! I know!” When I asked him which animal popped up, he replied with enthusiasm. “It’s the armadillo!”

Not surprising for a child from Texas where there are no wild groundhogs. When the class left, I quickly jotted the conversation in my idea book. It remained there for two years until I needed to write a manuscript for credibility in my local SCBWI. After 33 rejections over two more years, Substitute Groundhog popped up out of its hiding place in my writer’s journal and went on to become a Junior Library Guild selection. It was reissued as an audio book, and was translated into French. Not bad for a “wrong” answer!

Perhaps you have a notebook or file of ideas, especially if you participated in Tara Lazar's Picture Book Idea Month. You've jotted down a lot of ideas and sparks of stories. Perhaps you’ve even earned your PiBoIdMo Badge of Completion. Now what? 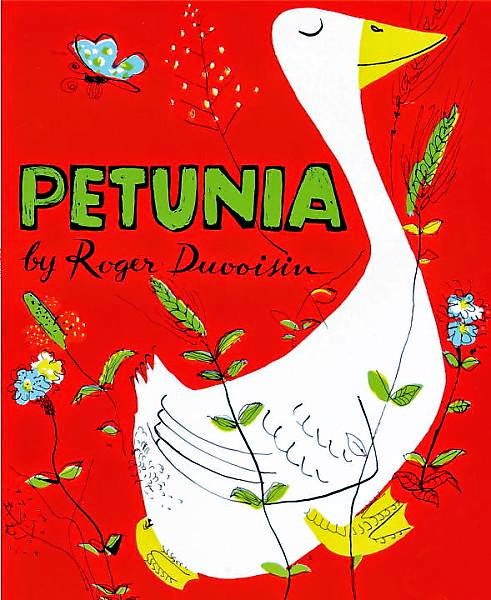 First, let me ask if you know the story of Petunia. She was a goose who thought that carrying around a thick book under her wing was enough to make her smart. It wasn’t till she deciphered the word “dynamite” as “candy”, that the disastrous results blew open the book. Only then did Petunia realize that she had to begin the hard work of reading the book to become smarter.
For us writers, it's not enough to be content with capturing ideas. Now it’s time to begin the hard work of writing or illustrating the book. It’s not enough to be smug about the ideas we have tucked under the wing of our writing journals. Today is the perfect day to take the next step.
Turn back to your idea(s) and add something to the first story that catches your imagination. Extrapolate a plot point. Describe the main character. Write down what could go wrong for the character. No need to fully flesh out the story—unless it insists you do so. Repeat the process tomorrow with your second idea. In spite of the holiday busyness, keep going to your desk each day, fanning each spark a little more until one catches fire.
This is the process that will take your ideas and carry them through to possibility. Mining your ideas each day will eventually lead you to gold. You never know what will pop up out of the ground until you dig for it. Good luck with your own armadillos!
A version of this post first appeared on December 1, 2011, Tara Lazar's Picture Book Idea Month.
Posted by Pat Miller at Monday, December 08, 2014