Cuddle the kids around at home or school and share some of the beauty, charm, humor, and awe of these titles. The books also make good gifts for beloved readers (or listeners) and could become a tradition with those you care to share the season with. 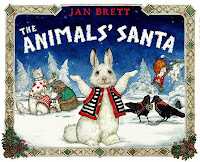 A young white rabbit seeks the identity of the animal's Santa in the central part of each beautifully detailed double spread. Brett's signature side panels reveal clues that give the reader smug, insider knowledge. Despite the snowy setting, this is a warm story to share with children. 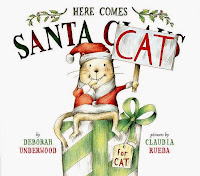 Fearing he's on Santa's naughty list, Cat decides to be Santa so he can gift himself. His efforts, told through signs, gestures, facial expressions, and wacky actions, reveal that even a naughty cat has a nice streak. Lots of humor! 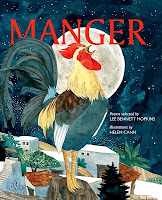 "There is a legend that describes how, at midnight on Christmas Eve, all creatures are granted the power of speech for one hour." Fifteen poems reveal what they had to say about the amazing birth in the stable. Poems are short and powerful, collage illustrations are lovely.  Family members or students can take turns reading the poems. 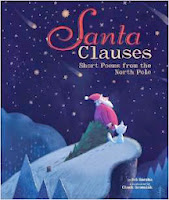 Santa's preparations during the 25 days before Christmas are told in daily haiku written by Santa. "Which is packed tighter, / the sack full of toys or the / red suit full of me?" Besides toy and list making, Santa puts sand on the slippery stoop and reads to Mrs. Claus. A fun peek into Santa's preparations as your family makes their own.

Heavenly preparations are in high gear. The Prince of Peace is on His way, and the newest angel doesn't know what to give this very special baby. When she spies the lost Magi, she realizes the best gift would be light their way in the darkness. An endearing story told with expressive illustrations. 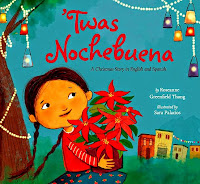 ‘Twas Nochebuena: A Christmas Story in English and Spanish by Roseanne Thong, 2014.

Think visions of buñuelos instead of sugar plums. This brightly-illustrated fiesta of a family celebration is fun to share. "For one of our holiday tradiciones, / is making tamales--not one, but montones! And every last person, both chicas and chicos, / is needed to make our tamales taste ricos!" 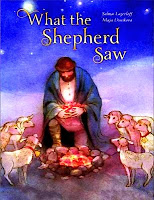 What the Shepherd Saw by Lagerlof, 2014.

Translated from Swedish, this is the story of a hard-hearted shepherd who was asked for live coals to warm a man's wife and newborn son. Intending to refuse, the shepherd was stunned to see his animals's reaction to the man. His dog does not attack and the sheep allow the man to walk on their backs to the fire. The man scooped coals from the fire, but was not burned. The curious shepherd followed the new father to a cave, where his eyes and heart were opened by what he saw. 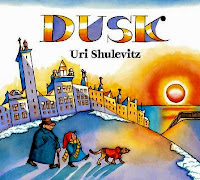 As the sun sets, the city lights up with the candles and bulbs of Hanukkah, Christmas, and Kwanzaa. Boy with dog and Grandfather with beard return home amid the revelers and shoppers. 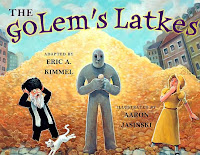 The biddable Golem is left unattended while it makes latkes for the rabbi's distracted housemaid. Like The Sorcerer's Apprentice, the Golem produces latkes until Rabbi Judah returns home with the words that make him halt. With enough latkes for the whole of Prague, the disaster turns into a big Hanukkah party. 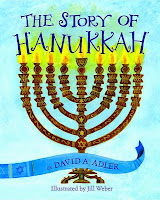 The story of Judah and the Maccabees and how they defeated the army of Antiochus IV and restored the Temple is retold with verve and drama. A recipe for latkes, reminiscent of the Hanukkah miracles, and how to play the dreidel game,whose four letters represent the Hebrew words for "A great miracle happened there," are appended. Try both! 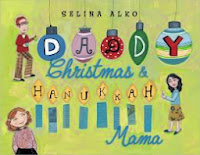 A family intertwines the two holidays with gelt under the Christmas tree, candy canes hung on the menorah, and caroling with Christmas and Hanukkah songs. Recipe for Cranberry Kugel Dressing is appended. 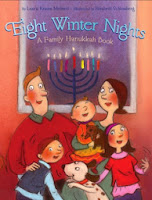 Night by night, brief poems tell of the candles and the traditional activities engaged in by grandparents, parents, and children. Warm colors enhance the celebrations. Hanukkah traditions, like gelt and the hora, are explained in more detail in the back matter. 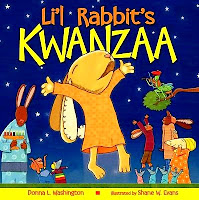 What makes this book especially accessible for younger listeners and readers, besides the cute rabbits, is what's appended. For each of the Nguzo Saba, Seven Principles, of Kwanzaa, there is an example taken from the story. For example, on Day 2: Self-determination, it's noted that "Li'l Rabbit began his search all on his own." 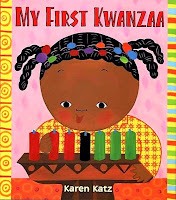 Colorful illustrations accompany child-friendly explanations of the Kwanzaa principles and a family's activities on each of the eight days of "First Fruits".

The Sound of Kwanzaa by Dimitrea Tokunbo, 2009.