Laurel Neme writes about wildlife and endangered species out of passion for animals, and to educate and inspire her readers to action. She recently published her first children’s book. 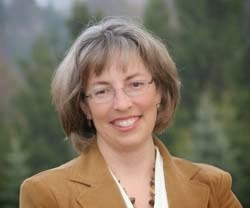 Laurel travels the world, researching and writing. She contributes to National Geographic online, hosts "The WildLife" podcast, and is author of the 2009 book Animal Investigators about the world's first wildlife forensics lab dedicated to investigating poaching, smuggling and other wildlife crimes. Laurel holds a graduate degree in public policy from the University of Michigan, and a PhD in public and international affairs from Princeton.

In 2014, Bunker Hill published Laurel’s picture book, Orangutan Houdini, about a real-life zoo orangutan, Fu Manchu. This animal loved to escape from his enclosure—and free his orangutan buddies. Once out, the apes frolicked in the trees. It wasn’t about running away; Fu Manchu enjoyed outwitting his keepers. The book tells how he did it – and his reward for his cleverness. 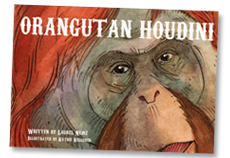 I caught up with Laurel in Vermont. We talked about writing, wildlife conservation, and making global connections with kids. Excerpts of our conversation follow.

Laurel, thanks for talking with me. I’m excited to share your thoughts with GROG readers. How did you come to write Orangutan Houdini?
In researching my first book, Animal Investigators, about solving crimes against endangered species, I was disheartened by the prevalence of apes in the illegal pet trade. I wrote several articles about orangutans, addressing orangutan biology, how orphans learn to be wild, and threats to the species.

I’ve been fortunate to meet some very special, and devious, orangutan individuals, and the more I get to know them, the more I’m enchanted. I love their intelligence and similarity to humans. They’re problem solvers, like us, and they thrive on challenging themselves. They also have a sense of humor. I heard many stories that showcased their ingenuity, with Fu Manchu just one of many examples.

Hearing that Fu was awarded honorary membership in the American Association of Locksmiths tickled my funny bone, and I knew kids would enjoy the story too. I contacted Jerry Stones (the zookeeper) and others who knew Fu, and quickly came to realize what a special ape Fu was. What makes the story so powerful is that it’s true.

Yes – truth and humor are a potent combination! How did you first get interested in wildlife and wildlife protection?
For as long as I can remember, I adored animals. Like many young girls, I was obsessed with horses, and spent time after school and on weekends at a local stable. I wanted to be a veterinarian for large animals, like James Herriot, and read his All Creatures Great and Small books voraciously. I also loved Hugh Lofting’s Dr. Doolittle series, and imagined “talking to the animals” like Jane Goodall.

My mom was a science teacher (and later a writer), and we’d watch Jacques Cousteau television specials. I started to dream of traveling to Africa when my parents went to Kenya and Tanzania in the 1970’s. They sent back daily postcards to my sister and me, and I was mesmerized by their photos of lions basking in the sunset under Kilimanjaro.

Now, things have come full circle and my childhood passion has endured.

You were trained in public policy; when did you decide to become a writer?
I became passionate about writing when I saw how vividly words influence actions. South African writer André Brink, a leading voice of dissent against apartheid, was a great inspiration. (Brink died just last week, at the age of 79.)  Brink published essays about writing in a state of siege, describing the writer’s role “as a conscience in the world.”

"The revolution I am involved in as a writer, is a revolution in the conscience of my people. . . .  Indeed, it is a slow process. One can reach one person here, another there; after a long time we may still be only a handful.  But suddenly they [will be] a crowd.”--André Brink

What do you want your writing legacy to be?
I’ve been fortunate to see how my stories affect people and reverberate down the line. About a year after my first book, Animal Investigators, came out, I received an unsolicited email from an investigator with the Brazilian Federal Police. He said, "I've never had the opportunity to really thank you for the book, so I would like you to know it was very inspiring and, in some aspects, helped me in the finalization of ‘JURUPARI,’ our recent operation against illegal logging in the Amazon."

I contacted him then, and learned that in Operation Jurupari, the Brazilian Federal Police uncovered a massive illegal logging scheme that caused an estimated $500 million in damage to the Amazon rainforest across almost 200 square miles. That’s the size of California or Spain. The list of the more than 90 people arrested read like a "who's who" of the forestry industry and included high-level government officials, business owners and private landowners.

I’ve since become friends with that investigator, and he’s now a leader in wildlife law enforcement. You never know how your words will affect somebody.

After writing regular online National Geographic contributions, and Animal Investigators for adults, what made you want to write for children?
When my son was little, I often told him stories. Sometimes he’d give me characters as a launching point, and other times I’d relate a true story about an animal I knew, like Fu Manchu. I started writing the stories down and sharing them, and found that they are more than fun tales—these stories provide insights into the animal species, and inspire readers to care about what happens to them. And when people care, they’re inspired to protect the animals.

Plus, in writing my articles I often come across interesting or funny nuggets that I can’t help but think would make great books for kids.

What are your hopes for Orangutan Houdini?
I hope children come away with both a smile and a love of orangutans. Orangutans are endangered, and there is a lot we can do to help them. But the first step is to care, and I hope meeting Fu will lead readers to want to help.

A couple months ago, after I did several school visits for Orangutan Houdini, a mom wrote me saying, “thank you for stirring up the hearts and minds of my young children.” A teacher also emailed, telling me that after my visit her students wore orange to raise awareness about the plight of orangutans. I still can’t stop smiling!

How else might kids get involved in wildlife conservation?
There are many things kids and their parents can do to help protect orangutans and other endangered species. Most important is to create awareness. The orange-wearing kids are a great example: simple, yet effective.

Kids can write letters to their local newspapers, or share articles on social media. They also get creative. One girl, Allie Boyer from California, raised awareness when she was just nine years old by creating “Borneo Bob,” a flat cutout of an orangutan that “traveled” from child to child with a letter explaining the plight of orangutans, similar to Flat Stanley.

Kids can also share information through school projects. That’s how it started for Madison Vorva and Rhiannon Tomtishen, two Girl Scouts who garnered national media attention for trying to get the bakers of Girl Scout cookies to change the source of their palm oil, because palm oil plantations are damaging orangutan habitat.

Another key way people can help orangutans is to write to companies that produce the products they use, and ask if the palm oil in them is from deforestation-free sources. That simple act tells companies that their customers care, and it makes a difference

You can also support organizations that help animals. There are many good ones, like Orangutan Outreach and Orangutan Land Trust (for orangutans), David Sheldrick Wildlife Trust (for elephants), Animals Asia (for bears) and many, many more. It doesn’t have to be orangutans. Kids can have an impact on whatever might be their passion.

My website has detailed suggestions for actions to help animals. I developed a Teacher’s Guide in collaboration with educators and orangutan scientists. It’s a free download on my author page. In addition to activities for language arts, mathematics, science and social studies, it includes ideas to inspire students to take action to help orangutans or other species.

For readers inspired to pick up Orangutan Houdini, where is it available?
It’s available from the usual booksellers as well as from the publisher, Bunker Hill Publishing. If you want a signed copy, it can be ordered and shipped from my local bookseller, Flying PigBookstore in Shelburne, Vermont.