Your Bio--Connect to Your Readership

Connect with your young fans on your website, blog, or book jacket with a kid-friendly bio.

Some tips to try:
1. Keep it short.
2. Tell something quirky.
3. Personalize with some of the favorite things in your life.
4. Be playful.
5. Add a photo.

Here are some of my favorite examples:

Sudipta Bardhan-Quallen never thought she'd grow up to be a writer. As a child, she thought of being a doctor (but she's afraid of blood), a lawyer (but she doesn't like losing arguments), a carpenter (but she's too clumsy), a model (but she likes eating too much), a presidential candidate (but she had a dissolute youth), a UN ambassador (the argument losing thing again)... almost everything but a writer.

Sudipta visits schools to share her stories and experience, and teaches writing to children and adults. She lives in New Jersey with her family and an imaginary pony named Penny.

Although Drew Daywalt grew up in a haunted house, he now lives in a Southern California home, haunted by only his wife, two kids, and German Shepherd. A Hollywood screenwriter by trade, The Day the Crayons Quit was his first book for children. His favorite crayon is Black.


Peter Brown writes and illustrates books for young whippersnappers. He grew up in Hopewell, New Jersey, where he spent his time imagining and drawing silly characters. He studied Life Lessons at the School of Hard Knocks, and then got his B.F.A. in Illustration from Art Center College of Design in Pasadena, California.


Ame Dyckman reads and writes picture books when she SHOULD be sleeping. She's the award-winning author of BOY + BOT, TEA PARTY RULES, WOLFIE THE BUNNY, the upcoming HORRIBLE BEAR (Spring, 2016), and more she can't talk about yet. Ame lives in New Jersey with her family, her crazy cat, and the characters from her books. Follow Ame on Twitter (@AmeDyckman), where she Tweets picture book reviews and pretty much everything that pops into her head.


Josh Funk grew up in New England and studied Computer Science in school. Today, he still lives in New England and when not writing Java code or Python scripts, he drinks Java coffee and writes picture book manuscripts alongside his wife, children, and assorted pets & monsters.

I have been working on my bio. Share your bios and pictures with us in the comments. Have fun! 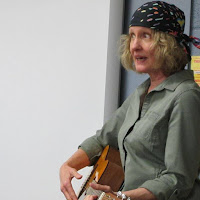 Janie Reinart wears many hats, performing as a clown in children’s hospitals, sharing original tales in schools as a musical storyteller, and volunteering as a poet in residence at an inner city school to help children find their voice. Best of all, Janie loves playing with words and writing for children. She lives in Ohio with her husband, and is always up for a game of cards, hopscotch, or dress-up. Just ask her thirteen grandchildren.