"Let us turn our thoughts today to Martin Luther King and recognize that there are ties between us, all men and women living on the Earth. Ties of hope and love, sister and brotherhood, that we are bound together in our desire to see the world become a place in which our children can grow free and strong."
James Taylor, Shed a Little Light

Last week Youth Media Awards honored writers, illustrators, and themes that shed a greater light on diversity. Matt de la Pena's Newbery winner, LAST STOP ON MARKET STREET, isn't just about those who must use public transportation or children whose parents are not present, but it addresses those issues. When I shared this winner with some suburban fifth grader writers, many told me they had never ridden a public bus. They wondered, too, why CJ spoke in a different vernacular then they did. They deemed the book full of "heart," "emotion," and noted how CJ and Nana served others at the soup kitchen. So much said and not said, but implied in LAST STOP that will generate great conversation and understanding.

This great interview w/ David Levithan at BookCon 2015 sheds more light on Matt's thinking as he wrote this gentle story.

In celebration of Dr. King's birthday, I'd like to spotlight another book that open windows and doors for intermediate/middle grade  audiences. Stay tuned for Part 2, Friday, January 22, for a review of a picture book on immigrants. 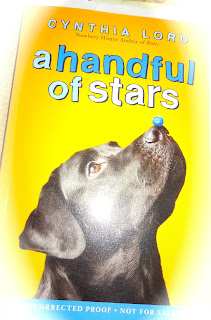 Cynthia Lord's heartfelt A HANDFUL OF STARS, focuses on the friendship of Lily, raised by French Canadian grandparents, and Salma, daughter of migrant workers. Lord has deftly set up a friendship between these two that highlights their differences and similarities while covering typical tween coming-of-age issues.

Lily makes it clear on page one that, "the only reason I ever spoke to Salma Santiago was because my dog ate her lunch." Neither group, the townies or the migrant families talk to each other. Lily continues, "I don't usually talk to those kids, and they don't usually talk to me. They don't stay here long enough for us to be friends."

Yet friends they become because they help each other become stronger and better. Examples abound:

Readers learn of the French-Candian culture and the migrant culture, both mostly overlooked in children's literature. Both families are of meager means, yet they share blueberry enchiladas and a growing awareness of each others talents and gifts. Salma paints yellow stars on her purpleberries to adorn the bee houses. (Lord explains that berries can be purple, red, black or even striped, but consumers only want the blue ones.)

Salma says, Stars are one of my favorite things. I love how when you look up at the night, it doesn't matter if you're in Florida or Maine or Michigan or anywhere, it's the same stars. So when I miss someone, I look at the stars and imagine that person seeing same ones as me. No matter where I go, I can think of them, and they can think of me. They're my star friends."  Salma's sadness in never having permanent home is eloquently stated throughout the book in terms that children can understand. (Missing friends, missing pets.)

A HANDFUL OF STARS may have been a dark horse in the Newbery contest, but I give it many stars in the sky for illuminating diverse groups we don't usually see in our canon.

Continue the conversation. Share in the comments some of your Newbery dark horses and diverse favorites. 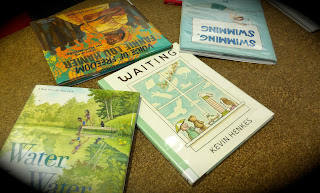