Back in July, I wrote a post about creating a picture book text by giving an old theme a new twist. Today I'm going to focus on one popular way of doing this --

Fractured fairy tales are nothing new. From way back in the 1960's comes historic proof:

Obviously there's staying power in fractured fairy tales. So, how exactly do you make a fairy tale dance to a different tune? Here are just three of the moves you can do to change a fairy tale or childhood story/rhyme.

Take a short, simple childhood rhyme or story and add to it, expand it. The crucial factor is to assure that the expansion has a story arc to it that will propel the reader forward. Jim Aylesworth has written picture books in this vein. 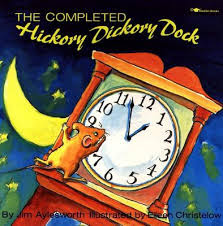 THE COMPLETED HICKORY DICKORY DOCK begins with the well-known verse and then the author extends it by following the mouse through twelve hours of the day. The book is written in verse, each stanza opens with a fun-to-say nonsense word. The reader can count up the hours as the mouse moves through the day. MY SON JOHN ends with the familiar verse. Readers follow an arc from sun-up to sun-down. Each spread depicts another child from the rural area taking part in simple activities. Son John ends the day in bed with his one shoe on. 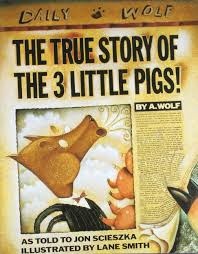 THE TRUE STORY OF THE 3 LITTLE PIGS by Jon Scieszka is a well-known example of a fractured fairy tale. The story is relayed by the wolf, who tells the "true" story of what happened with the pigs from his point of view. According to him, the whole misunderstanding was about a cup of sugar and a case of the sneezes. If you'd like to try writing something similar, take the "bad guy" of a story and examine events from his/her point of view, being sure to add lots of emotion. How does that change the story? 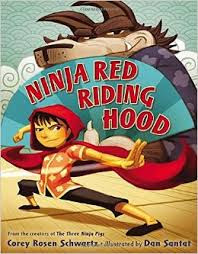 NINJA RED RIDING HOOD by Corey Rosen Schwartz. Corey has written a Ninja trilogy; each one combines a childhood tale with ninja training. The limerick verses in this one are terrifically catchy, and the author manages to work in traditional lines (e.g. "The better to see you with, my dear") with seeming effortlessness. She also dares to even out the match between Wolf and Red -- they've both had ninja lessons! Someone else shows up in a gi to help save the day. To twist like Corey does, select a well-known childhood story and add an element that kids are crazy about. Tara Lazar's "500+ Things that Kids Like" is a great source for brainstorming.

What might happen if you mash together a whole bunch of tales or characters? 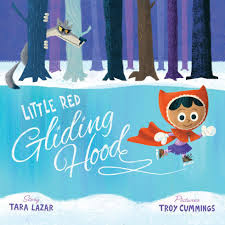 Tara Lazar's LITTLE RED GLIDING HOOD is one-part twist and one part mash up. It begins with an amazing title. Obviously "gliding" implies that Red is doing something special -- she's skating. Tara sets a goal for Red that reflects the title. What would a skater want? Why, to win a skating competition, of course. This storyline propels the reader through the story (on a ribbon of ice). But the author adds SO much more! Easily recognized characters are peppered throughout the story, and the feared big bad wolf is not-so-bad after all. Cleverness and puns abound. 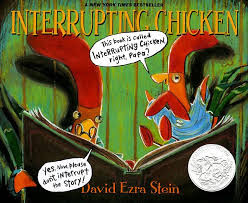 The tale in INTERRUPTING CHICKEN by David Ezra Stein combines several childhood stories, but doesn't really scramble them up. As Papa Chicken reads his Chick a bedtime story, Chick keeps interrupting the stories by jumping in them to save characters from harm.

Penny Parker Klostermann (who won the Best in Rhyme award for THERE WAS AN OLD DRAGON WHO SWALLOWED A KNIGHT) has said that INTERRUPTING CHICKEN was one of the mentor texts for her upcoming mash up, A COOKED UP FAIRY TALE (Summer, 2017). For an interview with Penny about her use of mentor texts, see the interview here.

I hope these examples will give you some ideas for fracturing fairy tales. Start dancing, writers, and see what shakes out!