But a fracture is anything but painful in the hands of Henry Herz, because Henry has been fracturing fairy tales!

His newest picture book, LITTLE RED CUTTLEFISH, is a clever take on the old childhood tale Little Red Riding Hood. The story is set in an ocean reef, where Little Red innocently heads off to deliver crab cakes to her grandmother. But a big, bad tiger shark is on the hunt for a tasty seafood snack! Little Red must use her cuttlefish defenses to save the day. Readers will cheer her on while learning a bit about sea life in the reef, too.

I recently tossed a line to Henry, asking for tips on fracturing fairy tales, and he was generous with advice.

"Thomas Keightley indicated that the word 'fairy' derived from the old French faerie, denoting enchantment.
Fairies have been flitting around literature for centuries, from Morgan le Fay (King Arthur), to Tinkerbell (J.M. Barrie's PETER PAN), to Holly Short (Eoin Colfer's ARTEMIS FOWL). You can find them in modern picture books, too, like Doreen Cronin's BLOOM, and [Henry's other new release!] MABEL AND THE QUEEN OF DREAMS, inspired by Queen Mab in Romeo and Juliet.

"But today the term 'fractured fairy tale' seems to have broadened to mean the recasting of a story, whether technically a fairy tale or not. WHEN YOU GIVE AN IMP A PENNY from IF YOU GIVE A MOUSE A COOKIE or WEST SIDE STORY from ROMEO AND JULIET are two examples of recasting stories that were not originally fairy tales. By 'recasting' we mean a new version in which the author changes the setting, the character(s), the story arc, and/or the theme.

"When I consider writing a fractured fairy tale, I start with the choice of source material. For me, it must be both a story I love and a story sufficiently well-known so that readers will recognize the provenance, or origin, of the fractured version. The latter is critical, both for market appeal, and because much of the charm of a fractured fairy tale derives from when the reader notices and appreciates the differences between the two stories. A musical analogy would be a 'cover,' like this pair of Slovakian cellists shredding AC/DC's 'Thunderstruck':


"I find the most critical writing decision is which aspects should be changed versus which aspects should be kept the same. I generally try to keep the theme intact, although it's okay to add a layer. For example, in LITTLE RED CUTTLEFISH, the setting is changed from forest to underwater, and the characters are swapped for aquatic creatures. I also changed the story arc so that the heroine resolves her own challenge. This makes her more empathetic and adds a layer of ingenuity to the original theme of beware of strangers. 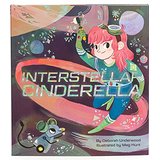 "In INTERSTELLAR CINDERELLA, Deborah Underwood not only put the story in space and makes Cinderella a skilled mechanic, she also transformed the story into rhyme!"

I would like to thank Henry Herz for his insights, and I encourage you to check out his new books. If you would like to try your hand at fracturing a fairy tale, readers, begin by studying some mentor texts - Henry provides a list here.
Tara Lazar also offers some advice here.


Go forth and fracture! Just don't get hurt in the process...