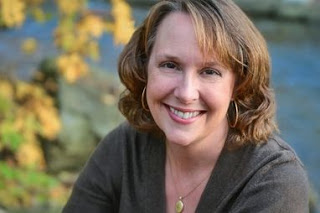 Rebecca Hirsch has written more than sixty books, from picture books to YA nonfiction, for educational and trade markets. She’s also written about science and nature for Spider and other magazines. Her most recent picture book, released just last month, is Plants Can't Sit Still. If you’ve got a wiggly-worm for a child, you’ve gotta get a copy. (I reviewed it on Friday over at Archimedes Notebook) 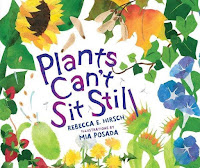 “It was a list about cool things plants can do,” she said. Her Rutgers mentor pointed out that it needed just a few things to set it straight:

The first thing Hirsch did when she went home was to closely study picture books. “I wanted to see how they start. And I discovered I could take out description because it would be shown in the artwork.” One of the books that helped her see a different way to organize material is Ducks Don’t Get Wet, by Augusta Goldin. She paid attention to how that book used a repeating line. It took her about six months, and a complete re-visioning of her story, but she found the heart of the book.

Reading the kind of book that you want to write is important, Hirsch says. One summer when she didn’t have any projects, she read 100 picture books. She chose a number of award-winners and studied how the first sentence worked; how the first page worked; what the “fresh take” was for that story. At the same time, she studied Ann Whitford Paul’s Writing Picture Books.

“It’s focused on fiction, but the rules apply to nonfiction,” Hirsch said.

Her advice to other writers? “Have more than a single project going on at once.” On any single day, Hirsch usually has four to six books in various stages of completeness. Right now she’s doing preliminary research for one, writing text for a middle grade science book, has a couple picture books in the rough draft stage. “This,” she says, “allows me to get away from one project for a couple days – and come back with more clarity.”

Every six months or so, Hirsch takes a step back and reviews her goals. She usually has two or three big goals: write a new picture book; study picture books; maybe write some poetry. She also sets herself a few minor goals that she matches to a timeline: do research, draft the story, do the back matter. She puts these on a calendar.

“Having a framework helps,” says Hirsch. “Knowing that this week I’m working on back matter helps me stay organized.”

It must be working because she’s got another book hitting the shelves in November, Birds vs. Blades. It’s about offshore wind power and protecting seabirds.
Posted by Sue Heavenrich at Monday, September 12, 2016