Pamela S. Turner has written a whole bunch of books, from picture books to biographies and science for middle-grade readers and older. Her most recent book in the Scientists in the Field series is Crow Smarts: Inside the Brain of the World's Brightest Bird. A few months earlier her book, Samurai Rising hit the shelves.

Whether it’s a tale about samurai or science, Pam loves to delve in and dig up cool facts – especially when it means getting out into the field to do research (she talks about that here). Then she works her word-magic, creating page-turning nonfiction that’s hard to put down (she reveals her secrets here).

Having two books hit the shelves in one year must take a lot of organization. How does she do it?

I try to work on one primary project,” says Pam. “I might have three or four projects in various stages. For example, I’ll be doing background research for a picture book manuscript while writing a fiction story.”

Pam also keeps an ongoing list of “interesting” topics. It’s not very long, she says – maybe ten ideas that she reviews periodically whenever she adds a new topic. “If I see an idea it as a picture book, I’ll do enough research to decide whether I want to go whole hog.” 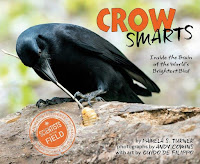 Pam does outlines. Extensive outlines. Detailed outlines. For Crow Smarts, she wrote a narrative outline prior to heading to New Caledonia to join the scientists in the field. “But…” and you can hear the shrug in her voice, “when you’re in the field, nothing goes as planned.” So out came the pencil and Pam got busy scribbling notes for a different narrative.

“Organization,” she says, “has to be tempered with flexibility.”


With all this wonderful advice, is there anything Pam wishes she’d known when she began writing?

Absolutely, she says. “If there’s a certain thing you want to do, but you’re afraid you won’t be good at it – try it anyway. At the very least you’ll learn something and it’s a good way to explore your voice. You don’t want to have regrets.”

In the normal life of a nonfiction manuscript, the author submits a proposal and then, when the book is accepted, finishes the research and the writing. Samurai Rising took a more circuitous route. Pam had written two sample chapters and a proposal, but couldn’t sell the idea. One editor even asked her why people would be interested. (Ahem! Samurai!)

This is the point at which many writers file the incomplete story in the bottom desk drawer. But not Pam. She decided to write the whole book. Then she sent it back to an editor she’d worked with before. They had rejected the proposal but loved the completed book.

“Sometimes,” says Pam, “you have to commit to something you believe in.” You can find out more about Pam and her books over at her website.
Posted by Sue Heavenrich at Monday, October 10, 2016