I "met" Heather through a 12 X 12 fabulous webinar on using beats in your picture books. I tried it on a few of  my favorite books to see how it worked, and found it fascinating. I need to use it on my own manuscripts, but I have a fear that they will come up short. That being said, I know when I do apply it, I will see some holes that I need to fill in. Heather was gracious enough to write about how she uses the book. So, Heather, take it away!

Blake Snyder's Save the Cat! The Last Book on Screenwriting
You'll Ever Need 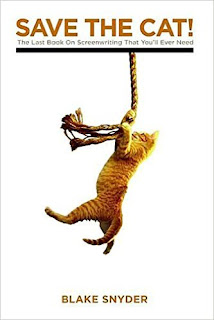 is a must read for all writers. Whenever I'm stuck on a manuscript, I turn to the official "Blake Snyder Beat Sheet" (a.k.a. the BS2). According to Snyder, this is the "measure-twice/cut-once calculation that will save you time" and build the foundation for your story.

Janice Hardy has a concise explanation of each beat as well as how they align to the three-act structure and the hero's journey.

To demonstrate, I put one of my favorite picture books, SNAPPSY THE ALLIGATOR (DID NOT ASK TO BE IN THIS BOOK) by Julie Falatko and Tim Miller (Viking, February, 2016), through the "BS2" test: 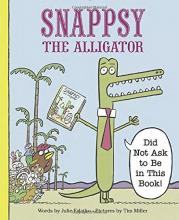 Opening image: One of my favorite parts of this book is the hidden opening image. When you take off the dust jacket, Snappsy is lying in bed in his pajamas with his bunny slippers nestled nearby. He's reading what William Shakespeare considers to be
"[t]he best book ever"; this book, the one we're reading now. Stuffed animal versions of bunny, duck, and pig, animals that appear later in the story, enjoy the book as well. "Hey! Do you mind?" Snappsy says in a speech bubble, demonstrating his contempt for us not only interrupting his bedtime routine, but also for being featured in a book that he clearly does not want to be in.

Theme stated: On the flap inside the jacket, the narrator and Snappsy have a conversation, suggesting that one shouldn't judge a book--or, in this case, a humble alligator--by outward appearances. Then, again, the reader should judge this book by its cover, as it brilliantly established the story's tone, type, and style.

Catalyst: In a Stranger-than-Fiction moment, Snappsy finds he has been cast as the main character in a children's picture book.

Debate:  Will the annoying narrator go away if Snappsy breaks the fourth wall and addresses the narrator's rude behavior directly? 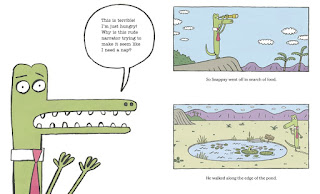 Break into Two: We only have to jump over the gutter to answer this question: no, that pesky narrator is not going away anytime soon. Because of this, Snappsy doesn't march deliberately into act two; instead he's unwillingly propelled. He is forced to leave the old world, the thesis statement, behind and enters the antithetical world, the one where he is no longer solitary and in control.

B Story: In the B story, we're introduced to new characters, such as the pig selling jungle scooters and innocent soft bunny slippers. Additional characters like the yellow rubber duck , duck, and mouse are introduced later.

Fun and Games:  After renting a jungle scooter and shimmying through the forest, Snappsy addresses the invisible narrator again, calling attention to the cardinal picture-book rule that the text shouldn't merely reiterate what's already in the illustrations. On the next page, he continues to search for food, first in a "forest" and then in a grocery store. As the fun and games continue, the discrepancy between the text and the illustrations creates tension and heightens the mood. Of all the books I analyzed, this one took the reader on the longest fun-and-games romp.

Midpoint: Fourteen pages in, Snappsy opens the door to his "surprisingly lopsided shack" and hangs a sign on the door handle that says "No Narrators Allowed." (Ironically, he hangs it over the welcome mat as the duck and mouse look on in the foreground) On the next page, he slams the door, sending the rubber duck in the wading pool flying. This is a false victory for our hero: He gets the peace and quite he's been so desperately seeking; however, he still has a ways to go before he learns the lessons he really needs. Things are worse off now than they were at the story's start because now not only do we have a ticked off protagonist, but we also have a boring story line, as demonstrated by the purposeful repetition at the bottom of the page: "He was still inside. Still inside." The rubber ducky lying upside down in a puddle next to the wading pool also symbolizes the current upside down situation.

Bad Guys Close In:  The "camera" zooms in closer; and we see a film-noir-esque silhoutte of Snappsy, emphasizing his sharp, menacing teeth, as he supposedly makes "craft plans" to "[roast] innocent forest creatures."

All Is Lost: After turning the page, we zoom in closer. Now we're inside Snappy's spacious and well-decorated home (he and Snoopy must have the same interior decorator), and it's clear that Snappsy's "crafty plans" involve eating a peanut butter sandwich and reading a book. That he refuses to subject himself to the story's narration represents another false victory for our protagonist. 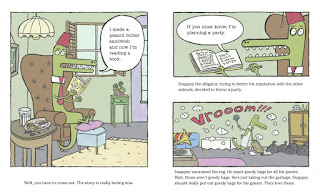 Dark Night of the Soul: After giving in and trying to appease the narrator by throwing a party to make things interesting, Snappsy loses it on the next page, a spread that emphasizes his exasperation. He goes on a long rant, the longest in the book, about how he didn't ask to be in the book. Now, he simply wants the narrator to "buzz off"! 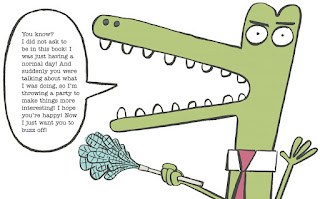 This is a "whiff of death" moment that is also hinted at two page turns later when we spot the narrator through the window, imploringly looking inside at the festivities.


Break Into Three: Snappsy reaches way, deep down and pulls out that last, best idea that will save himself and everyone around him. He opens the door and welcomes the narrator inside! The word "Welcome" scrolled across the doormat in the foreground emphasizes that this is the world of synthesis. Even the critters we saw earlier--the bunny, duck, pig, and mouse--are all here for the party.

Finale:  The party guests enjoy pudding and dancing. Both Snappsy and the narrator have learned to accommodate each other--somewhat. They've learned how mutually beneficial their relationship can be. After all, a party is never complete without a celebratory Chicken Dance. 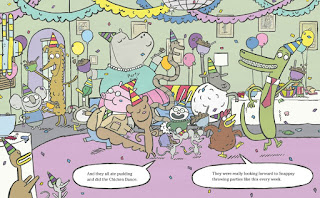 Final Image:  Under the dust jacket on the back cover, we see an image of the narrator hard at work. He sits at his desk, typing the story we've just finished. Motivational sayings like "Born to write" and "Note to self! Narrators rule!!" are pinned prominently on his wall as well as a fashionable portrait of him in a smoking jacket with a pipe, the ultimate status symbol. The number of crumbled pages in the nearby trash can all allude to the number of drafts the chicken had to write to get the story just right,while the empty pages on this desk hint that there's still more of Snappsy's story to come (the sequel, SNAPPSY THE ALLIGATOR AND HIS BEST FRIEND FOREVER(PROBABLY) was released October, 2017) 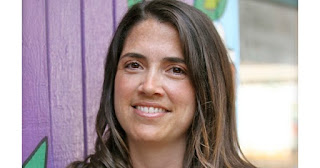 Heather Preusser earned a BA in English and art history from Williams College, an MA in education from the University of Colorado, and an MFA in creative writing from the University of Southern Maine. In her debut picture book, A SYMPHONY OF COWBELLS, a Swiss dairy cow loses her bell and disrupts the harmony of the herd When not writing, Heather teaches high school English, bikes the European countryside, and attempts to learn ridiculously long German words. She and her husband reside in Colorado.

Email ThisBlogThis!Share to TwitterShare to FacebookShare to Pinterest
Labels: A SYMPHONY OF COWBELLS, Blake Snyder, BS2, Heather Preusser, Save the Cat, Screenwriting, Sherri Jones Rivers, Snappsy The Alligator (Did Not Ask To Be in This Book