Dinosaurs, one after another, are
thumpingly what I experienced when I opened the gift package
from a children's book imprint new to me, POW! in Brooklyn.
Inside I met the characters of DON'T ASK A DINOSAUR
by authors Deborah Bruss & Matt Forrest Esenwine (pal through Poetry Friday,)
with color-pow comics-style illustrations by Louie Chin.

"If you're going to plan
a birthday party,
stop and think it through.
Be careful
what you dare
to ask a dinosaur to do."

This jolly story
romps around in rhyme, with the ways
significant dinosaurs that once partied on Earth,
might add mayhem to a child's
living room hee-haw.

I love how this book is clever in bringing to
the youngest read-aloud set, the famous but also
lesser-known
dinos, along with a specific
characteristic for each. It's fun, it's a party,
but at the same time, now I know about the one who would be a
balloon-buster, Therezinosaurus. Due to its pointy, sometimes,
three-FOOT claws, I know that (ther-uh-ZEEN-oh-sawr-us) is a non-starter,
party planning wise,
thanks to DON'T ASK A DINOSAUR.
(Not that they all wouldn't be miserable helpers, but
specifically don't task Therezinosaurus to help with stretchy air containers.) 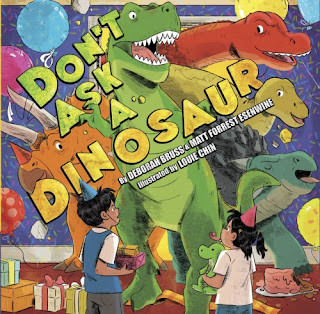 In our own family zoo, we have a super wonderful, dino-crazy Kindergarten guy
so this book stomps, crashes, tears, off to Will in Rhode Island.

I don't know about you, but when I open a p.b. new to me,
after enjoying it, I delve deeper to see what it will teach me
about creating children's books.
With this one, I think what would result if
an editor asked me to put together a birthday theme
p.b. on dinosaurs?
I do have an imagination, but my guess, since Florida never
had dinosaurs (under water then, later the peninsula was a groundsloth sauna,
etc.) I would have gone old school dull. A party decorated with a cute
dino piñata & perhaps I would have had up on a wall, a pin- (Velcro) the-tail
on the dino station. And maybe I would have had that dino jump
off the wall, dance with the kids to music. So where is the
value added in that? Where is the inventiveness?
Another plan - I might have had a birthday party of dinosaurs, by dinosaurs, for dinosaurs,
with no kids in it.  Where is the fun in that.

Go show some love for DON'T ASK A DINOSAUR.
Your family, classroom, school library will enjoy a roaring
good time with it. And learn something new, too.

And you will want to see other books from Deborah Bruss!