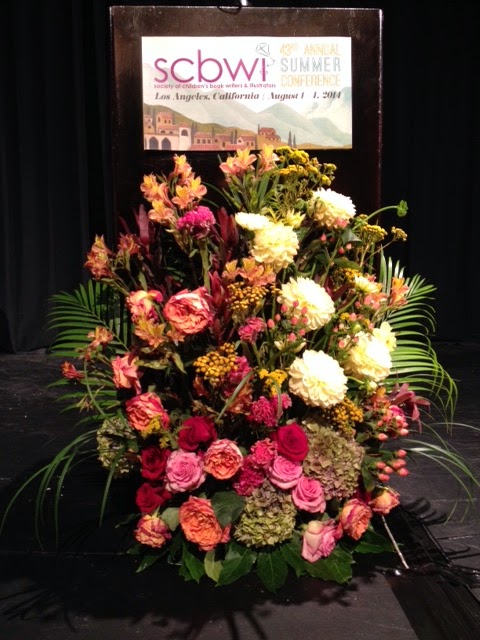 Our first convention! From our initial meeting and talking with roomies late into the night, to the closing keynote speech of Judy Blume, what a wonderful time it was.

To sum it up:
•  over 1200 writers and illustrators from 19 countries + US
•  93 editors, agents and other industry professionals
•  12 inspiring keynote speeches
•  86 instructional breakout sessions
•   4 informational panels, and
•   1 rocking party to celebrate Tomie dePaola's 80th birthday
Below is a sampling of our favorite memories and bits of advice.

Patricia: In the Editors' Panel, over half of the editors said the most important element in a manuscript was VOICE. Mary Lee Donovan said, "Voice is something you bring to a manuscript automatically. If you're writing authentically, you're writing in your voice."
Another interesting point from Allyn Johnston (Beach Lane Books) was the importance of matching the right book with the right editor. She told of having passed on SOPHIE'S SQUASH, Pat Zeitlow Miller's charming and award-winning picture book. To paraphrase, she said that it didn't connect strongly with her; had she taken it on, it might not have become the terrific book that it is.

Kathy: And speaking of SOPHIE'S SQUASH, Pat Zeitlow Miller WAS SITTING NEXT TO ME (sorry, quite excited by that) during Linda Sue Park's keynote, reviewing her award speech over and over. I wouldn't have recognized her, but as my eyes traveled the page she perused, I spied her name. I wrote her a quick note and told her to relax, that my grandson Tobin loved "the squash" and after all, we were her writing peeps. She smiled and put the speech down. What did I learn? Even famous folks have feelings of anxiety, even Golden Kite winners!

Patricia: How much do I love Megan McDonald? A lot. I went to her two breakouts plus her keynote! She offered some wonderful tips about CHARACTER. Here are a trio --
Take time to come up with a great name.
Make sure that, if you write a character of the opposite gender, you get feedback from the opposite gender.
Give your character a secret or a fault, for that is where the reader finds empathy with your character.

Kathy: A revising trick Linda Sue Park gave us was to WRITE A SECTION OF YOUR MS IN CAPS. IT IS SO AGGRAVATING TO READ, YOU WILL SURELY SLASH YOUR WORD COUNT. Also, I ran into her at the pool...one of many chance encounters with famous folk this past weekend. 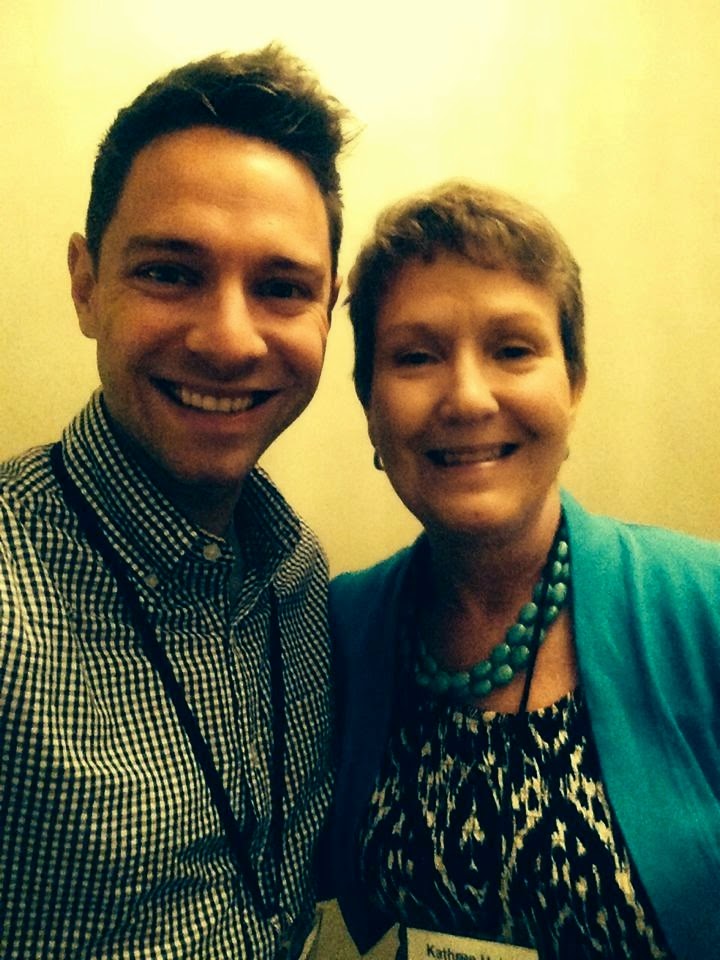 Yes, Tim Federle and Kathy Halsey in a selfie that Tim took of us.

One of the most genuine, truly nice authors I met was Tim Federle, MG author of BETTER NATE THAN EVER and FIVE, SIX, SEVEN, NATE fame. He was on the phone w/his mom when I gasped out, "Tim Federle." He cut the chat w/mom short; proceeded to chat with lil' ol' me. When he found we had a mutual friend, Brandi Stewart of Changing Hands, he snapped this selfie of us & posted to Facebook. Tim's session, 10 Things Nobody Tells You About Being a Debut Novelist, was equal parts comedy routine and good advice. He gave permission to post this widely.
One terrific tip, which I already practice, is sending handwritten thank you notes to people in the business. BTW, his character Nate discusses the concept in FIVE, SIX, SEVEN NATE, pp. 66-67: "But Libby says I should be sending handwritten notes to anyone who's nice to me! As an example: The guardian will not get a handwritten note. Bernie the First will..."

Patty: Good news for picture book authors! Several speakers referred to our current period of time as a "second Golden Age of Picture Books." But they also cautioned that the competition is fierce, so we must work to make our writing and/or art stand out. In her market report, Deborah Halverson reported that today's PBs are dominated by those aimed at a younger market, short in length, and very often character-based.

Kathy: I have reams of copious notes from the conference, but a few direct quotes from some of the standout keynoters/speakers bear repeating --

Meg Rosoff: "Kids are desperate to understand the inside of their own heads."

Stephen Chbosky: "There is no such thing as 'writers' block.' You are editing too early."

Paraphrasing Linda Sue Park: Words have become one of our cheapest currencies, so it is even more important that the words we write for kids are special.

Patricia: And a few of my favorite quotes, too --

Andrea Welch: "Don't let your submissions feel like you're throwing spaghetti at a wall. Target your agents and publishers!"

Cynthia Kadohata: "The more your research is absorbed, the more powerful your writing will become."

Judy Blume: "Determination is as important as talent."

And these last words of the conference from Lin Oliver: "It's a difficult road we've chosen. Better to go down that road, hand-in-hand and arm-in-arm, than alone." 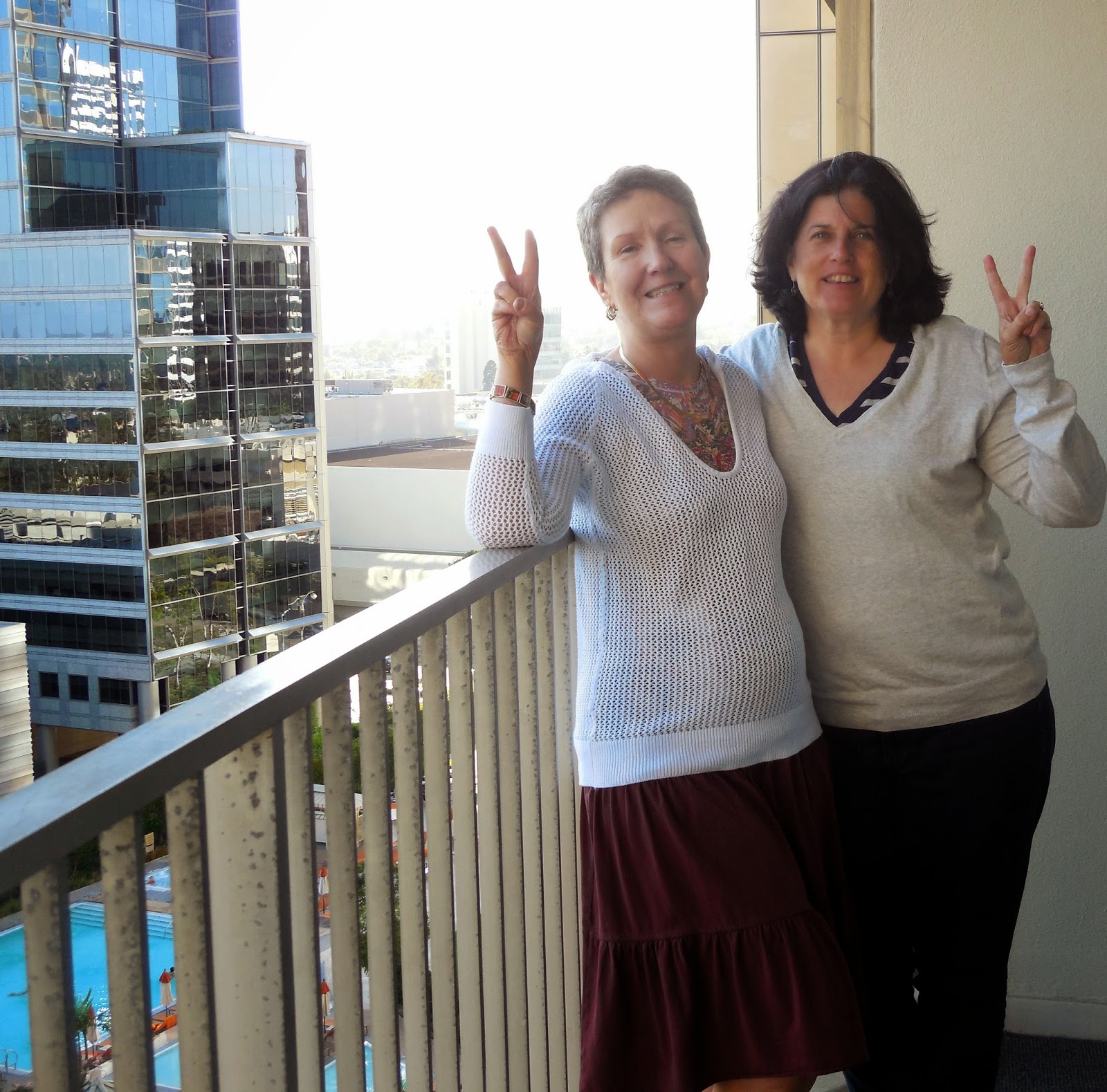 Kathy and Patricia celebrate being children's writers
from the balcony in somewhat sunny LA.