Typhoon is the Cause for Finding Hope: The Making of an eBook

“If stories come to you, care for them. And learn to give them away where they are needed.” ~Barry Lopez


One year ago, Typhoon Haiyan in the Philippines stopped being just another terrible news story for author, Suzanne Albers.

"I was upset watching the news of the catastrophe. It felt very far away. Then I spoke to a friend whose village was devastated by the typhoon, and that was when it really changed for me from a news story to a human story. "


"I thought a lot about how overwhelming an experience it must have been for the adults and especially for the children. That was where the idea for Finding Hope came from-- an e-picture book from the perspective of a child after the typhoon."


Suzanne quickly wrote the first draft of Finding Hope with the idea of using it to raise funds for the victims of Typhoon Haiyan. Next came a period of countless revisions and consideration on how to do the illustrations.


"A lucky break happened, when I received an invitation to a supporter event here in London for the charity, Plan UK, marking "Six Months On" from Typhoon Haiyan."


"I've sponsored a child through Plan UK for years, so I knew that it was a great organization. This gave me the opportunity to learn more about their work after Typhoon Haiyan and approach them about using Finding Hope to do fundraising for them."

After proposing the idea to the charity, revising and editing of the story continued, as Suzanne still struggled with what to do about the illustrations.

The staff at Plan UK were incredibly supportive during this period, providing photos and feedback on the illustrations and how to best present information on Plan's work in the aftermath of Haiyan.


With the anniversary of the Typhoon in mind as the deadline for finishing the e-picture book, Suzanne worked on it a couple hours a day for months.

"I work four days a week and have two little ones under five, so it was rare that I had a chance to work on this before 9pm. But I became good at using whatever minutes I happened to have free - 5 minutes on the tube or 10 minutes during my lunch break."

"I wish I could have done it faster, but I'm not an illustrator and I had no idea how to make an e-book, so there was a lot to learn during this time. I fell head over heels in love with two iPad apps - Book Creator and iDraw. Book Creator is both extremely powerful and straightforward to use. iDraw took more time to learn, but YouTube tutorials introduced me to its many features, and allowed me to learn by doing." 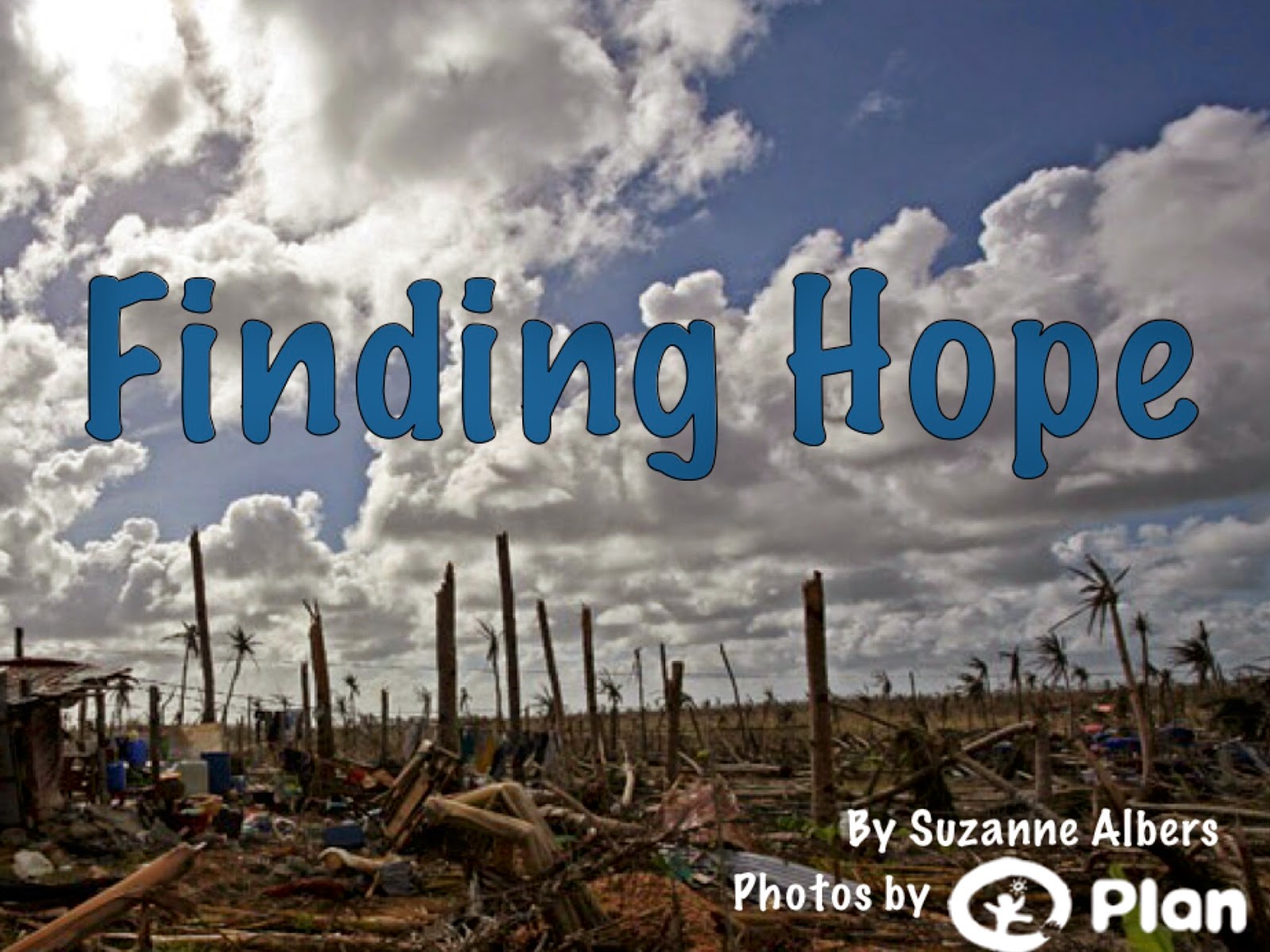 Finding Hope is a tender story that shows the impact of a natural disaster on a family and their courage and faith as they struggle to stay united and help others. Finding Hope  can be seen as a free video here.

Suzanne hopes her project will help people see that the devastation of a typhoon like Haiyan isn't over in a year. She offers her e-picture book to be used by parents and schools as a tool for discussing natural disasters with children. To help support this fund raiser, donate here.

"I'd also like to thank the many people who helped me  produce the e-book and fundraising website. Thanks so much to my amazing husband, kids and both sets of grandparents who gave me time over the last month to finish this project."

"Thank you to my wonderful critique groups - the Scribblers and Spoons - and friends for your help on the many, many drafts of Finding Hope. Thanks again to the amazing people at Plan UK for all of their support."

Suzanne, we at the Grog thank you for taking the story that came to you, for caring for it and for giving it away where it was needed. You are a wonderful role model for all of us. Much success with your fund raiser for the victims of Typhoon Haiyan.

Suzanne Albers is a rating analyst by day, mother of two by night and weekends and a picture book writer for those occasional minutes between the two. She grew up in NJ and has lived in London for 14 years.
Posted by Janie at Friday, November 21, 2014