My Research Process and Using Primary Resources in Your Writing

My Research Process and Using Primary Resources in Your Writing

When it comes to writing narrative nonfiction, primary sources are like gold for a writer. Primary sources, “...are defined as the direct evidence of a time and place that you are studying – any material (documents, objects, etc.) that was produced by eyewitnesses to or participants in an event or historical moment under investigation.”

Last year, while exploring picture book topics for PiBoIdMo, I came across a fairly random article that mentioned that Orville Wright had flown in a C-69 Constellation in 1944.  I knew he passed away in 1948, and this got me thinking about when Orville ‘stopped’ flying.  The idea of Orville’s ‘final’ flight intrigued me.  I knew all about his first flight, but I had no idea about his last.

I started researching voraciously.  I started, like I usually do with Google.   The pitfall with Google is that you can start on one topic and several hours later be lost in a rabbit hole of information.  When I begin researching, especially when using Google,  the first thing I do is open Easybib and start a new project.

Then, every single web page, article or video I watch or read of merit gets added to the bibliography.  It’s much easier to remove sources than to add them later. Easybib has an app that you can use to scan the barcode of any book source. It automatically adds the book to your project’s bibliography.  Best of all, Easybib is free!

The second thing I do is print out those sources I think I may want to dig into more carefully. I have found an outstanding tool that I use in the Chrome browser that makes printing from web pages pleasant.  It is called Print Friendly.

It gets rid of all the advertising and navigation and even has some very handy tools that can allow you to tweak the PDF to your liking.  These print outs then get put into my research file for each and every topic I begin exploring; you never know what might evolve out of your research.

I have a file box that I keep my writing projects in.  Each project has two folders.  The first is my ‘research file.’  Here is where I keep copies of web pages, articles from magazines, newspapers, etc.  The second file is where I keep drafts, story maps, diagrams, etc.  I print out each draft (and all the comments, additions, etc) as they are created.

Next, I broaden my search to my public library.  A lot of times I get a preview of books that might be helpful using Google Books.  This gives me a title that I can then reserve from my public library. I used to think that if a book was not available at my library, I was out of luck.  I learned that just about any book can be found on Worldcat.  If a book is available on World Cat, there’s a very good chance that your library can arrange an interlibrary loan. It often takes more than a month to get the book, but if you have time, it is a very good way to get valuable resources for free.

Next, I explore magazines and newspapers from the time of
the event.  If you have a library card, you probably have free access to a variety of databases.  I couldn’t believe the wealth of tools I could access through my library.

For Orville Wright, I learned about his specific ‘final flight’ on April 26, 1944,  and then started reading the national papers to see if there was any mention.

At some point in my research, I stumbled upon a very weird nugget of information.  I saw that there was an obscure reference to a US Army Film that had the keywords:  Wright Field, C-69 and Constellation.  I printed out the reference not realizing exactly what I had found.  When I tried to dig a little deeper, I couldn’t find out any more.  I didn’t realize it, but the film was actually housed at the National Archives in the Washington, D.C. area.  I called and shared the file number and asked a helpful person there at the archives if the film was digitized and if so could I download it somewhere.  They told me that it was not digitized, and the only way I could ‘view’ it was to come to the archives.

A few months later was my spring break and I was D.C. bound.  One of my best friends lives out that way, so we met up and then ventured to the capitol.  It was pretty amazing to enter the archives.  I had no idea what to expect, but security and the rules there were very tight.  You couldn’t bring any notebooks, pens, etc.  All writing tools and resources were provided to you inside the research areas.  You were, however,  allowed to bring phones, cameras, etc. to make your copies of the information.

After submitting a detailed request, we were given official researcher identification cards.  We then went up to the film desk on the fourth floor and made our request.  45 minutes later, we were ushered into a film screening room with our own editing bay.  We put on our white cotton gloves to handle the film can.  I was terrified of messing up the film so I asked the assistant to load it for me.

Me with my white cotton gloves on ready to view the film.

The editing bay where I got to see the film for the first time.


Soon, the editing bay screen came to life.  The silent film flickered and then there before me was a full account of the day.  Orville touring the great plane, inspecting it, climbing up the ladder, taking off and then coming in for a landing.  The whole event captured in one short film.  And as quickly as it started, it was over.  Weeks of planning and organizing my schedule and that was it.  Well, not actually.  I rewound it and watched it several more times.  The final time, I set up my tripod and made a copy of the film.  The archives staff assured me this was okay.  There were no copyrights on the film; it was public domain.  Here is that film for your viewing pleasure for the first time online.


Now, because we were in D.C. we had to go to the Smithsonian.  There we viewed the extensive Wright Brothers resources including the actual Wright Flyer.

The original Wright Flyer at the Smithsonian Air and Space Museum.

On my way home, I drove to Dayton, Ohio.  While there, I visited Wright State University and was able to view and make copies of several documents that pertained to my story.  I visited Carillon Park, Wright Patterson Air Force Base, and several Wright Brothers exhibits and displays. 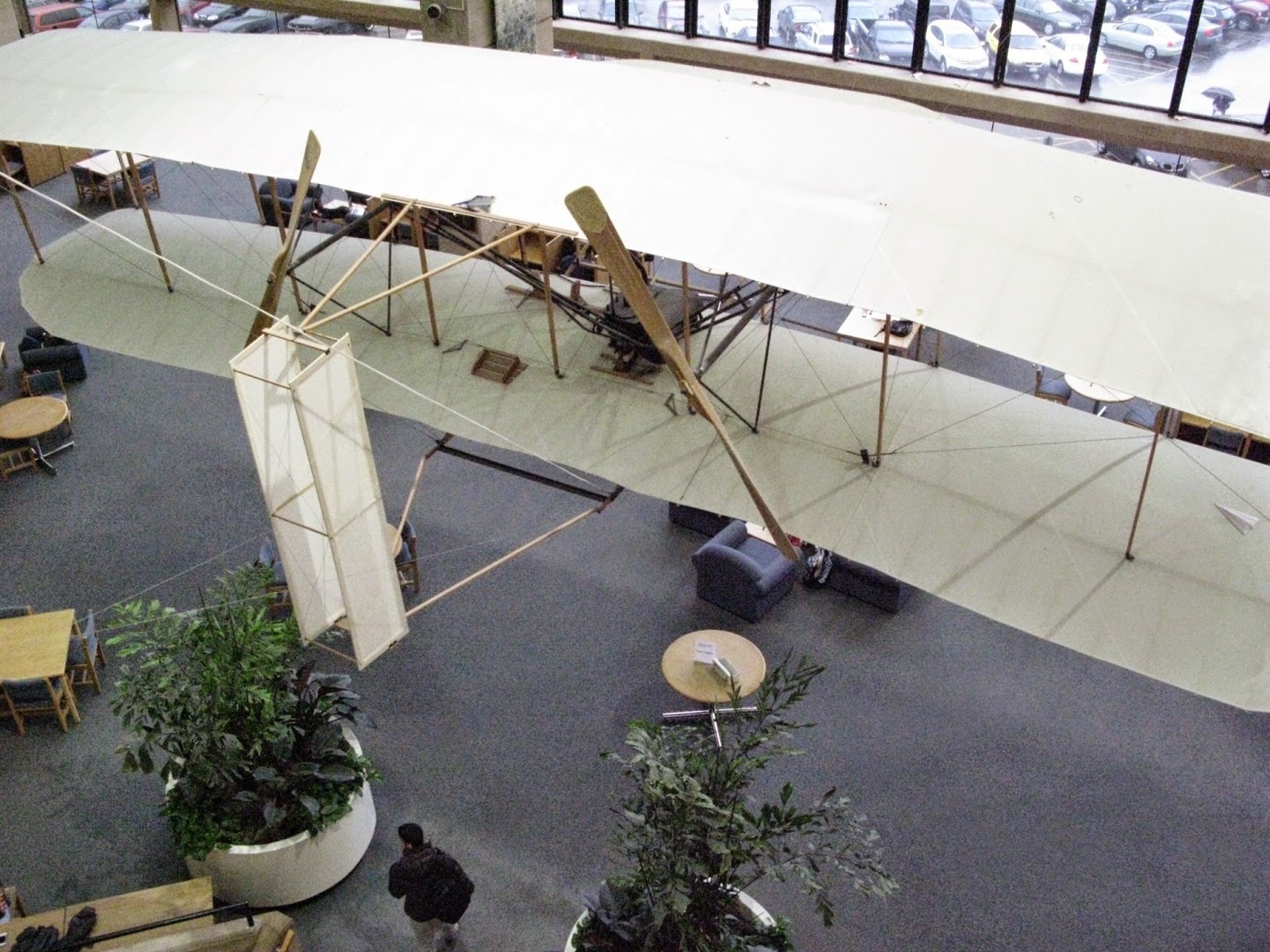 Model of the Wright Flyer suspended from the ceiling of Wright State University. 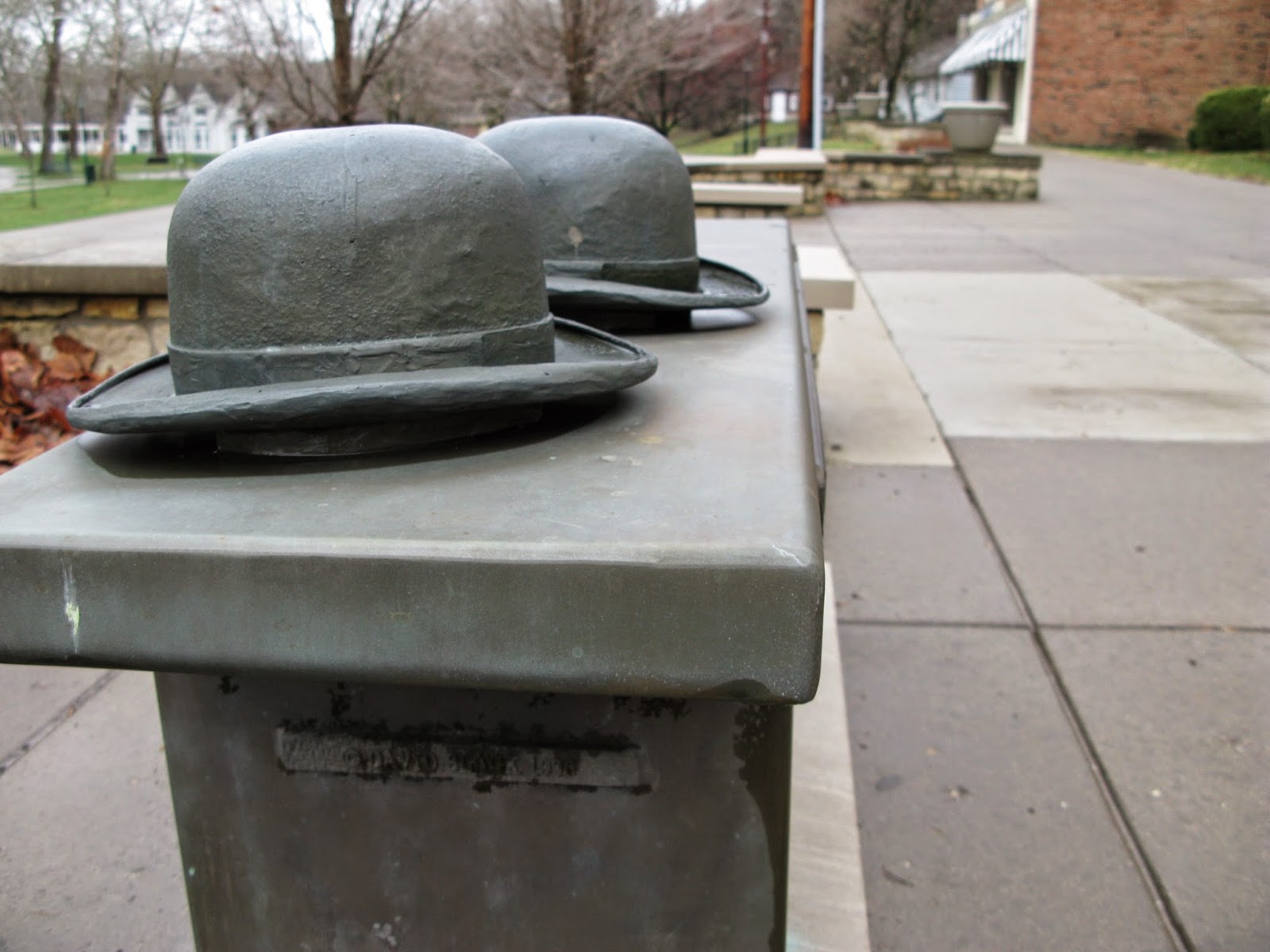 One of the coolest and most subtle Wright Brothers monuments at Carillon Park in Dayton. 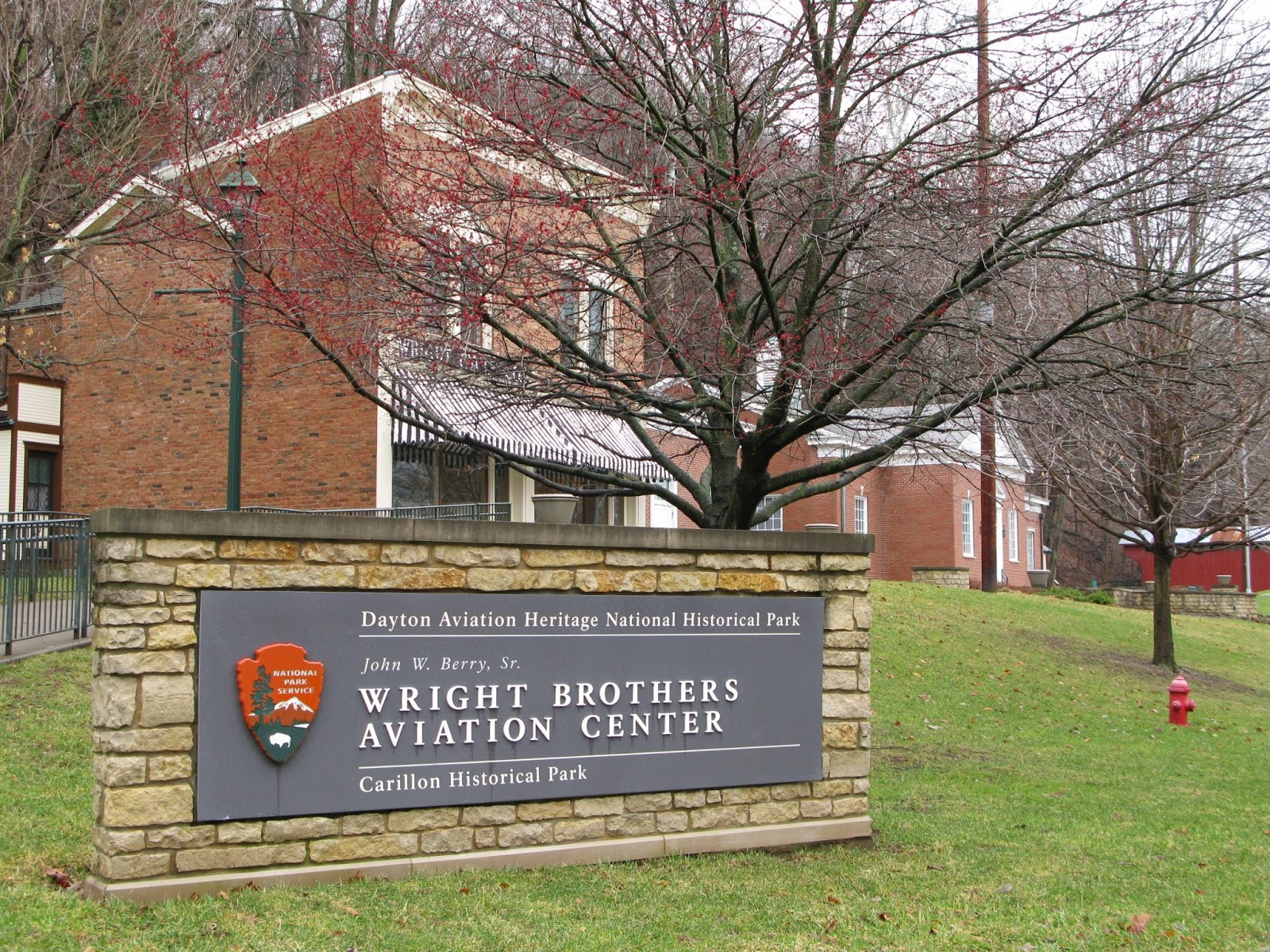 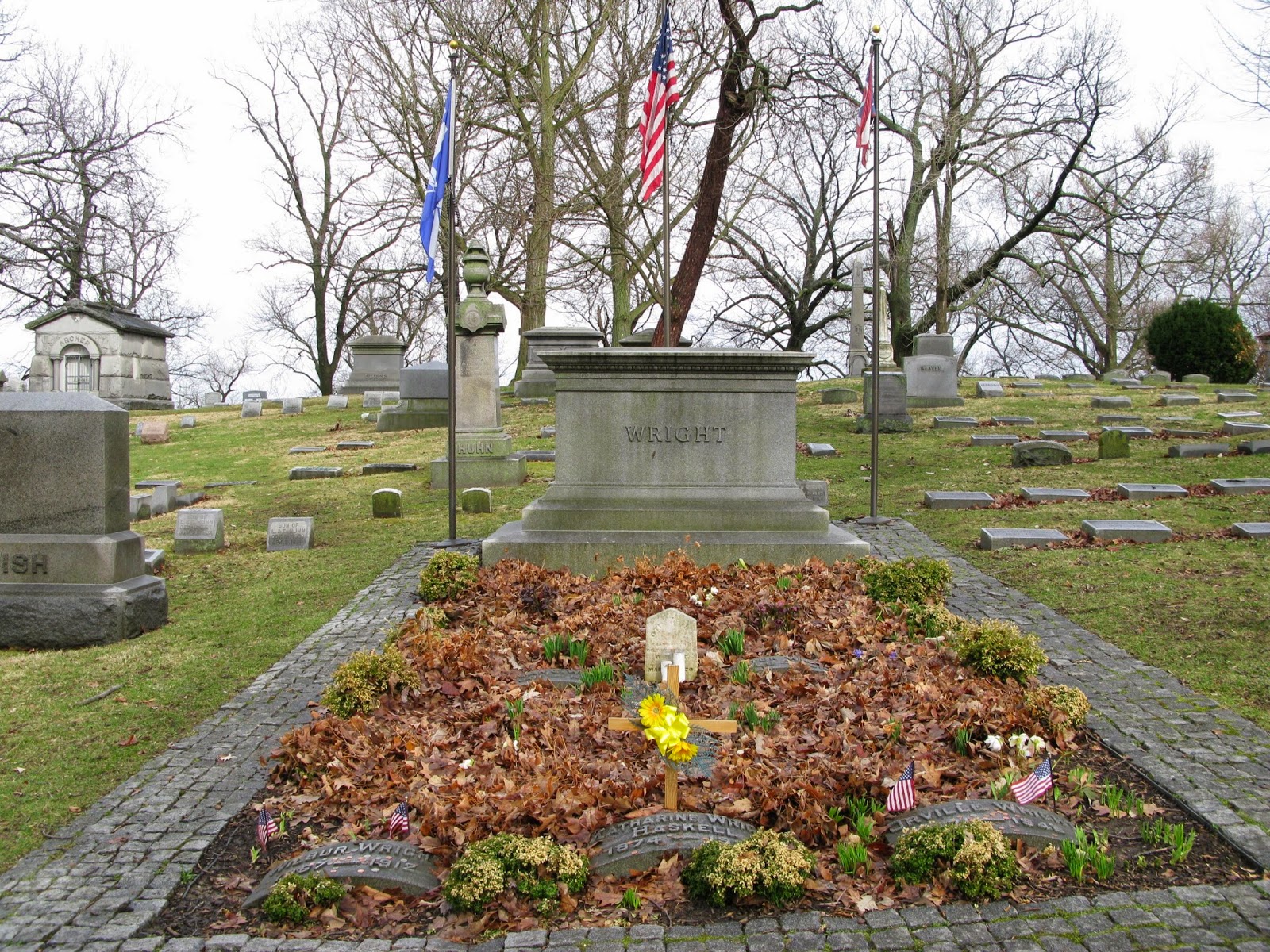 I took loads of photographs and bought way too many books, posters and models.   Hopefully someday soon I’ll be able to bring all of these as resources on school visits!

My final stop was the main Dayton Public Library.  I needed to get a copy of the original article that journaled the flight that took place on April 26, 1944.  The Dayton Daily News was not part of the database that my library had access to.  I got to use a good old fashioned microfiche machine.  The particular pages that I wanted to copy did not copy well on the microfiche, so I asked to see the original bound edition of the newspaper.  After a little grumbling by one of the assistants, they went into the bowels of the library to dig it out.  A little while later, there in front of me was the yellowed Dayton news from that very day.  It was interesting to not only read about my topic, but also the news and events from around the world that were featured in the paper.

Let me leave you with five tips to make your research process as effective as possible.