It's an honor to have Sandy Brehl back to visit us on the GROG Blog. When last she visited us, she was sharing about her first novel Odin's Promise, published by Crispin Books, an imprint of Crickhollow in 2014.  Now she is here to talk about the second book in what will be a trilogy, Bjorn's Gift. 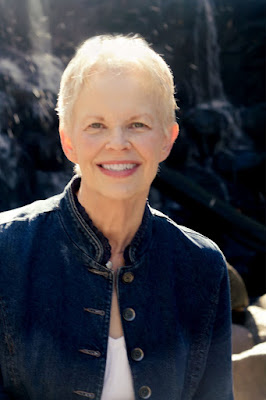 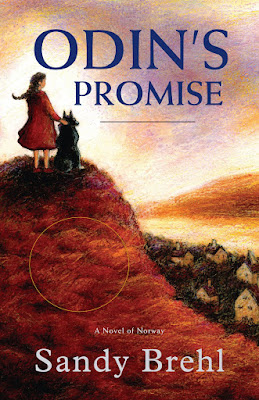 Sandy Brehl is a retired educator and active member of SCBWI (Society of Children’s Book Writers and Illustrators). When she’s not reading and writing, she enjoys gardening. She lives in the Milwaukee area and invites you to visit her website (www.SandyBrehl.com) to learn more about ODIN’S PROMISE and BJORN’S GIFT. Sign up for quarterly newsletters to stay informed about future releases (including MARI’S HOPE), and special events and offers.
Your second book continues the epic story of life during the German occupation of Norway during what becomes World War Two.  Can you share with us what it is that interested you about this time period? 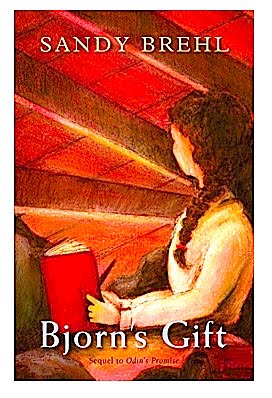 With a dad who fought in the Battle of the Bulge, I grew up knowing that  World War Two changed the fate of all of our lives. As a young reader and later as a teacher I read and shared dozens of novels about that era, including THE DIARY OF A YOUNG GIRL by Anne Frank,  SADAKO AND THE THOUSAND PAPER CRANES by Eleanor Coerr, Lois Lowry’s NUMBER THE STARS, and many others.
Throughout those readings, I assumed that Norway was neutral, as Sweden was. When I read SNOW TREASURE by Marie McSwigan, as an adult, I realized Norway had been occupied by German forces even before the United States joined the war effort.

Why did you choose to tell the story from the perspective of a young girl in Norway?

The examples I mentioned primarily featured young girl characters, but that wasn’t my original approach to this story. The anecdote that inspired me to share Norway’s war history centered on a wedding story I heard during a visit there.

I wanted it to be a book I could share with young readers. Several early versions involved a younger sister as a secondary character, a “hook” for that age group. I struggled to imagine what a young person living through five years of occupation would think and feel.

Then I found a particular research resource. It included excerpts (with translation, thank goodness) from actual journal entries written by young Norwegians throughout the years of occupation. When I read those excerpts, I suddenly viewed my years (actually decades) of research and writing attempts through Mari’s eyes. From that point on Mari’s voice in my ear pointed me toward her own story. She even made room for my original inspiration, the wedding story that inspired me

When you started with the first book, did you know that you would develop it into a trilogy?
That original story, and then Mari’s version, spanned the first year of the German occupation of Norway. That structure worked for character growth, plot, and relationships. The fact that the war (and occupation) dragged on for four more years had nothing to do with my story, which I wrote to stand alone. After spending decades getting to that point, one book was totally satisfying to me.

Almost immediately after it released, readers began asking when the sequel would appear. My editor explored several approaches with me and I dove into research. With four more years of occupation, Mari would age from twelve years old to sixteen. My first attempt was far too long.

Writing it as a trilogy was a desperate move, but the only one that made sense to me. During the second and third years of the occupation significant historic developments took place, the German pretext of being friendly occupiers dropped away, and Norwegians sustained hope that the Allies would come to their rescue.
In Bjorn’s Gift Mari ages from barely twelve to nearly fourteen, which is a distinct stage of development.
In the final book, conditions change dramatically in a different direction and Mari will be an even more independent teen, fourteen to sixteen. The only hint I’ll give beyond that is that Mari’s choices will take her beyond her tiny village into a larger city with greater responsibilities and risks. And some key characters from book two play even bigger roles in the final book.

Bjorn's Gift explores the tension around 'joining' groups, both the resistance and the Norwegian Nazi Parties.  How do you draw parallels to challenges faced by your readers today

Germany was determined to erase Norway’s identity through a frightening blend of propaganda, lies, power plays, and veiled threats. By the second year, when Bjorn’s Gift begins, the complexity of those forces affected everyone. It was clear that Germany’s world power was growing, the occupation showed no signs of ending, and life was increasingly difficult for those who resisted. Only by maintaining a firm grip on national identity, family identity, and core values could Mari or anyone else resist pressures from all sides.
Like German youth (Brownshirts), young Norwegians (Unghird) were conditioned to support the Nazis with promises of power and prestige at the sacrifice of individuality, integrity, and independence.

Young people in any time or circumstances, but especially during middle grades, face that struggle on a daily basis: standing up and speaking out against bullying; resisting peer pressure; making poor choices to elevate your social status; pressures to turn your back on true friends because they are considered “less” or “other”.

Choices are rarely clear-cut. Turning to trusted adults can be helpful, but it’s even more important to examine your own values and choices. When it comes right down to it, the only person you’ll live with forever is yourself. Who you see in the mirror, who you see in your heart, should be someone you respect.

Do you have any suggestions for our readers about how to create a character with such believability?

I am NOT Norwegian, but I visited the little village of Ytre-Arne twice with a friend who traveled there to meet her half-dozen aunts and uncles and eleven first cousins for the first time. During both trips, we visited lovely locations, but much of our time was spent in various living rooms in and around Ytre Arna, looking at photo albums and hearing stories about her family history. Many of them centered on the long occupation years, including a true story about a wedding held on their important holiday, Syttende Mai, as a subtle form of resistance. While writing various scenes I held images of rides and walks through that village in my mind’s eye, creating fictional elements that meshed with my memories.

Before I was a writer I was a reader and a storyteller. That’s the only way I know how to write. I don’t intentionally try to explore human qualities but do try to tell stories that allow them to be recognized.

Whether writing about history, contemporary stories, or even fantasy, a story’s strength and staying power depend on readers making that human connection, on drawing readers into the drama or humor or adventure in ways they can recognize, even when it’s somewhere as fantastic as Hogwarts. I’m convinced that connection only happens when universal human emotions and challenges and relationships resonate throughout the story.

That’s why making sure all readers have access to all kinds of books with diverse characters and circumstances are so important. History is an important example of that. Within books, we can find ourselves, and we can see  (and feel) ourselves in the lives of others, even decades or centuries in the past. When stories are told well, we can learn and grow within their pages without being taught a single thing.

Book three, the conclusion of the trilogy, is Mari’s Hope. It’s scheduled to release in May 2017. It was written last year but will require some thoughtful revisions to accommodate changes in the final version of Bjorn’s Gift.
Throughout this longer-than-expected process, I’ve continued writing picture book texts, (as yet unpublished), and started a contemporary middle-grade novel that’s waiting patiently for my attention until this trilogy is fully launched.
Of course, throughout it all, I read extensively, post reviews on Goodreads, blog about picture books (http://unpackingpicturebookpower.blogspot.com) and historical fiction (http://thestoriedpast.org), and participate actively in Wisconsin’s amazing SCBWI events (http://wisconsin.scbwi.org).
Whew! That sounds like a lot even to me, but I love every bit of it! 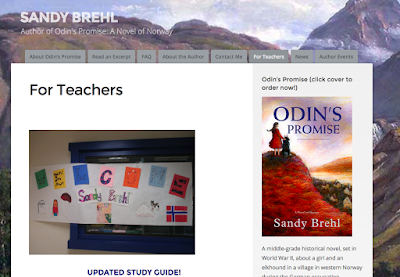 In addition to rich background on both the author and her process, Sandy offers valuable resources for teachers who want to use her books with her students.  Her For Teachers Page is a great place to start if you are wondering how to bring these fascinating characters and the time period to life.

We are so excited to have had this chance to learn more about you and the way these two fascinating books have come together.  We look forward to book three Mari's Hope in 2017.

If you want to get in touch with Sandy, or get to know here work better, take a look at the wide variety of contacts she has shared with us!