Today I (Tina Cho) welcome my writing friend and one of my critique partners--Carrie Finison! Her latest picture book, Don't Hug Doug, hit bookstores the end of January. Carrie is sharing some expert advice on writing in second person point of view and benefits of doing so. Take it away, Carrie! 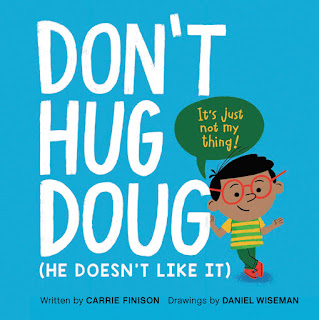 As I shared recently on Beth Anderson’s blog, the early drafts of my picture book DON’T HUG DOUG were all written in the third person, with a traditional narrative arc. An early draft of the manuscript began this way:

One day, when Doug was hammering and gluing and generally minding his own business, some relatives stopped by. They’d been invited to lunch.

Aunt Muriel wrapped him in a pillowy, billowy embrace. “Such twirly curls! And such big, brown, puppy dog eyes!”

Their hugs made Doug feel as shriveled and wrung out as a week-old balloon. But he thought it would be rude to say so.

While these endings were fun, and funny, they felt wrong because they didn’t truly solve Doug’s problem. Yes, he managed to avoid his relatives’ hugs — this time. But what about next time? Or the time after that? Eventually, he’d be right back where he started. His real problem wasn’t avoiding a single hug — it was getting his relatives to listen to him and accept the fact that he didn’t want hugs from them.

THAT problem felt insurmountable. How could Doug solve this problem? How could ANY kid solve it? The truth is, adults often don’t listen to children’s wishes when it comes to hugging (and lots of other things, too) — and often they don’t even think to ask in the first place.

Doug, I realized, could not force his relatives to listen to him — but I could. As the writer, I could make readers say things out loud. I could make them say things to each other. I could give them an invitation to interact — with the book, and with each other.

I rewrote the story in the second person point of view, addressing the reader. Here it is in published form:

The beauty of writing from the second person is that you create an interactive experience. In this case, I wanted both child and adult readers to have plenty of practice asking and answering the question, “Do you want a hug?” So I made them say it out loud, right in the text of the book. (Cue writerly cackle.) 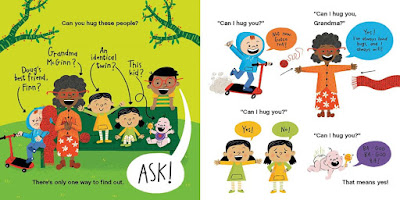 And, I could give them a chance to physically practice a high five as an alterative to hugging. 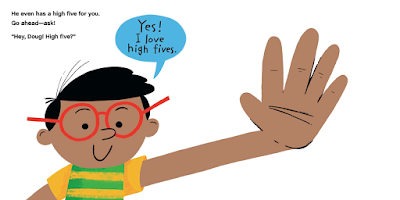 By using the second person perspective, I was not only helping my main character make his wishes clear, but also giving readers space, practice, and opportunity to think about their own wishes, and perhaps verbalize them — the takeaway that I wanted for readers from the beginning.

Thinking more broadly, the second person point of view can be helpful in an array of circumstances:

-        You want to convey a familiar childhood experience in a humorous way.

As always, the best way to get familiar with writing this way is by looking at mentor texts. Here are a few that demonstrate the broad range of what can be done with the second person point of view.

The Elephant’s Guide to Hide and Seek by Kjersten Hays, illustrated by Gladys Jose

How Do You Dance? by Thyra Heder

How to Babysit a Grandpa by Jean Reagan, illustrated by Lee Wildish

How to Wear a Sari by Darshana Khiani, illustrated by Joanne Lew-Vriethoff

If You Decide to Go to the Moon by Faith McNulty, illustrated by Steve Kellogg

If Your Monster Won’t Go to Bed by Denise Vega, illustrated by Zachariah O’Hora

The Iridescence of Birds: A Book About Henri Matisse by Patricia MacLachlan, illustrated by Hadley Hooper

The Secret Code Inside You by Rajani LaRocca, illustrated by Steven Salerno

Warning: Do Not Open This Book! by Adam Lehrhaupt, illustrated by Matthew Forsythe

When Grandma Gives You a Lemon Tree by Jamie L.B. Deenihan, illustrated by Lorraine Rocha

When Your Elephant Has the Sniffles by Susanna Leonard Hill, illustrated by Daniel Wiseman

You DON’T Want a Unicorn by Ame Dyckman, illustrated by Liz Climo 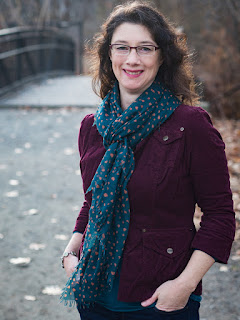 Bio: Carrie Finison writes picture books with humor and heart, including DOZENS OF DOUGHNUTS (2020), DON'T HUG DOUG (2021), and the forthcoming HURRY, LITTLE TORTOISE, and LULU & ZOEY (2022). She lives in the Boston area with her family. For updates and giveaways, subscribe to her newsletter, check out her website or follow on Twitter, Facebook, or Instagram. 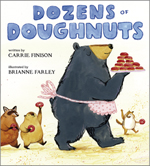