When I was in elementary school, I remember one particular fire prevention assembly we had.  Our whole school gathered in the lunchroom.  We sat on the still sticky floor and waited patiently as the librarian loaded the 16mm film into the projector.  Our principal, a frumpy, hairy faced man said something, but neither I nor most of my friends were listening. I loved the sound the projector made and when those first few clicks of the film started, we were riveted to the glowing light on the screen. This particular film featured Dick Van Dyke, my friends and I knew him as the chimney sweep from Mary Poppins.  The only thing I really remember about that film is the three word phrase that he repeated at least ten times: Stop, Drop and Roll.


Funny how ‘seeing’ something again 35 years later seems so different.  Who knows.  Maybe this was just a snippet that played a thousand times on Saturday mornings as kids across America munched their cereal in their footed pajamas.

About six weeks ago I was in the process of cleaning out my garage.  I piled all my lumber scraps on our fire pit like I’ve done hundreds of other times.  I put some gasoline on it to start the fire, walked the gas can a safe distance away and bent down to ignite the lumber.  Just as I clicked the igniter on the lighter, a gentle breeze wafted the vapors from the gasoline closer toward me.  In moments, my face, hair and hands were on fire.

It’s only happened twice in my life, but time slowed so that every second stretched for what seemed like minutes.  I remember scrunching my face to brace for the explosion.  I remember opening my eyes and seeing the flicker of the flames on my face.  I remember turning away from the burn pile and seeing my son fifteen feet away.  I called out for him to help me and felt the searing heat engulf my head.  I took two steps toward my son and then by some miracle thought to pull my t-shirt up and over my head.  As I was doing this, I fell to the ground and rolled.

As I sat up, I looked back toward the burn pile and saw that the fire had somehow spread across the grass and the nozzle on the plastic gas can was in flames.  All I could think about was that in moments that gas can, which still had gas in it, would explode sending gas and molten plastic like a bomb.  I don’t know how, but I managed to sprint over there and remove the nozzle and get the gas can out of the burn zone.  I yelled for Jack to get the fire extinguisher and in moments the whole mess was extinguished.

I asked my son, “How bad is it?”  Stunned, he really didn’t know what to say.  What do you say when you’ve seen your father’s head on fire?  So, being the nerd I am, I took a photo of my face with my phone.  There were some sections of my face that looked like they had been peeled off like a blister, and my usually pasty complexion was considerably more white but it really didn’t look too bad.  My hair was singed to the scalp.  Eyebrows and eyelashes were neater than they have been in months!  I could feel my face tightening and I knew I needed to get to the hospital.

As we entered the emergency ward, there were three people standing in line.  They took one look at me and told us to go ahead.  By this time, I my face and hands were throbbing.   After telling the whole story, they started an IV and started the pain meds.  It was decided that I would be sent to the burn unit in Milwaukee.  That was one long ambulance ride, but it felt both good and concerning to be in a place that specialized in this type of care.

The nurses let my wife visit for a few minutes, but soon needed to tend to my wounds.  “Your face is going to swell,” is about all I remember from my doctor’s overview.  By morning my head and neck had swollen to twice its normal size.  My eyes blistered and were swollen shut.  I was a mess, but it could have been so much worse.  I didn’t burn my lungs.  Amazingly I didn’t breathe in the flames or the super heated air.  And, thanks to Dick Van Dyke, I remembered to stop, drop and roll.

I had 2nd and 3rd degree burns to about 4-6% of my body.  My ears were burned the worst; a complete burn we were told.  Being a side sleeper and someone who benefits immensely from a CPAP machine, those first few weeks were the worst.  And yet, through careful tending and lots of pain medicine I can look back on this and see just how lucky I was and am.  The outpouring of prayers, cards, food and well wishes was simply overwhelming.

So this week I started back to work.  Prior to me doing so, the parent community of my school organized a sign up to have parent volunteers with me all day my first week back.  Amazingly, with all those hard working folks, our Resource Center is as ready as it can be!

I’ve learned a great deal from this event.  First and foremost is that I am a member of so many caring communities.  I learned to accept help.  I learned to be gentle with myself.

As I begin the year officially next week, I am sensitive to my students and to the parents who do not know what I’ve been through. My face looks pretty good; kinda like I got a really bad sunburn.  But I look a little different.

I plan to share a couple of titles with my students to help bridge those awkward questions and wonderings.  The first is called:  Stop, Drop and Roll by Margery Cuyler.  It has the refrain that may have saved my life in it and has a fun way of helping kids ease their worries by having a ‘plan’ should something awful, like a fire, happen. 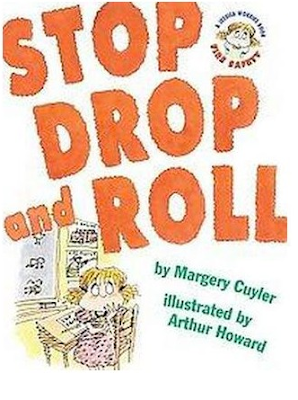 The other book is Two Eyes a Nose and a Mouth by Roberta Grobel Intrater.  This book has faces of all shapes, sizes and races.  I actually ordered a second copy that is in Arabic.  I wanted to share it and focus on the beautiful faces in the pictures.  In this way, I hoped to ease the angst students might have about what had happened to me. 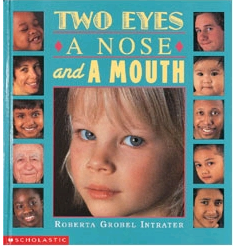 I’m beginning this school year with a full heart.  I am grateful for so much and know just how lucky I am.